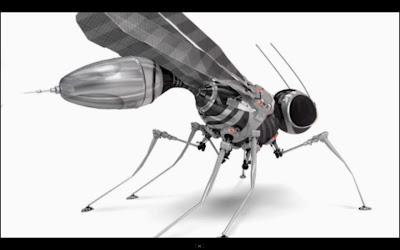 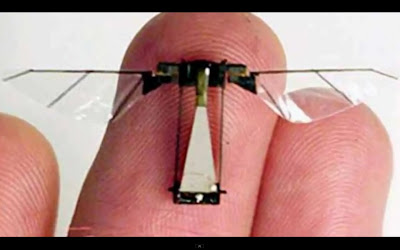 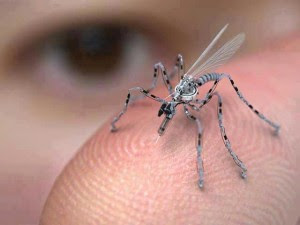 In June of 2011, the US military admitted to having drone technology so sophisticated that it could be the size of a bug.
在2011年6月，美國軍方承認無人駕駛技術是那麼複雜精密，因此它可能是一隻臭蟲般大小。
In what is referred to as the “microaviary” on Wright-Patterson Air Force Base, drones are in development and design to replicate the flight patterns of moths, hawks and other air-borne creatures of the natural world.
在賴特-帕特森空軍基地上被指為“微禽飼養場”的東西，無人駕駛飛機在開發和設計來複製自然界的飛蛾、鷹和其它空氣傳播生物的飛行模式。
Greg Parker, aerospace engineer, explains: “We’re looking at how you hide in plain sight” for the purpose of carrying out espionage or kill missions.
航空航天工程師格雷格·帕克解釋：“我們正在看你如何在眾目睽睽下隱藏，”為了進行間諜活動或殺人任務的目的。
Cessna-sized Predator drones, used to carry out unmanned attacks, are known around the world. The US Pentagon has an estimated 7,000 aerial drones in their arsenal.
塞斯納大小的“捕食者”無人機世界知名，被用於進行無人駕駛的攻擊，美國五角大樓在他們的軍火庫擁有估計大約7,000隻空中無人機。
In 2011, the Pentagon requested $5 billion for drones from Congress by the year 2030.
在2011年，五角大樓為無人駕駛飛機從國會要求到2030年有50億美元。
Their investigative technology is now moving toward “spy flies” equipped with sensors and mircocameras to detect enemies and nuclear weapons.
他們的調查性科技現正朝著“間諜蒼蠅”，裝配以傳感器和微型鏡頭來探測敵人和核武器。
Parker is using helicopter technology to allow his computer-driven drone “dragonflies” to become precise intelligence gathering weapons.
帕克在使用直升機技術，來讓他的電腦驅動“蜻蜓”無人駕駛飛機，成為精確的情報收集武器。


To have a computer do it 100 per cent of the time, and to do it with winds, and to do it when it doesn’t really know where the vehicle is, those are the kinds of technologies that we’re trying to develop.

The Defense Advanced Research Projects Agency (DARPA) has unveiled hummingbird drones that can fly at speeds of 11 miles per hour.

DARPA is also inserting computer chips into moth pupae in the hopes of hatching “cyborg moths”. 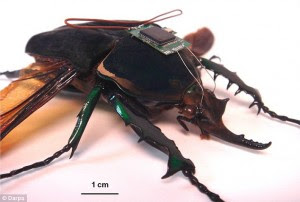 Within DARPA is the Hybrid Insect Micro-Electro-Mechanical Systems project (HIMEM), whose aim is to develop shutterbugs – insects with cameras attached to their very nervous system that can be controlled remotely. Under HIMEM, there are researchers working on cyborg beetles.

Other institutions are hard at work for the US government, developing more insect technology.

The California Institute of Technology has created a “mircobat ornithopter” that flies and fits comfortably in the palm of your hand.

A team at Harvard University has successfully built a housefly-like robot with synthetic wings that buzz at 120 beats per second.

Back in 2007, at the International Symposium on Flying Insects and Robots, Japanese researchers unveiled a radio-controlled hawk-moth.

While the US military would have the American public believe that these new “fly drones” are used for overseas missions, insect drones have been spotted surveilling streets right here in the US.

It is believed that these insect-like drones are high-tech surveillance tools used by the Department of Homeland Security. 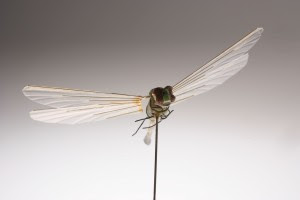 The US government is experimenting with different types of micro-surveillance capabilities, such as cultivating insects with computer chips in them in the hopes of breeding software directly into their bodies to control flight patterns remotely.

The Central Intelligence Agency (CIA) has been working on this technology since the 1970s. Known as the “inscetothopter”, it was developed by the Office of Research and Development for the CIA.


It appears to be a dragonfly; however, it contains a tiny gasoline engine to control its four wings. It was subsequently classified as a failure because it could not maintain flight against natural wind patterns.

Israel Aerospace Industries (IAI) has created a butterfly-shaped drone that is the smallest built thus far. It can hover in mid-flight, just as a helicopter and take pictures with its 0.15 gram camera and memory card.

The “butterfly” imitates nature so well, that birds and other insects are convinced it is real and not man-made.