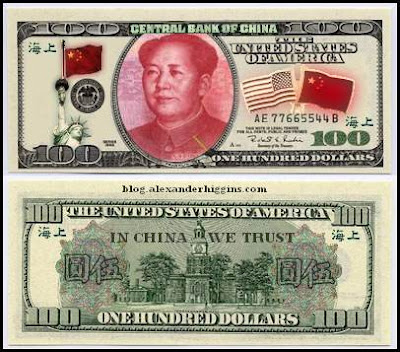 As China is expected to rise to the status of a financial superpower within the next 8 years and eclipse the US economy by 2020, Africa becomes center stage in the greatest currency war the world has seen since the 1930s, which is now shifting into overdrive.
因為中國預計在未來8年會崛起到金融超級大國的地位，和約在2020年使美國經濟失色，非洲成為自1930年代以來世界看到的最大貨幣戰爭的中心舞台，那在目前正在轉移進入超速。
Brazil, Russia, India, China and South Africa, collectively known as the BRICS nations, are moving forward with their plan to unseat the US dollar from its throne as the global trade currency and to replace it with a Chinese-denominated “super-sovereign” international currency.
巴西、俄羅斯、印度、中國和南非，統稱為金磚五國的國家，正在隨他們的計劃行動將美元從它作為全球貿易貨幣的寶座拉下馬，及以中國命名的“超級主權“國際貨幣來取代它。
This Geo-political game to establish global monetary dominance is by no means limited to the attack on the US dollar. Instead this is merely the first strike of a concerted campaign of worldwide economic warfare that will soon follow which seeks to bring the United States and its western allies to their knees.
這種地緣政治遊戲來建立全球貨幣的主導地位，是絕不僅限於對美元的攻擊。相反這僅是全球性經濟戰爭的協調一致行動的第一擊，將很快有後續以尋求使美國及其西方盟國跪低。
Ultimately the BRICS collective is staging a coup to overthrow the current global financial regime that has been dominated by the World Bank and the International Monetary Fund since the last global currency war was won at the end of World War II.
最終金磚五國正在集體上演一場政變，來推翻當前的全球金融體系，自上一次二戰結束時的贏得全球貨幣戰爭，那已被世界銀行和國際貨幣基金組織（IMF）所主導。
The attack comes partially in retaliation for the latest round of quantitative easing in which we witnessed the Federal Reserve deliberately printing trillions of dollars in an attempt to jump-start the U.S. economy by forcing investors back into the U.S. stock market by devaluing the US dollar.
攻擊出現部分是為報復最新一輪的量化寬鬆，其中我們親眼目睹美聯儲刻意印製數萬億美元，以圖通過貶值美元迫使投資者重返美國股市來迅速啟動美國經濟。
Of course, this came with the (un)intended consequence that devaluing the U.S. dollar erased the profits that nations such as China would have otherwise gained from the trillions of dollars of U.S. Treasury securities they have purchased.

Nations have gone to war for far less than trillions of dollars of bad debt, but at the end of the day it's less about the loss of profit on an investment and more about the economic sovereignty of the BRICS nations being threatened.

The devaluation of the dollar translates into real and direct economic impacts on the economies of the BRICS nations by making their products relativity more costly and in turn harder to sell at a lower profit margin.

Clearly devaluing the dollar forces the BRICS nations to pay the tab for the economic and debt woes of the United States and Europe, while destroying the economies BRICS nations in the process.

Quite frankly, the BRICS nations are pissed about all of this and China has been the most outspoken nation about it in the past.

China has already issued calls for international supervision over the US and issue demands for a single global currency due the combination of the United States debt problems and currency devaluations.

More recently attention has been placed on the escalating trade war between China and the United States, as the United States lives in a glass house while throwing stones at China for being a currency manipulator.

President Obama has even hypocritically signed an executive order creating an Inter-agency Trade Enforcement center to make China play by the rules.

Then there is the recent focus on the Rare Earth Trade war.

But in the meantime very few have paid attention to Africa which has now become ground zero for the BRICS attack to take down the global banking cartel.

In South Africa the collective is pushing the Chinese currency, the renminbi, as part of a pilot program to make the currency the new standard de facto for international trade in emerging markings, which they plan on turning into a single “super-sovereign” global currency.

The hope is that this new currency will strip the global financial regime of its power and hence relieve the United States of its role of imposing its political and economic views on the rest of the world.

Clearly the United States is well aware of this plan and has been making preparations to head off the attack for years through AFRICOM.

This is obviously apparent in the use of USAFRICOM to militarize the entire continent of Africa to fight off China’s imminent economic encroachment.

While we consider all of this, let us not forget that the currency war of the 1930s ended with the greatest military war ever fought – World War II.

For more, The Daily Paul points us to an article which informs us that Brazil, Russia, India, China and South Africa are taking the next step to rid the world of the the US Dollar as the global trade currency.


South Africa will this week take some initial steps to unseat the US dollar as the preferred worldwide currency for trade and investment in emerging economies.
Thus, the nation is expected to become party to endorsing the Chinese currency, the renminbi, as the currency of trade in emerging markets.
This means getting a renminbi-denominated bank account, in addition to a dollar account, could be an advantage for African businesses that seek to do business in the emerging markets.
The move is set to challenge the supremacy of the US dollar. This, experts say, is the latest salvo in the greatest worldwide currency war since the 1930s.

The post cites the following City Press Article which explains how the world is currently in the midst of the greatest currency war since the 1930s.

It then goes onto explain how the move to unseat the dollar is part of the BRICS plan to create a “super-sovereign” international reserve currency and overthrow the current global financial regime.


[..]
The move is set to challenge the supremacy of the US dollar. This, experts say, is the latest salvo in the greatest worldwide currency war since the 1930s.
In the 1930s, several nations competitively devalued their currencies to give their domestic economies an advantage over others.
And this led to a worldwide decline in overall trade volumes at the time.
The north will be pitted against the entire south in a historic competitive currency battle – whose terrain has moved to the Indian capital New Dehli – where the Brics (Brazil, Russia, India China and South Africa) nations will assemble next week.
China seeks to find new markets for its currency and to lobby to internationalize it throughout the Brics states.
For China this is not a new game. In 2009, senior Chinese banking officials issued a statement that the international monetary system was flawed owing to an unhealthy dependence on the US dollar and called for a 'super-sovereign' international reserve currency.
Experts say Beijing’s first step is to internationalize its currency (by expanding its reach beyond China), liberalize it (to allow its value to be determined by the market instead of actively managing it as they currently do) and then make it a reserve currency for many nations in the developing world.
Africa’s largest bank, Standard Bank, says in a research document: 'We expect at least $100bn (about R768bn) in Sino-African trade – more than the total bilateral trade between China and Africa in 2010 – to be settled in the renminbi by 2015.'
[...]
Not only will the US dollar be challenged, but also the entire international financial regime – led by the World Bank and the International Monetary Fund – which has been dominant since the end of World War II.
[...]
The demand for greater political say in international affairs dovetails with China’s expected rise as a financial superpower in the next eight years.
Vargas showed the preparatory meeting projections indicating that China’s economy will have eclipsed that of the US by 2020, hence the promotion of the renminbi as the preferred currency of the south.
The renminbi has traditionally traded at a deliberately lower exchange rate, which gave a huge boost to China’s domestic economic sectors and enabled its booming industrialization and growth.
The US and other trading partners have long accused China of being a 'currency manipulator'.
Last week, Brazil declared its commitment to keep its own currency – the real – low. Its Finance Minister, Guido Mantega, reiterated his November 2010 declaration that a global currency war has broken out.
He said: 'We do not want to lose our manufacturing sector.
'We will not sit back and watch while other countries devalue their currencies.'
Brazil and China cried foul last year when, through a slew of initiatives dubbed QE2 – quantitative easing Two – the US indirectly devalued its currency by pumping about $600bn into its economy to protect the economy from sliding back into recession.
[...]
Read Full Article