In the 1970′s he predicted gold’s meteoric rise and its 1980 top to the day. He published a full page advertisement in USA Today warning of the impending collapse of stock markets in the 1987 Savings & Loan crash – and nailed that one to the day. He saw the collapse of the Japanese real estate market and warned his clients that a depression was coming. In the late 1990′s he contacted Russian officials to advise them of an impending meltdown of their currency due to forces beyond their control – and he was right again.
在1970年代，他預測黃金如流星般曇花一現的上升及它恰好的1980年頂部。他在美國今日登出全版廣告警告將在1987年儲蓄和貸款失敗到來的股市崩潰 - 及將之固定恰好在那一天。他看到日本房地產市場的崩潰，並警告他的客戶蕭條來臨。在90年代後期他接觸俄羅斯官員建議他們，他們的貨幣即將崩潰由於超出他們控制的力量 - 及他再次是對了。
He lives in New York today, but for the better part of the last decade he was held in federal prison. His charge? Officially, nothing. Unofficially, he was held in contempt of court for nearly ten years for refusing to hand over his cyclical economic models to Goldman Sachs and the US Government. According to the powers that be, Armstrong was manipulating the world economy, and because he refused to share his prescient models, they locked him away without charge or trial – indefinitely.
他今天住在紐約，但在過去十年的較好時光，他被囚在聯邦監獄。他的指控？官方地是沒有；非官方的是，他藐視法庭被囚近十年因為拒絕將他的週期性經濟模型交出給高盛和美國政府。依據那裡掌權的人(TPTB)，岩士唐在操控世界經濟，及因為他拒絕分享他的先見模型，他們便把他未經起訴或審判就鎖起 - 無限期地。
He may sound like a fictional character out of a Hollywood blockbuster, except Martin Armstrong is the real deal, and he’s been warning of a paradigm shift unlike any we have witnessed in history.
他可能聽起來像一個出自荷里活大片的虛構人物，除了馬丁·岩士唐是真交易，及他一直在警告一項不同於任何我們在歷史目擊過的範例轉移。
With the US government expediently acting to restrict personal liberties, nearly incalculable amounts of national debt, Europe on the brink of a break up, and confusion in global asset markets, Armstrong’s Private/Public cyclical models are indicating that the world better get ready for a rough ride – and soon.
隨著美國政府權宜行事來限制個人自由、幾乎無法估量的國債、歐洲在分裂的邊緣、及全球資產市場的混亂，岩士唐的私人/公共週期性模型都在指出，世界最好準備好坎坷不平的一段 - 及快了。


Via Armstrong Economics:
通過岩士經唐濟學：
I have warned that the United States would be last to fall because it is the core economy being both the largest as well as the reserve currency. I have warned that this will not collapse into dust all at the same time. Each link will break one at a time cascading like dominos. This is not my OPINION – it is history.
我已警告過，美國將會是最後一個倒下的，因為它是核心經濟，是最大以及作為儲備貨幣兩者兼備。我已警告過這將不會在同一時间全都崩潰化為塵土。每一個的聯繫將如串連的骨牌般逐一打破，這不是我的意見 - 它是歷史。
…
Greece will be forced to leave for staying under the terms of Germany will bring civil war. Social unrest is erupting and what the US and German authorities FAIL to understand is we are dealing with a BELL CURVE and not a linear progression. There has to be balance between austerity and stimulation. It is like heat and cold. Both extremes will kill you. We survive in the middle
希臘將被迫離開逗留在德國的條款下，將帶來內戰。社會動亂在爆發，而美國和德國當局未能明白的是，我們正在處理一個鐘形曲線而不是一線性發展。要有緊縮和刺激之間的平衡，像是熱與冷。兩個極端都會殺了你，我們生存在中間。
…
It is true that rising interest rates can attract capital. However, when capital FLEES, interest rates CONTINUE to rise due to the shortage of capital. NOTHING is ever a straight line. BIG Capital is fleeing Europe and that goes to government debt because it is liquid and can absorb vast amounts.
是真的上升利率能吸引資金，然而當資本外逃，由於資金短缺利率繼續上升。沒有東西永遠是一條直線，大資金在逃離歐洲而往政府債務，因為它是流動並能吸收大額數量。
…

We have to understand what I call this Public v Private battle in confidence. This can also be called the flight-to-quality that appears during a crisis. The primary trend that is common in all economic declines is what is described as the flight-to-quality. This is at the core of capital flow for it represents the first criteria in how capital moves betweenPublic and Private Assets.

The flight-to-quality is traditionally observed by just about everyone and it is unleashed whenever confidence in the private assets collapses. Investors panic, sell private assets, and rush to government bonds driving interest rates down sharply. During the 2007-2009 crises, interest rates in the USA virtually went to zero. In other words, people were willing to accept no interest just to park their cash in a safe place they saw as government assets when they feared even banks would not survive.

The shift in this flight-to-quality attitude is always at the core of capital movement. During a generational Private Wave, investment and speculation become common place. During a Public Wave, private assets are looked upon as risky and the safer bet is to invest and trust government.

So understanding what we are facing right now is critical to our survival. We must understand that forecasting a single market in isolation is asking for disaster. To comprehend the true global implication of how capital moves, we must embrace a global correlation approach. We are headed for BIG volatility come September/October. Reality should start to make its way known going into year-end. So hold on tight. This will be a rough ride.

Source: Manipulating the World Economy Or Just Understanding How It Really Functions?


In 2012 Predictions of a Mad Tin Foilist we opined that if a collapse of the stock market was to take place in 2012, that it would originate in Europe, with investors fleeing risky assets there to the relative “safety” of none other than the US Dollar – much like they did in 2008. This flight-to-quality will be the driving force behind crashing stocks and commodities (perhaps even gold), as well as potentially devastating losses in the debt markets of Europe and Japan.

The subsequent result of this fleeing of capital from perceived and actual risk will have the effect of strengthening the US dollar, which means a potentially powerful rebound in US Treasuries as investors rush to preserve their wealth in what they believe to be the safest asset available. Yes, it sounds counter-intuitive to rush to safety in the US dollar given the state of affairs in America, but despite the constant criticism from international financial experts we remain the largest economy in the world and just so happen to control the printing presses of the world’s reserve currency.

According to Armstrong, we’re not far off from such an event, and we may very well see it take place this Fall, as uncertainty and panic grips international markets and forces the hand of governments, big banks, and individual investors.

Given his expertise in history, economics, mathematics and cyclical theory, if there is one person who may have a handle on what information to gather, how to analyze it, and what it means, it’s Martin Armstrong. He’s proven it time and again, and it looks as if his alarms are blaring.

As noted above, while panic and capital flight may significantly and negatively impact some asset classes in the very near future, we don’t have to worry about a total economic doomsday for America just yet. First, all of the money will flow here for safety. But this flight-to-quality will be short-lived, as the ever expanding national debt and government run amok will ultimately lead to a loss of confidence in the US dollar itself.

The scale of this event – this loss in confidence of the reserve currency of the richest nation that has ever existed on Earth – will be unprecedented in human history. 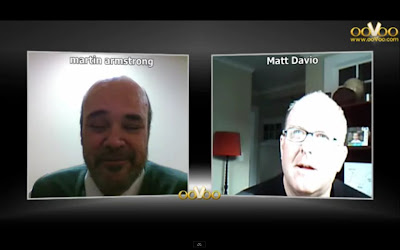