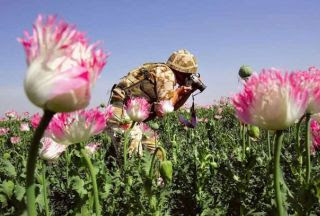 It was during the 1980’s US/Saudi-financed mujahadeen offensive on the Afghan people that Dubai – one of the emirates comprising the United Arab Emirates (UAE) – became a duty-free port and drug money laundry, serving much the same role as Hong Kong had for the Illuminati banksters during the Vietnam War.
它是在1980的美國/沙特資助對阿富汗人民的聖戰士攻勢，迪拜 - 酋長國之一組成阿拉伯聯合酋長國（阿聯酋） - 成為一免稅港和毒錢洗衣店，當上有如香港在越南戰爭期間為光明會的搶匪銀行家服務的相同角色。
Where Hong Kong had financed CIA opium for arms swaps in the Golden Triangle, Dubai served the CIA smack for weapons trade in the Golden Crescent – an area which comprises parts of Iran, Afghanistan and Pakistan.
香港在金三角已資助中情局鴉片交易武器，杜拜在金新月 - 一個地區由伊朗、阿富汗和巴基斯坦的部分組成 - 則擔任中情局少許作武器貿易。
Golden Crescent opium production eclipsed Golden Triangle production just as the CIA was springing into action in Afghanistan. While international banks in Dubai laundered the proceeds, Sharjah – another UAE emirate – housed a duty-free airport specializing in covert weapons shipments. [1]
金新月鴉片生產使金三角生產黯然失色，就像中情局在阿富汗突然作出的行動。而在杜拜的國際銀行清洗收益，沙迦 - 另一個阿聯酋的酋長國 - 蓋了一個免稅機場專門從事掩蓋的武器裝運。 [1]
Gold is the currency of drug and weapons traffickers and Dubai is the favorite hub in the global bullion trade. The British Bank of the Middle East dominates the Dubai gold trade.
黃金是毒品和武器販運者的貨幣，和杜拜是在全球黃金貿易的喜愛樞紐，英國中東銀行佔主導杜拜的黃金貿易。
It is 100% owned by Hong Kong Shanghai Bank (HSBC), which also monopolizes the Hong Kong gold trade along with Kleinwort Benson, which has close relations with Rio Tinto, a company founded on Matheson family opium proceeds. Matheson’s heirs are the Keswick and Swire families which dominate the board of directors at HSBC, Jardine Matheson, P&O Nedlloyd and Cathay Pacific Airlines. [2]
它是100%由香港上海匯豐銀行（HSBC）擁有，它還與佳華賓遜壟斷了香港的黃金交易，後者與Rio Tinto具有密切的關係，它是一家公司建立在馬菲遜家族的鴉片收益。馬菲遜的繼承人是凱瑟克及太古家族，他們主導匯豐銀行、怡和、P＆O 鐵行渣華和國泰航空公司的董事會。 [2]
Kleinwort’s Sharps Pixley subsidiary is one of five firms that gather daily at N. M. Rothschild & Sons in London to unilaterally “fix” the price of gold. Another is Mocatta Metals which is majority-owned by Standard Chartered – the bank Cecil Rhodes founded – where P&O’s Lord Inchcape sits on the board. P&O is the world’s largest port operator. Mocatta is a favorite conduit for Israeli Mossad financing.
佳華的子公司Sharps Pixley是五家公司之一，每天聚集在倫敦的N.M.羅富齊父子，來單方面“定盤”黃金價格。另一間是Mocatta金屬，多數股權由渣打銀行擁有 - 由塞西爾·羅德斯成立的銀行 - 其中P＆O的英之傑爵士坐在董事局，P＆O是世界上最大的港口運營商。Mocatta是以色列摩薩德融資的一個最喜歡管道。
Midland Bank subsidiary Samuel Montagu is a third London gold “fixer”. Midland was bought by HSBC in 1999 and is partially owned by the Kuwaiti al-Sabah clan. The other two gold fixers are Johnson Matthey and N. M. Rothschild, both of which have interlocking boards with Anglo-American and HSBC. [3]
美聯銀行的附屬公司森姆爾·蒙塔古是第三間倫敦黃金的“定盤商”。美聯銀行於1999年由匯豐購入和部分地由科威特的薩巴赫家族擁有。其它兩個黃金定盤商是Johnson Matthey和N.M.羅富齊，兩者都有英美公司與匯豐銀行的互鎖董事局。 [3]
Anglo-American – controlled by South Africa’s Oppenheimer family – owns both Engelhardt, which enjoys a near monopoly in refining the world’s gold, and DeBeers, which monopolizes the global diamond trade.
英美公司 - 由南非的奧本海默家族控制 - 擁有享有近乎壟斷世界黃金提煉的恩格爾哈特，及壟斷全球鑽石貿易的戴比爾斯兩者。
It was the mysterious Count of Saint-Germain who first claimed to possess the esoteric knowledge necessary for the transmutation of metals like gold and for removing flaws from diamonds.
它是神秘的聖日耳曼伯爵，它首先聲稱擁有需要的深奧知識，來作如黃金的金屬嬗變和去除鑽石的缺陷。
The Count stayed for a time with William IX of Hesse, whose financial adviser was Mayer Rothschild. The Count may have imparted his secret wisdom upon young Mayer and his House of Hesse employer, who in partnership came to control the Cabalistic Frankfurt Freemason Lodge which housed the German Illuminati. [4]
伯爵與威廉黑森州九世逗留一段時間，他的財務顧問是梅耶羅富齊。伯爵可能已傳授他的秘密智慧在年輕的梅耶和他的黑森州雇主的房子上，在夥伴關係中他來到控制神秘的法蘭克福共濟會分部，那設有德國的光明會。 [4]
Diamonds are important in the laundering of drug money since they are small and easy to transport, yet hold great value. Sir Harry Oppenheimer’s De Beers controls 85% of the global wholesale diamond market. De Beers is a subsidiary of Anglo-American where Sir Harry sits on the board.
鑽石在清洗毒錢是重要的，因為它們體積小及易於運輸，卻具有很大的價值。哈里·奧本海默爵士的德比爾斯控制了全球性批發鑽石市場的85％。德比爾斯是英美公司的子公司，其中哈里爵士坐在董事會。
The current De Beers chairman is Nicky Oppenheimer. De Beers’ most valuable diamond mines are in southern Africa. One called Jwaneng, at the edge of the Kalahari Desert in Botswana, may be the most valuable property on earth.
目前的戴比爾斯公司主席是尼基·奧本海默，德比爾斯的最寶貴鑽石礦都在非洲南部。一個叫Jwaneng，在博茨瓦納的喀拉哈里沙漠的邊緣，可能是地球上最寶貴的財產。
This vein of kimberlite, which produces diamonds, was only discovered in 1973. De Beers also mines diamonds from off-shore platforms off the coast of Namibia.

The world’s largest store of diamonds sits under De Beers London headquarters. The company sells rough diamonds ten times a year in London to 125 hand-picked customers at a take-it-or-leave-it set price. De Beers was indicted in 1994 for price-fixing by the US Justice Department and to this day company officials do not set foot on US soil for fear they may be nabbed by US authorities. [5]

Diamond cutting was until recently done in only two places in the world- Antwerp, Belgium and Ashqelon, Israel. In Antwerp the cutting was financed by Banque Bruxelles-Lambert, which is controlled by the Lambert family – cousins to the Rothschilds and owners of the scandal-ridden Drexel Burnham Lambert.

In Israel the cutting was financed by Bank Leumi, Israel’s biggest finance house which is controlled by the British Barclays Bank. Sir Harry Oppenheimer also sits on the Barclay’s board. [6]

Recently Gujarat, India has become the location of choice for 90% of global diamond cutting due to the cheap labor it affords. Bangkok, Tel Aviv and New York handle the rest. Eighty percent of diamond trading still occurs in Antwerp.

De Beers, like gold-fixer Standard Chartered, was founded by Cecil Rhodes in South Africa during the 1880’s. Rhodes’ last will and testament created the Royal Institute for International Affairs which spawned the Council on Foreign Relations. Rhodes Scholars like Bill Clinton are funded by the Rhodes Trust.

The principal trustee for the Rhodes estate is Lord Alfred Milner, who in 1899 provoked the Boer War through which Britain and Rhodes gained control over South Africa’s diamond and gold mines. There, black South Africans toil in one of the world’s most dangerous jobs and receive almost nothing for enriching the Oppenheimers and their cronies.

Rhodes was a leader in European Freemasonry, where he mingled with the likes of the Rothschilds, King George IV, King William IV, Lord Randolph Churchill (Winston’s father), the Marquis of Salisbury, Arthur Conan Doyle, Rudyard Kipling and Oscar Wilde.

The group was preoccupied with the notion of an Aryan super-race, a notion shared by Adolf Hitler and the ruling paradigm for the South African apartheid regime. Their “secret knowledge” of human creation, which defies both creationist and evolutionary theories, is bound up in the tale of the Anunnaki, who according to recently uncovered Sumerian clay tablets arrived around 6000 BC in Sumeria from planet Nubira.

A growing number of researchers led by Zechariah Sitchin say the Annunaki bred human slaves known in the Hebrew bible as Adamu and in English as Earthlings to mine gold necessary to patch up a hole in Nubira’s ozone layer which was caused by a collision with another planet.

One Anunnaki leader was named Nazi. The alien gods who created “Adam” called their Mesopotamian colony E.DIN. They traveled the world in search of gold, which NASA scientists agree would be the best patch for our own ozone problem. Scientists have discovered mining operations going back as far as 100,000 BC in Africa, South and Central America. [7]

The Adamus who left Eden became gold mining slaves and their worldwide deployment may explain the many holes in evolutionary and anthropological theories of the day. It may also explain phenomena such as the Nazca Lines in Peru and the Great Pyramids of Egypt.

Adam and his descendants became slaves to these Lords. The biblical Hebrew term avod which is commonly translated “worship” actually means “work”. Adam and the biblical characters were not worshiping God, they were working for him as slaves. And “God” may connote the Anunnaki invaders.

The Sumerian tablets provide an intriguing explanation as to why man settled into agriculture in Mesopotamia from the much easier and more sustainable practice of hunting and gathering.

The tablets state simply that the Annunaki gods made them do it. Cities grew and the Annunaki placed one of its god/human hybrids in charge of each new urban center. These rulers became Kings, their dynastic right to rule based on bloodlines to the Anunnaki.

The first such king was Cush, who was Noah’s grandson and the father of Nimrod. Some researchers believe Yahweh was actually Annunaki earth mission commander Enli, who was a brutal tyrant.

Abraham, who all major religions claim as their patriarch, may have also been an Anunnaki hybrid. The secret knowledge Abraham purveyed serves as the basis for all modern secret societies, from Freemasonry to Cabala to the Muslim Brotherhood.

Whether true or not, what is important is that the Illuminati elite believe that these special bloodlines give them the God-given right to enslave all Earthlings.

In November 1997, when Baron Edmond Rothschild died in Geneva, he left in his trust substantial holdings in De Beers. [8]

According to former British Intelligence officer John Coleman, author of The Committee of 300, “Rhodes was principal agent for the Rothschilds…who dispossessed the South African Boers of their birthright, the gold and diamonds that lay beneath their soil.”

Coleman fails to mention that the Boers were themselves invaders and that black South Africans held the true birthright to this vast wealth. Still, Coleman’s statement regarding the Rhodes/Rothschild relationship appears on the mark.

In 1888 Cecil Rhodes wrote his third will and left everything to Lord Rothschild. Rhodes, Milner and Rothschild founded the Business Roundtable in London in early 1900 which charted a course for expansion of the British Empire and for Crown control over the global economy that exists to this day.