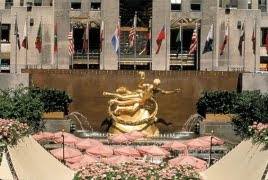 PanARMENIAN.Net - Two of the most glamorous names in global finance are linking up, with the Rothschild banking dynasty agreeing to buy a stake in the Rockefeller group's wealth and asset management business to get a long-sought foothold in the United States, Reuters reported.
PanARMENIAN.Net - 全球金融中最有魅力的兩個名字正在連繫起來，羅富齊的銀行王朝同意購買洛克菲勒集團的財富和資產管理業務的股份，以得到一處長期在美國追求的立足點，據路透社報導。
Rothschild's London-listed RIT Capital Partners (RCP.L) said on Wednesday, May 30 it was buying the 37 percent stake from French group Societe Generale's (SOGN.PA) private banking arm for an undisclosed sum.
羅富齊在倫敦上市的RIT資本合作夥伴（RCP.L）5月30日（星期三）說，它正從法國集團興業（SOGN.PA）的私人銀行部門以不詳金額購買37％股份，。
The transatlantic union brings together David Rockefeller, 96, and Jacob Rothschild, 76 - two family patriarchs whose personal relationship spans five decades.
該跨大西洋聯盟匯集了96歲的大衛洛克菲勒和76歲的雅各羅富齊 - 兩大家族族長他們的個人關係跨越五十年。
Rockefeller & Co traces its origins back to 1882 when it was founded as one of the world's first family offices by John D. Rockefeller to manage his personal wealth.

Since then it has developed into a wealth advisory group administering assets of $34 billion. The Rothschild banking dynasty began when Mayer Amschel Rothschild started a business in Frankfurt in the late 18th century.

The family has worked on some epochal deals during its history, such as helping finance Britain's war against Napoleon in the 19th century and raising funds for a loan allowing the British government to buy the Suez canal.

RIT and another of the family's companies, Edmond de Rothschild Group, said earlier this year they would form a new joint venture to boost their fund management and investment operations.

SocGen, which has held the stake in the Rockefeller wealth and asset management operation since 2008, appointed a new head of private banking in March, replacing Daniel Truchi with Jean-Francois Mazaud as it moved to overhaul the business.

Banks across the world are shedding non-core assets to reduce their risks and strengthen their capital positions to meet tough regulations aimed at preventing a repeat of the 2008 financial crisis.

The deal is expected to close by the end of September.
交易預計在九月底完成。
http://panarmenian.net/eng/news/109730/
張貼者： Autumnson 於 下午9:15