土耳其和卡塔爾: 一個在沙特寶劍之下的聯盟
Turkey and Qatar: An Alliance Under the Saudi Sword

The new U.S. leverage that emerged after the Saudi embarrassment is the same leverage that the U.S. can now use to broker an entente between Saudi Arabia and Qatar.

That there may be a Saudi-Qatari rapprochement might be bad news for Erdoğan. A future Saudi-Qatari deal would force Turkey militarily out of the Gulf and force Erdoğan entirely to recalibrate his quest for Turkish leadership in the Sunni ummah (global community).

Qatar's distance from Erdoğan regarding the Khashoggi murder signals a Qatari-Saudi entente. Qatar may well be breaking away from its alliance with Turkey.

This will give the Saudis an upper hand in their rivalry with Erdoğan in Sunni leadership of the ummah. If Erdoğan loses Qatar to Saudi Arabia, he will be paying geostrategic price as well as an economic one. 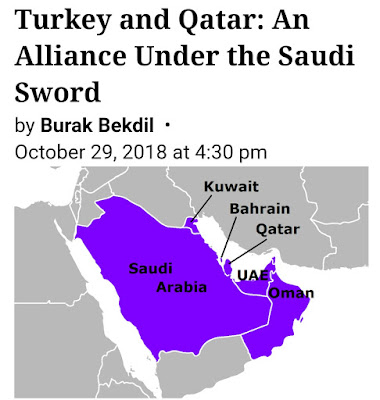