The birth of Jesus, which is celebrated on Christmas Day, occurred without his having a biological father. State owned SVT, however, has solved the mystery of the virgin birth.
Jesus or Virgin Mary may have been transsexual, they reason. Was Jesus born as a girl? SVT asks and believesthey have found support for that theory in science.
SVT’s claim is not the Biblical account of the virgin birth, but that Mary became pregnant with Joseph or someone else. But the highly biased, left-wing channel has launched a more gender-modern theory:
A phenomenon known as parthenogenesis. It occurs among algae, fish and frogs and means that an embryo develops without fertilisation. The offspring then becomes genetically identical to the mother – which means that it must have the same gender.
As both the name and pronoun of Jesus are described as male in the scriptures, it can also be concluded that Jesus was a transvestite / transsexual according to the channel.
SVT also theorises about another possibility – that Mary was a man who lived as a woman and with parthenogenesis gave birth to Jesus, who was thus also a man.
How the man Mary got her female genitals and her uterus to breed, carry and give birth to the little boy child Jesus or his brothers, SVT does not explain.
A corresponding analysis of Muhammad’s relationship with 6-year-old Aisha during Eid al-adha or Ramadan is not very probable. 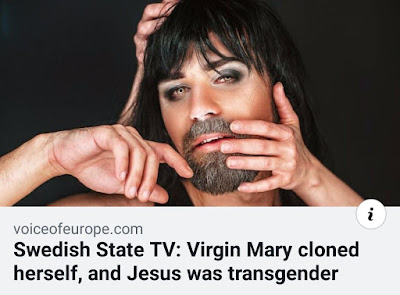