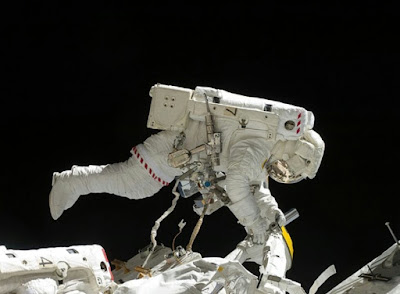 “It’s up to the investigative organs to judge when that hole was made.”


That would sound like a standard police statement if made by a department spokesperson when discussing an orifice made by a bullet in a wall or a corpse, but it takes on an eerie and mysterious aura when referring to a mysterious hole in the International Space Station that was found months ago but whose cause has yet to be identified … at least officially. Cosmonaut Sergei Valeriyevich Prokopyev, who returned to Earth this week with fellow crew members Serena Aunon-Chancellor of NASA and Alexander Gerst of the European Space Agency, said in an interview that tiny opening he eyeballed himself from both inside and outside the docked Soyuz capsule they returned in – minus the part where the hole was – appeared to have been drilled from the inside. He’s the best eyewitness yet he can’t answer the question … who was behind this inside job?

“You shouldn’t think so badly of our crew.”


That’s what Prokopyev said this week and months ago when the hole was first discovered and Roscosmos chief Dmitry Rogozin speculated that it could have been drilled by a homesick crew member looking to create a reason for an early return. Rogozin backed off on that but kept open the possibility that the hole could have been made during the Soyuz manufacturing process as an accident which was hastily plugged to pass inspection or as an act of deliberate sabotage. Prokopyev’s eyewitness assessment that it was made in space shakes things up considerably.

Unfortunately, the ‘CSI: Space’ team is missing a key component that would help in their investigation … the crime scene itself. NASA, Roscosmos and the crew were not concerned for their safety on the ISS nor on their trip home because the tiny hole was patchable and in a part of the Soyuz capsule that would be jettisoned before they reached the re-entry stage where it could put them in real danger. All that the “investigative organs” have to work with are the statements of the crew, the photos and videos taken by Prokopyev both from inside and on his spacewalk outside, and the mysterious yellow gunk that was scraped off from the outer hull. Sabotage on the ground might be the explanation if the hole were drilled from the outside, but Prokopyev’s statement puts the cause back inside the station.

“Russian cosmonauts Sergey Prokopyev and Oleg Artemyev will be questioned by the investigators as witnesses in the probe into a microfracture which was found on the body of the Soyuz MS-09 spacecraft, while it was docked to the International Space Station (ISS).”


Sputnik News reports that Prokopyev and cosmonaut Oleg Artemyev, who was on the ISS when the hole was discovered and returned to Earth in October, will be questioned by Russian investigators as they attempt to find the cause of the hole and why Prokopyev believes it was an inside job yet defends his crew. This raises more unanswered questions. Is he just referring to his fellow cosmonauts? There is no report of there being any NASA representatives on the investigative team. Can the results be trusted without NASA participation? We haven’t heard anything from the NASA or ESA crew members. Why not?

While ‘CSI: Space’ might be an entertaining TV show, the real thing is sadly still showing signs that this could be the first real crime in space. TV criminal mysteries are resolved in an hour. Will this one ever be? 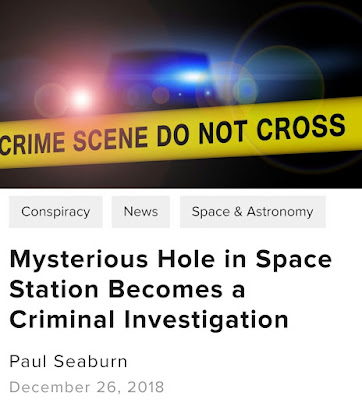