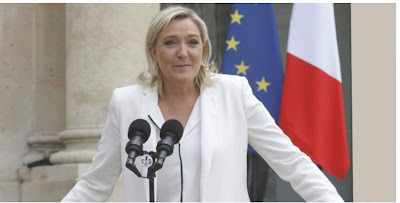 National populist leader Marine Le Pen along with her Rassemblement National (National Rally) has prevailed over France’s sitting president Emmanuel Macron in the European Parliament elections and wants him to resign.
Ms. Le Pen’s party had won  23,6 percent of the vote, edging out Macron’s La Republique En Marche (LREM) who garnered about 22,4 percent of the vote, according to French newspaper Le Figaro.
Voter turnout across the continent was estimated at 51 percent, the highest in 20 years, indicating that over 200 million citizens across the 28-nation bloc showed up.
During her victory speech, the National Rally leader said, “The French have placed the National Rally at the top of the European elections. I see the people’s victory, who with pride and dignity have retaken power this evening.
Le Pen, who lost out to Macron in the 2017 national elections, went on to call for the head of state to dissolve the French Parliament “as a minimum”, saying “it is up to the president of the Republic to draw conclusions, he who put his presidential credit on the line in this vote in making it a referendum on his policies and even his personality.”
Earlier in the month, during the run-up to the election, Le Pen had referred to the European Parliament elections as a referendum on the presidency of Macron, calling on him to step down from office in the case that his party did not win.
“So it becomes a referendum for or against Emmanuel Macron, this European election. I accept that, but in these conditions, he must do as General De Gaulle: if he loses this election, then he will have to leave,” she said at the beginning of this month.
Ms. Le Pens sentiments were echoed by 23-year-old Jordan Bardella, the lead candidate for the National Rally.
“The president will not be able to govern against the interests of the French during the second half of his quinquennium, which is why we are asking him to dissolve the National Assembly,” Bardella declared.
“The French people have clearly punished the president tonight, and taught him a lesson in humility,” he added.
Reacting to the exit poll results, French Prime Minister Edouard Philippe had this to say: “The far right is consolidating its positions, this message is strong and we have received it,” adding, “For my part, I welcome these results with humility. When we finish second, we cannot say we won."
https://voiceofeurope.com/2019/05/le-pen-calls-on-macron-to-resign-after-victory-in-european-election/