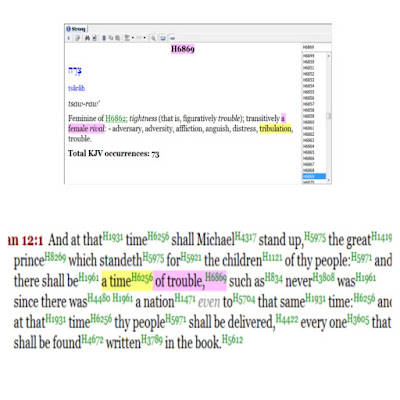 麥當娜宣掦"不是每個人會到達未來,不是每個這𥚃的人會過渡。" - 美國會被摧毁 - 世界性禁制
Madonna Publicizes, “Not Everyone is Coming to the Future. Not Everyone That’s Here is Gonna Last.” – America to Be Destroyed – Banned Worldwide (Video) 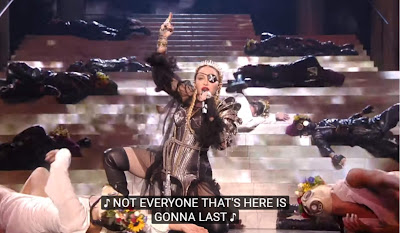 Madonna’s performance at Eurovision literally displays the imminent destruction of America amidst lyrical announcements that include “Not everyone is coming to the future.  Not everyone that’s here is gonna last.”
This is a satanic ritual done right in front of us that announces everyone is about to die and Satan’s New World Order is coming!  I can’t believe they are displaying this to the general public, you cannot even think this stuff up!
Initially banned worldwide, here is the reconstructed presentation that exposes the absolute truth of Madonna’s performance!  Make backups of this information and share it with friends right away!
FEATURED VIDEO: Banned Worldwide!!Why?? Because they telegraphed their Plans to KILL US 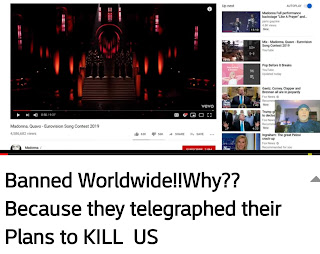 Description: This was Banned worldwide even though videos with the SAME Content are still UP and AVAILABLE… This was Banned Because it SEES THROUGH the Telegraphed Destruction of the USA And OPENLY Proclaims Isaiah 14 where Lucifer says ” I will Arise Above the Stars of the LORD GOD ( EL )… I adjusted the Video content and Hopefully this will Work…I AM RINGING the BELL and SOUNDING the ALARM!!!! They have Publicly Declared THEIR PLANS
Madonna, Quavo – Eurovision Song Contest 2019 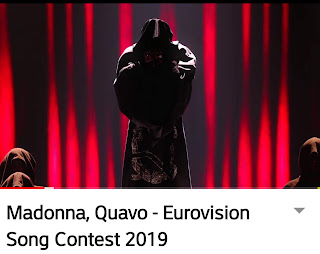 During the whole performance, Madonna has one eye covered representing Satan’s all-seeing eye throughout humanity.
Modanna rises from beneath with an ‘X‘ on her dress and an ‘X‘ covering one eye.  ‘XX’ is the female chromosome set.

Daniel 12 speaks of the ‘time of trouble’ which is the time of the ‘female rival‘ that will bring about the great tribulation.

Madonna starts the performance as the female rival, represented by the ‘XX’ chromosome set, rising out of the bottomless pit!

2019 in the Strong’s concordance of the Bible means: to call out.

Wow!  20 and 19 proselytes begin to call out ‘Madonna’ and 2019 in the Bible means to call out!
Individually, 20 means exultation, exuberant joy;  19 means slaughter. The proselytes in this satanic ritual are being used to precisely describe Satans’s exultation out from the bottomless pit and hisexuberant joy to slaughter those on earth when he is called out!
When walking down the stairs she flashes an upside-down cross on one side of her dress and then alternates to the other side exposing a serpent on her dress!

This displays the paradigm that is present within the human genome: you have one eye that is asleep to Christ (portrayed by the upside-down cross), and the other eye is open to Satan (portrayed by the serpent) – your vision is double.  When you are converted by the Holy Spirit of Christ, He corrects your double vision and provides the light to see and discern singularly the absolute truth.
“The light of the body is the eye: if therefore thine eye be single, thy whole body shall be full of light.
But if thine eye be evil, thy whole body shall be full of darkness. If therefore the light that is in thee be darkness, how great is that darkness!”(Matthew 6:22-23 KJV Holy Bible)
Madonna is portraying the evil eye full of darkness.
As she turns a female’s head upside down, Madonna announces: “They are so naive.  They think we are not aware of their crimes.”

The crime was in heaven when Lucifer tricked a bunch of God’s angels to be ‘as gods’ and become co-creators with him wherein they were born upside down into flesh host bodies and their nature became completely inverted against the spirit of the Lord God.
The lyrics of her song even rubs it in our face that we are angels that fell out of the sky because the serpent (Satan aka. Lucifer) tricked us when we listened to his voice bywhispering his magic spell that led everyone astray from heaven to the earth!
Like A Prayer by Madonna – Lyrics:

The serpent (Satan aka. Lucifer) is known properly as the nâchâsh in the Bible which comes from nâchashmeaning: to hiss, that is, whisper a (magic) spell.

Madonna sings “I hear you call my name.. I hear your voice, it’s like an angel sighing I have no choice, I hear your voice.. Feels like flying I close my eyes, oh God I think I’m falling…..Out of the sky, I close my eyes Heaven help me… Like a child you whisper softly to me You’re in control just like a child…”  It’s very clear to understand that she is referring to us angels falling from heaven into human bodies in these lyrics.
Then in the background, they display two identical heads representing thetwin system that developed from the Garden of Eden tree of knowledge of good and evil.

Madonna states “The storm isn’t in the air; it’s inside of us.”  That’s exactly correct!  Cain and Abel wereheteropaternal superfecundationtwins (twins with two different fathers) and Cain was evil and Abel was good.  There is a Cain and anAbel within each human on earth – that is the twin system and the struggle of good and evil within all of us.
The next scene is very significant.  There are brides in white dresses who are all wearing gas maskswhich oddly resemble the look of a sheep’s head.

Madonna asks, “Can’t you hear outside of your supreme hoodie, the wind that’s beginning to howl?”  In the Bible, the word spiritalso delineates the wind.
Madonna then spins around and blows her spirit upon everyone and the stage turns to fire as they all fall down and die, signifying a newspirit of destruction has taken over!

The entire stage turns into an apocalyptic fiery wasteland!

There are 23 and 23 stars made by lights displayed on both sides of the stage as in the 23 and 23 chromosomes that create a human body.

The Bible refers to princes as starsand we are all princes whose spirit fell from heaven into the human host body system.
The song lyrics even rub it right in our faces again, stating ‘It’s the future where we come from, bein’ stars’!
Future by Madonna – Lyrics:

Then Madonna (who is representing Satan who was Lucifer before he fell from heaven) sings ‘But you know that I’ma rise above it all,yeah’ which is exactly what Lucifer said!
Read Isaiah 14:

Lucifer said in his heart ‘I will ascend (rise) into heaven, I will exalt my throne above the stars (princes) of God’, the same thing Madonna is singing while she ascends up the stairs above a stage lit up with a sky of stars!

At the 6:01 mark of the video Madonna begins singing “Not everyone is coming to the future.  Not everyone that’s here is gonna last.”

Precisely at the 6:16 mark of the video the stage erupts into a water birthing event!  Everyone is laying down dead with blood on the stairs and the Statue of Liberty is prominently displayed with her arm broken off!

616 in the Bible is the Greek word ἀποκυέω apokueō which means: to give birth to.

Wow!  At the exact moment that the stage displays a water event birthing, the number 616 of the timestamp in the video literally means ‘to give birth to’ in the Bible!
What’s interesting too is they display a split-screen.  You have the Statue of Liberty on both sides showing us the United States of America is a country divided and is slated for absolute destruction!
This performance is displaying the end of the twin system that governs the human host body and the takeover of only the Antichrist spirit as the sole governor within the temple of the human host body.

In this scene, there are 9 people in black and 5 people in white dresses rolling dead down the bloody stairs at the birth of Satan’s New World Order.

5 means Abba, father.
We are all spiritual beings that are a lost thing from Abba because we fell out of heaven into the human host body system.
This scene depicts the destruction of the lost things that have not woken up to Christ Jesus (Our HeavenlyFather) and Satan is taking the souls of those who die asleep and separated from Christ as apayment and consuming their spiritual energy in hell to develop his new race of locust beings that are going to birth out of the bottomless pit!
The numerical definitions in the Bible explicitly define the same exact thing that Madonna’s song and stage display!  Wow!  How is that even possible?!

Now they all begin to sing again and start taking their masks off.

The performers all interlock there arms behind their backs making an infinity symbol and at the center of the stage, there is a male with the flag of Israel on his back joined witha female with the flag of Jordan on her back.   (To understand why these flags are united here, please see the video presentation at the beginning of the article).

Then the stage performers all walk to the very top of the stairs, turn around and fall dead off the top backwards while singing “Not everyone is coming to the future. Not everyone that’s here is gonna last.” – signifying that they are all being sacrificed!

When everyone starts falling off the stage dead, they project this roadway of New York City in the background.  NYC is the flashpointas shown on the $10 and $100 bill depicting a nuclear tsunami that engulphs the city, finalizing Satan’s New World Order and kickstarting nuclear Armageddon!

They are communicating that the United States of America is the sacrifice for Satan’s New World Order!!!

In the final scene, Madonna and Quavo are the last two at the top of the stairs and an upside down cross of a church is projected beneath them resembling the upside down church, that has not been turned upward to Christ, is headed for destruction.

The satanic ritual ends when Madonna whispers the words “WAKE UP” (mocking everyone who is asleep to the real agenda going on here) and then falls backwards with Quavo off the stage as a sacrifice to the New World Order!