If we truly want to gain a deeper understanding of the controls over the population of this planet we must do the research and discover the Jesuit Order. This is the apex of evil on this planet and it started literally thousands of years ago. The Jesuits have incorporated this world and have gone by many names like the Knights of Malta, the Templars of old and the Phoenicians before that. They can even be traced back to the Nephilim of the Bible and in the Sumerian tablets as the Igigi from Annunaki fame. The Epic of Gilgamesh and the Lost Book of Enki are some good studies to understand that revelation. They have infiltrated or created, every secret society and every power structure on Earth.

The Jesuits have thousands of years of knowledge about the human condition. They know humanity better than humanity knows its self, this is obviously clear. To scoff or believe otherwise is the true nature of the problem we all face on Earth today. Because that is exactly what they want from humanity. They want you to believe. Because what you believe is what they will use against you to manipulate your behavior. One must do the research and come to a deeper understanding, not a belief. What one believes in, they will fight to the death to protect. It’s very hard to break from what one believes. The Jesuits understand this and they use it against humanity. Along with electromagnetism and low frequencies, they message the mind of humanity and direct its path.

The Jesuits have managed to delete most truth from the history books and re-write their own versions to keep the real truths hidden from the population of this planet. For example many in America (believe) that America won the war against the British known as the War of 1812. Nothing could be further from the truth. Ask yourself a question. How can a handful of Americans beat the British Empire? It would have been humanly impossible. In reality that battle bankrupted the Americans and they were forced into a deal with the British Empire to barrow money to continue as a colony of Brittan and incorporate under the umbrella of the Vatican Rule. Do the research, because in this day of the internet and information, ignorance is absolutely no excuse.

You see, history is false and that’s a fact. Rome never fell, America lost the War of 1812, the Nazi’s of World War 2, were secretly adopted into the corporation of the United States, and your vote does not count. Corporations do not vote on Presidents or any officer, for that matter. They are appointed. Buy who? By the Knights of Malta. Voting is a scam to make you think you have a say. To make you think you have control, that you are free. You are not free. You in fact, have volunteered to be a slave to U.S. Inc.

The CIA, the FBI and all the others are run and ruled by the Jesuits. The CIA can be traced in many accounts to Mind Control. Search your browser for (MK Ultra Mind Control) for further understanding.

What can be done about this? Now this is where the rubber hits the road. First and foremost we have to gain a deeper understanding about the Jesuits and how they operate. Because deeper understanding allows the flexibility for adjustments. We don’t protect it like a belief. We use it as a way to gain true knowledge, just like the Jesuits do. We use their information against them. We learn the history of the Jesuits and read their Oath. That alone should open your eyes to truth. We must understand the vehicles they use for control. The Phoenicians invented money for example. One of the very first control measures placed on this planet. They came here originally to mine the Gold. So naturally it became what was considered of value for trade. Thus it eventually became what we call money. Only in today’s world they replaced it with paper through the power of the Jesuit run Federal Reserve and call it Federal Reserve Notes. This is fiat currency that only has a perceived value. It’s not money at all, as it has no value backing it whatsoever. Again one must do the research on this subject to gain a deeper understanding.

The Jesuits invent religion as another form of control over the people of this planet. Not just the Roman Catholic Church, they in fact had their hands in the start of every religion on this planet. This was an evil deceptive way to divide and conquer the humans of Earth. Just sit and think of the genius of that plan. It has kept Earthlings in a constant struggle against each other for thousands of years and there appears to be no end to it. It’s also how they keep the masses in a state of fear. Fear allows for maximum penetration into the minds of man. For maximum control over humanity.

The resistance to believe these facts is great. Most of humanity is so wrapped up in making money as a way to buy freedom and on their knees worshiping some kind of god, that they cannot grasp the very truth of these facts. Yet, if you will do the research you will discover and understand, this is exactly what’s going on. It’s been the plan for humanity from the start. You were created as slaves and remain that way as of today unless you dig in and change your mindset. Until you gain a deeper understanding and let go of your false belief systems of control, you will never be free. Once that is accomplished to even a small degree, then and only then will you have a chance and true freedom. True freedom is love. Do the research that is required to gain a deeper understanding. Good luck and take care.

From The Jesuits Oath

“I furthermore promise and declare that I will, when opportunity present, make and wage relentless war, secretly or openly, against all heretics, Protestants and Liberals, as I am directed to do, to extirpate and exterminate them from the face of the whole earth; and that I will spare neither age, sex or condition; and that I will hang, waste, boil, flay, strangle and bury alive these infamous heretics, rip up the stomachs and wombs of their women and crush their infants’ heads against the walls, in order to annihilate forever their execrable race. That when the same cannot be done openly, I will secretly use the poisoned cup, the strangulating cord, the steel of the poniard or the leaden bullet, regardless of the honor, rank, dignity, or authority of the person or persons, whatever may be their condition in life, either public or private, as I at any time may be directed so to do by any agent of the Pope or Superior of the Brotherhood of the Holy Faith, of the Society of Jesus.”e Human Psyche. 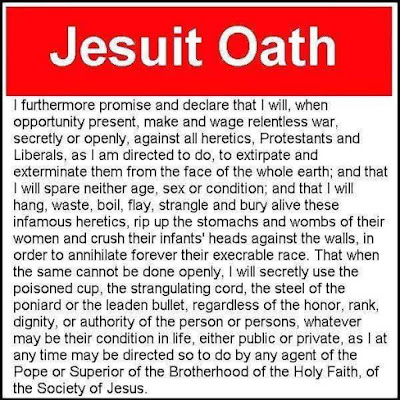