Fall of empire? German businesses find China a more trustworthy partner than US or Britain 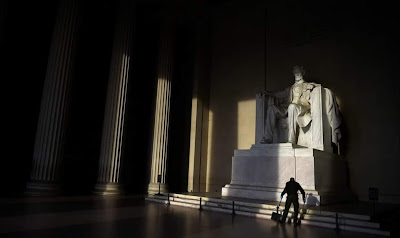 A cleaner in front of the Lincoln Memorial in Washington, D.C. © Reuters / Clodagh Kilcoyne


China has managed to outperform the US and the UK in a German ranking of the world’s most reliable trade partners, compiled from the latest survey of 2,000 German companies by Frankfurt-based Commerzbank.
Topped by only Germany itself and France, China landed in the third spot in the broad assessment, which focusses on political and economic conditions affecting international trade. The US, ranked fourth, is reportedly far behind its bitter Asian rival in their ongoing trade dispute.
The results of the survey –released on Wednesday– shows that the US is followed by Italy, Russia, the UK, Brazil and Turkey when it comes to cross-border trade. The US trade credibility is reportedly being undermined by the stance adopted at the White House since Donald Trump became president. Most of the US trading partners consider its trading policies as manifestations of protectionism.


Nearly 70 percent of German corporations with a physical presence in the US, and 64 percent of exporters to the country, expressed deep concerns that Washington’s foreign and trade policies would have a negative impact on business.
Since taking office in 2017, President Trump, whose main election promise was to make America great again, has broken a wide range of international trade deals the US was involved in. These included the Trans-Pacific Partnership (TPP), the Transatlantic Trade and Investment Partnership (TTIP) and the longstanding trilateral North American Free Trade Agreement (NAFTA).
Moreover, the Trump administration introduced steel and aluminum tariffs against imports from a vast number of countries, including Canada, Mexico, the European Union, China, Russia, India, Japan and Turkey.
Apart from that, the White House launched a fierce trade war against China, accusing Beijing of unfair trading practices and intellectual property theft.


When it comes to Britain, the key factor behind its declining trade credibility is the country's potential exit from the European Union. Brexit uncertainty has triggered fears among the country’s international partners over the potential impact on their businesses and Germany is no exception. More than 80 percent of the surveyed companies with a branch or office location in the UK, and 60 percent of exporters to the country, fear that Brexit would hurt their interests.
Among 115 German companies thinking of relocating their production facilities overseas, 31 percent are reportedly eyeing China, compared to 11 percent considering a move to southeast Asian countries, and nine percent to the US.