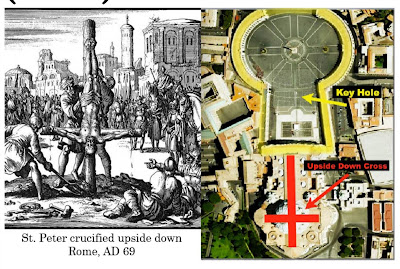 
(Matthew 16: 17-19 KJV Holy Bible)
THE VATICAN HAS BEEN HIDING THE KEYS OF THE KINGDOM OF HEAVEN!
FEATURED VIDEO: PRICELESS ABSOLUTELY PRICELESS 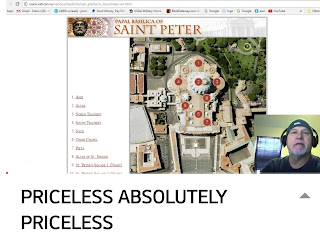 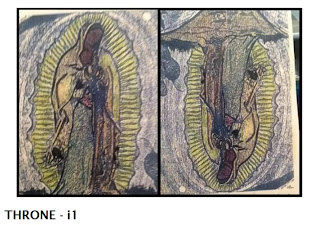 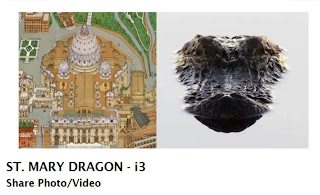 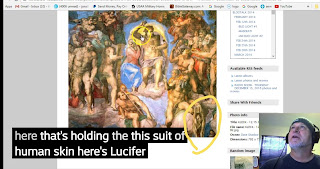 https://youtu.be/9XuLA2yGPzM
“From start to finish: the meaning of life, the meaning of the Bible, the proof that the actual meaning has been completely hidden from us .. who has hidden it? ..  how have they hidden it?  Now, it is no longer hidden.” – (Opening scene from PRICELESS ABSOLUTELY PRICELESS)
WHY WAS ST. PETER CRUCIFIED UPSIDE DOWN?

St. Peter revealed this mystery while being crucified upside down on a cross, as recorded in the Acts of Peter chapter XXXVIII:
XXXVIII. And when they had hanged him up after the manner he desired, he began again to say: Ye men unto whom it belongeth to hear, hearken to that which I shall declare unto you at this especial time as I hang here. Learn ye the mystery of all nature, and the beginning of all things, what it was. For the first man, whose race I bear in mine appearance (or, of the race of whom I bear the likeness), fell (was borne) head downwards, and showed forth a manner of birth such as was not heretofore: for it was dead, having no motion. He, then, being pulled down -who also cast his first state down upon the earth- established this whole disposition of all things, being hanged up an image of the creation (Gk. vocation) wherein he made the things of the right hand into left hand and the left hand into right hand, and changed about all the marks of their nature, so that he thought those things that were not fair to be fair, and those that were in truth evil, to be good. Concerning which the Lord saith in a mystery: Unless ye make the things of the right hand as those of the left, and those of the left as those of the right, and those that are above as those below, and those that are behind as those that are before, ye shall not have knowledge of the kingdom.(Acts of Peter XXXVIII)

We all are all spiritual beings, angels of God in heaven, who got birthed upside down onto the earth and locked inside inverted sinful bodies!  The only way out is to repent – turn 180 degrees back to the nature of where we came from – which occurs when we become spiritually reborn of Christ’s Holy Spirit!

The Largest Altar in the World – St. Peter’s Basilica – Vatican City
– DECRYPTED –
The Vatican is home to the largest altar in the world which has been discovered to contain all of the elements that explain this mystery of our spiritual origin and the formation of the human race!
THE FEMALE REPRODUCTIVE SYSTEM:

We can clearly identify each part of the altar matches the anatomy of the female reproductive system.  The pope mitre hats are ovaries and the throne stretches out as fallopian tubes.  We can directly overlay each part right on top of the altar itself:

The circular window picturing a dove in stained glass aligns perfectly as the opening of the vagina.  The dove and the light that enters through the window all represent our spiritual light energy encapsulated into the sperm that gets cast into the feminine system.
THE MALE REPRODUCTIVE SYSTEM:

The male penis is made by the throne of St. Peter (outlined in black).

We can directly align the male anatomy right on top of the altar itself – it’s quite obvious that the throne is the shape of a penis.
The female and male reproductive systems obviously fit seamlessly together and the intersection of these mechanisms are what formed the entire human population.  That being said, it is clear to see creationism as the narrative embedded in the largest altar of the most influential governing power in the world – the Vatican.
THE SEED / SPERM:

The top of the throne is a urethra (notice the vesica piscis) which is the opening where we see the seed and candles representing light energy.

The seed is representative of the sperm (which houses our spiritual light) and it is depicted as the crown of the altar.

This photo illustrates the ‘spark of life’ as light energy flashes during the precise moment the male sperm cell fertilizes the female egg.

This is how each and every single one of us fell from heaven as light beings (angels) into mortal human flesh.

We can see the seed is being injected into the female reproductive system.
ANGELS FALLING FROM HEAVEN / BIRTHED INTO THE FLESH:

“And the angels which kept not their first estate, but left their own habitation, he hath reserved ineverlasting chains under darkness unto the judgment of the great day.”(Jude 1:6 KJV Holy Bible)

The word everlasting is the Greek word G126 ἀΐ́διος aidios meaning: everduring (forward and backward) or forward only): – eternal, everlasting.
The word chains is the Greek word G1199 δεσμόν desmon meaning: a band, that is, ligament (of the body) or shackle (of a prisoner); figuratively an impediment or disability: – band, bond, chain, string.

Upon further inspection of theangels we can see that most of them have double faces (forward and backward) and are falling from heaven into the human reproductive system which begins the process of human life in the womb as ligaments of the body are developed and a new angel is held prisoner, shackled in the flesh!
You can see some of the forward and backward faces highlighted in pink:

The altar depicts angels falling from heaven into ligaments of the body which are our human flesh!  This altar aligns precisely with Jude 1:6 and proves that our flesh bodies are our shackles, our prisons!
Psalm 82 states we are all fallen angels.
“I have said, Ye are gods; and all of you are children of the most High. But ye shall die like men, and fall like one of the princes.” (Psalm 82:6-7 KJV Holy Bible)

The word ‘gods‘ is the Hebrew word H430  אֱלֹהִים  ‘ĕlôhı̂ym and is defined in the Strong’s Concordance as follows:
Plural of H433; gods in the ordinary sense; but specifically used (in the plural thus, especially with the article) of the supreme God; occasionally applied by way of deference to magistrates; and sometimes as a superlative: – angels, X exceeding, God (gods) (-dess, -ly), X (very) great, judges, X mighty.
“I have said, Ye are angels; and all of you are children of the most High.But ye shall die like men, and fall like one of the princes.” (Psalm 82:6-7 KJV Holy Bible)
Jesus even said it to the Jews in John 10:34 “Jesus answered them, Is it not written in your law, I said, Ye are gods?” (KJV Holy Bible)

THE DEAD SHEEP:
God’s children are referred to assheep all throughout the Bible.

We have a match!  If you cannot see that the altar itself is constructed to resemble a dead sheep, I am sorry but you are spiritually blind.
Jesus Christ warned us in John Chapter 10:
1 Verily, verily, I say unto you, He that entereth not by the door into the sheepfold, but climbeth up some other way, the same is a thief and a robber.
2 But he that entereth in by the door is the shepherd of thesheep.
3 To him the porter openeth; and the sheep hear his voice: and he calleth his own sheep by name, and leadeth them out.
4 And when he putteth forth his own sheep, he goeth before them, and the sheep follow him: for they know his voice.
5 And a stranger will they not follow, but will flee from him: for they know not the voice of strangers.
6 This parable spake Jesus unto them: but they understood not what things they were which he spake unto them.
7 Then said Jesus unto them again, Verily, verily, I say unto you, I am the door of the sheep.
8 All that ever came before me are thieves and robbers: but thesheep did not hear them.
9 I am the door: by me if any man enter in, he shall be saved, and shall go in and out, and find pasture.
10 The thief cometh not, but for to steal, and to kill, and to destroy: I am come that they might have life, and that they might have it more abundantly.
11 I am the good shepherd: the good shepherd giveth his life for the sheep.
12 But he that is an hireling, and not the shepherd, whose own the sheep are not, seeth the wolf coming, and leaveth the sheep, and fleeth: and the wolf catcheth them, and scattereth the sheep.
13 The hireling fleeth, because he is an hireling, and careth not for the sheep.
14 I am the good shepherd, and know my sheep, and am known of mine.
15 As the Father knoweth me, even so know I the Father: and I lay down my life for the sheep.
16 And other sheep I have, which are not of this fold: them also I must bring, and they shall hear my voice; and there shall be one fold, and one shepherd.
17 Therefore doth my Father love me, because I lay down my life, that I might take it again.
18 No man taketh it from me, but I lay it down of myself. I have power to lay it down, and I have power to take it again. This commandment have I received of my Father. (John 10: 1-18 KJV Holy Bible)

St. Peter’s Basilica of Vatican City is constructed into a gigantic serpent and the dead sheep is located inside its mouth!
THE SERPENT:

In the photo above, we can clearly identify all of the characteristics of a serpent – even a forked tongue!

The dragon, the serpent, and thedevil are all names of Satan and this scripture proves it:
“And the great dragon was cast out, that old serpent, called the Devil, and Satan, which deceiveth the whole world: he was cast out into the earth, and his angels were cast out with him.” (Revelation 12:9 KJV Holy Bible)

St. Peter’s Basilica depicts a giant keyhole covered in black cobblestone which clearly resembles the scales of a serpent.

Jesus said: “But woe unto you, scribes and Pharisees, hypocrites!for ye shut up the kingdom of heaven against men: for ye neither go in yourselves, neither suffer ye them that are entering to go in.”(Matthew 23:13 KJV Holy Bible)

The serpent scales cover and shut up the keyhole!

We are angels that got kicked out of heaven and our spirit was locked into serpent skin!
FLESH IS SERPENT SKIN:

“And the Lord God made to Adam and to his wife vestures of honour from the skin of the serpent, which he had cast from him, upon the skin of their flesh, instead of that adornment which had been cast away; and He clothed them.” – (THE TARGUM OF JONATHAN BEN UZZIEL, ON THE BOOK OF GENESIS. Source link)
This is what our skin looks like under a microscope:

Our flesh came from the skin of the serpent.  Our angelic bodies are trapped in the fallen state of human mortality.
“For I know that in me (that is, in my flesh,) dwelleth no good thing: for to will is present with me; but how to perform that which is good I find not.”(Romans 7: 18 KJV Holy Bible)
“For the flesh lusteth against the Spirit, and the Spirit against the flesh: and these are contrary the one to the other: so that ye cannot do the things that ye would.”(Galatians 5: 18 KJV Holy Bible)
FEATURED VIDEO: MUST WATCH SURPRISE ENDING 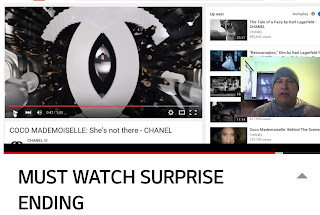