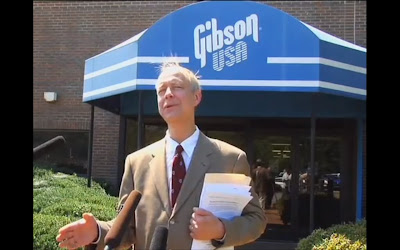 (NaturalNews) Due process under the law and assumed innocence before being proven guilty are two concepts that are apparently no longer applicable in the United States of America, at least as far as the federal government is concerned.

For the second time in two years, armed federal agents have illegally raided the manufacturing facilities of Gibson Guitars Corp., this time confiscating more than a million dollars worth of imported wood and ebony -- and they did so without proper notice or warning, without any valid reason, and without lawful charges of any kind.

Gibson, one of the world's premier guitar manufacturers, and a company that has continually tried to honestly and readily abide by domestic and international laws concerning its material sourcing while continuing to provide quality products to its customers, has for some reason landed in the cross fire of the federal gestapo.

Though Gibson has not violated any laws, and has gone above and beyond mandated requirements for sourcing sustainable wood and other materials for its instruments, the heavy hand of a bloated and out-of-control government has decided to unlawfully target the company for extinction.

According to a recent press statement made by Henry Juszkiewicz, Gibson's Chairman and CEO, armed marshals stormed the company's Nashville, Tenn., and Memphis, Tenn., manufacturing facilities on August 24, and proceeded to evacuate the buildings, shut down production, order all employees to go home, and steal more than a million dollars worth of rosewood and ebony that had been legally imported from India.

"It is extremely troubling," stated a calm and collected, but obviously shaken, Juszkiewicz during a recent press conference. "What is more troubling is that the Justice Department's position is that any guitar that we ship out of this facility is potentially an obstruction of justice, and to be followed with criminal charges."

US officials have actually refused to tell Gibson what it allegedly did wrong, and why the raid was conducted. The company was never notified of any potential violations prior to the raid, and no official charges were ever filed. By all appearances, the government simply decided one day to unlawfully storm the company's manufacturing units with loaded weapons, and is now attempting to destroy one of the last honest American manufacturers in existence.

"It is not illegal, it was exported legally, endorsed by the Indian government, it was Forest Stewardship Council recognized wood," stated Juszkiewicz concerning the stolen wood. "We're not in the wrong. We haven't actually been charged with any wrongdoing. And yet our entire operation has effectively been noticed to be shut down."

美國政府官員並不覺得他們甚至再需要一個理由去進行突襲
US government officials don't feel they even need a reason to perform raids anymore
The fact that the US federal government is refusing to disclose why it raided Gibson, as well as its added failure to press any proper legal charges against the company, suggests that there is truly no legitimate reason at all. Every guitar manufacturer imports rosewood and ebony from India and various other countries -- and many do not even have the same high quality standards as Gibson -- and yet, for whatever reason, Gibson has become the government's chosen target, despite the fact that it has broken no laws and has never been convicted of any crimes.

In today's America, in other words, government officials do not even need a legitimate reason to target a company, seize its goods, and shut it down. In total desecration of the rule of law, the federal government simply targets whomever it wants to these days, without reason or cause, and sends in its taxpayer-funded minions to perform the execution. In this case, the target is a leading US manufacturer of musical instruments.

While many other US instrument manufacturers have outsourced production to other companies, Gibson has hired 580 American employees in the past two years alone, which build its guitars domestically. It is one of the few major US companies that still produces a tangible, valuable product within the country's borders, and one that is led by a humble and forthcoming CEO who has chosen to stick his own neck out on the line in defense of his company and his employees.

But apparently none of this matters to the corrupt federal government which, ironically, is charged with defending and protecting companies like Gibson, not raiding and terrorizing them.

如果你擁有一部吉他，根據損壞萊西法你亦可能成為聯邦調查局目標
If you own a guitar, you too could be targeted by the Feds based on corrupted Lacey Law
Though federal officials have ordered that Gibson stop manufacturing and selling guitars, Juszkiewicz has instructed his employees to continue operations, indicating that he alone will take personal responsibility for any potential repercussions. Ceasing production indefinitely at the arbitrary command of federal officials, especially without a valid reason, would destroy the company.

So for the time being, Gibson is still manufacturing and distributing guitars, and waiting to see how the government responds. It is also trying to seek justice for the stolen wood, which was certified as legal and sustainable, though it has yet to make any considerable progress in this endeavor.

In the meantime, those who own Gibson guitars, and potentially even guitars of other brands, may want to prepare themselves for potential targeting by the federal government as well. The vague wording of the US Department of Agriculture's (USDA) Lacey Act of 2008, which is the law that was somehow used to warrant the Gibson raids, places all guitar owners and resellers in the cross fire of potential federal scrutiny.

"According to [The Lacey Act], if you bought a guitar from us and you resell it, you are criminally liable," stated Juszkiewicz. "Everyone who touches the product, the store owner who sells that guitar, is criminally liable. It doesn't matter whether you knew or not that there was some issue here. It's a pretty dangerous precedent in my opinion."

Coverage in the Calgary Herald adds that guitar owners who do not have proper documentation for their instrument could potentially face its confiscation if the Feds feel as though something about the guitar is in violation of the Lacey Act.

It does not matter if the guitar was produced in full accordance with the law -- if the government decides that some aspect of the guitar is in violation of the Lacey Act, it could theoretically seize it or any other wood-containing instrument at airports, country borders, and other areas, and even arrest the instrument owners in the process.

So there you have it. The US has literally devolved into an unbridled police state where the federal government freely raids companies, arrests innocent individuals, and performs other acts of domestic terrorism for absolutely no reason at all. The enemies of freedom that now run our government presume guilt rather than innocence, and they deny the constitutional protocols of due process that they are tasked with upholding in the process.

"People assume that if you're gonna be investigated by the federal government that you're guilty," stated Juszkiewicz about the lunacy of what his company now faces. "We can't even say that we're not guilty of this because we're just guilty of something that they can't tell us yet. Think about that, how do you respond to that?" 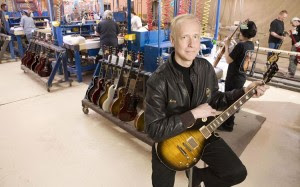 On Thursday, the iconic Gibson Guitar Corporation issued a press release stating that government officials raided their Tennessee manufacturing facility over warrants concerning the legality of the importation of wood purchased from India that they use in their world famous guitars. The wood–which is certified and regulated by the Forest Stewardship Council–is not illegal, but rather subject to a domestic law in India frowns upon the processing of this wood by non-Indians. (Gibson uses American labor for the processing.)

Gibson’s press release claims that, while this incident marks the second raid of their facility in around two years, this is the first of the raids to cost the company time and resources, as they needed to shut down operations. It seems as though this was all for naught.

The Federal Department of Justice in Washington, D.C. has suggested that the use of wood from India that is not finished by Indian workers is illegal, not because of U.S. law, but because it is the Justice Department’s interpretation of a law in India. (If the same wood from the same tree was finished by Indian workers, the material would be legal.) This action was taken without the support and consent of the government in India.

On August 24, 2011, around 8:45 a.m. CDT, agents for the federal government executed four search warrants on Gibson’s facilities in Nashville and Memphis and seized several pallets of wood, electronic files and guitars. Gibson had to cease its manufacturing operations and send workers home for the day, while armed agents executed the search warrants. Gibson has fully cooperated with the execution of the search warrants.

The fact that the government would issue warrants based on their interpretation of another country’s laws is laughable–and scary–in and of itself, but that they would demonize an American, non-unionized (coincidentally, I’m sure) company for something that isn’t even a crime (especially not in the American lawbooks) is a gross misjustice. Keep in mind that the Indian government itself wasn’t involved in the Gibson warrants and raid.

This unfortunate event begs the question, Why Gibson?

Putting aside the presumably misguided motivation to enforce another sovereign nation’s laws, why would a homegrown American company be the target of the Department of Justice in the first place?
It’s worth pointing out that Henry E. Juszkiewicz, Gibson’s Chief Executive Officer, is a donor to a couple of Republican politicians. According to the Open Secrets database, Juszkiewicz donated $2000 to Rep. Marsha Blackburn (R-TN07) last year, as well as $1500 each to Sen. Lamar Alexander (R-TN). Juszkiewicz also has donated $10,000 to the Consumer Electronics Association, a PAC that contributed $92.5k to Republican candidates last year, as opposed to $72k to Democrats. (The CEA did, however, contribute more to Democrats in the 2008 election cycle.)

When warrants as ridiculous such as these are issued and executed, there appears no other reason than because the company or individual at hand is being targeted, not because there is any sort of wrongdoing. As a company, Gibson is a legendary. They’ve done nothing wrong, except, apparently, deigning to have a Republican CEO.

The plot thickens, however.

One of Gibson’s leading competitors is C.F. Martin & Company. The C.E.O., Chris Martin IV, is a long-time Democratic supporter, with $35,400 in contributions to Democratic candidates and the DNC over the past couple of election cycles. According to C.F. Martin’s catalog, several of their guitars contain “East Indian Rosewood.” In case you were wondering, that is the exact same wood in at least ten of Gibson’s guitars.

The Gibson facility wasn’t raided over allegations of tax evasion, charges of embezzlement, or even something as drab as child labor. Not even close. It was raided over what the DOJ deems an inability to follow a vague domestic trade law in India (one that apparently the Indian government didn’t seem too concerned about enforcing) regarding a specific type of wood. Not illegal wood, just wood with obscenely specific procedural guidelines.

Stand with Gibson: They have the Law on their side, just not the government.