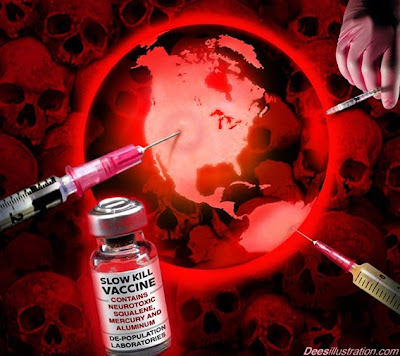 *NATIONAL AUTHORITIES FAILED TO REACT TO HIS RESEARCH
*國家當局未能對他的研究作出回應

A doctor in Sweden has found traces of the toxic metals arsenic and tin in GlaxoSmithKline’s swine flu Pandemrix vaccine.
瑞典的一位醫生在葛蘭素史克的豬流感Pandemrix疫苗，發現有毒金屬砷和錫的踪跡。
The consultant anaesthetist at a University Hospital said he was surprised to find “quite robust amounts of colloidal or nano-sized heavy metals” when he conducted an ICP analysis of GSK’s swine flu vaccine.
在大學醫院的顧問麻醉師說，他驚訝發現到“頗實在數量的膠體或納米大小的重金屬”，當他進行一項對葛蘭素史克豬流感疫苗的ICP分析。
He found the following concentration in Pandemrix: arsenic [As] = 2.421 ppm and tin [Sn] = 1.511 ppm.
他發現在Pandemrix中有以下濃度 ：砷[AS] = 2.421 ppm和錫 [SN] = 1.511 PPM。
There was no indication on the product details supplied by GSK that the Pandemrix vaccine with the ASO3 adjuvant contained these toxic compounds.

Colloidal or nano-sized arsenic is a strong and active haemolytic agent. In addition, both arsenic and tin are known to be carcinogenic, to disturb DNA and to be deadly poisonous.
It has been documented in scientific literature that colloidal or nano-sized arsenic and organotin (a toxic form of tin), can pass easily bypass the placenta, the blood-brain barrier as well as cell membranes and access to the central nerve system, where they can give rise to conditions imitating both Guillain Barrés Syndrome (GBS) and narcolepsy.

The doctor said that the arsenic and tin can only have been added to the vaccine deliberately or accidentally.

Both options are frightening, he said.

The doctor, who wished to remain anonymous, said he informed the Swedish authorities but got little reaction.

He said he was worried that the contamination of vaccines and medicines with toxic metals could be a world wide problem and was anxious to get the word out on the independent media since other aventues appeared to be blocked.

The scandal comes after a drug known as Mediator inFranceremained on the market killing between 500 to 2000 people in spite of warnings over its side effects.

At the end of 2010, the EU agreed new rules on pharmacovigiliance but it is not clear how effective these are when a Swedish doctor says that he found such obvious signs of toxic metals not just in the vaccines but in other drugs.

The doctor conducted tests on the Pandemrix vaccine as part of a personal investigation after one of his patients complained about pain at the injection site.

After having been injected with Pandemrix as part of the swine flu mass vaccination in 2009, the patient, her husband and their three children all developed intense pain at the site of injection.

The vaccine was administered by mixing antigen and adjuvant from two separate glass vials before injecting it into the muscle.

On a hunch, the doctor analysed the content of the vials to see if fragments of rubber or plastic material from the lid of the vials had become attached to the tip of the needle and had triggered “a foreign body reaction” at the injection site.

Instead, he found toxic metals had been added to the vaccine.

In February 2009, Baxter contaminated 72 kilos of seasonal flu vaccine with the bird flu virus and sent it to labs in 4 different countries, nearly triggering a global bird flu outbreak.

Because the contamination of the vaccine occurred in a biosecurity level 3 lab, an accidental contamination can be virtually ruled out.

After I filed charges in April 2009 against Baxter, the police inAustriastarted an investigation. The charges were dropped in September 2009 shortly before the mass swine flu vaccine campaign began. Baxter’s swine flu vaccine was eventually given a licence but it did not have the adjuvant or thiomersal, mercury, linked to autism.

In Austria, only 4% of the population took the swine flu vaccine. In Italy and Spain only 1% of the people took the jab. About 200 doctors in Spain launched blogs to warn people that the vaccine was not adequately tested.

Pandemrix has been linked with narcolepsy inFinland,Sweden,NorwayandFrance.