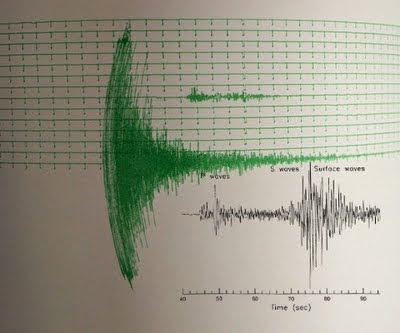 The jpg shows the Washington nuclear detonation in green compared to an earthquake in black.
JPG以綠色展示華盛頓核爆炸，相比黑色的地震。

The Aquino paper on HAARP appeared in July, which means that the scientists are now onto HAARP.
阿基諾對HAARP的論文出現在7月，這意味著科學家們現在注意到HAARP。

ALSO Presscore writes -
Presscore亦寫道 -
Seismology charts are now revealing that the 5.8 magnitude tremor that rattled the entire East Coast including Washington DC was not a natural earthquake but an earthquake that resulted from an underground nuclear detonation. The image above is a seismograph from Washington and Lee University, (similar one found on www2.tricities.com website) about 85 miles southwest of the earthquake’s epicenter in Mineral. The green lines indicates the tremor that was felt in Washington DC which caused damaged to the Washington Memorial and the Washington National Cathedral. The black lines is a transparent overlay of a seismograph from a pdf file from Virginia Division Mineral Resources on Earthquakes.
地震圖表現在揭示，擾亂整個東海岸包括華盛頓首都的5.8級震顫，不是一次天然地震，卻是一次地下核爆炸造成的地震。上面的影像是一地動儀來自華盛頓及李氏大學（類似的一張可在www2.tricities.com網站上找到），約在地震震中西南85英里的礦物。綠色線表示在華盛頓首都感受到的震顫，即那對華盛頓紀念堂和華盛頓國家大教堂造成損壞的。黑線則是來自弗吉尼亞州礦產資源部的一張地震儀透明圖來自一份PDF文檔。
The jpg in the article shows the Washington nuclear detonation in green compared to an earthquake in black.
文章中的JPG以綠色展示華盛頓核爆炸，相比黑色的地震。 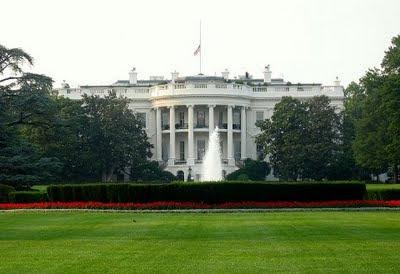 An earthquake has never been felt in Washing DC before. Denver is familiar with earthquakes. Is it just a coincidence that ABC news anchors warned of possible terrorist attacks against the United States before the 10th anniversary of 9/11?

The U.S. Geological Survey said the Virginia earthquake was 3.7 miles deep. Shaking was felt at the White House and all over the East Coast, as far south as Chapel Hill, N.C. Parts of the Pentagon, White House and Capitol were evacuated. The quake was in Mineral, Va., in Louisa County.

The magnitude 5.3 Colorado quake hit nine miles southwest of Trinidad, or 180 miles south of Denver, according to the U.S. Geological Survey’s National Earthquake Information Center in Golden. It had an estimated depth of 2.5 miles (4 kilometers) and was felt in a relatively large area of southern Colorado and northern New Mexico.

The revolution seems to have started.

The bankers are in serious trouble.