You can always gauge the level of desperation in a political movement by its inability to maintain a coherent message. This usually happens when the reality visible in the world runs contrary to the reality being professed from their pulpit.
在一個政治運動中，你總是可以衡量絕望的水平，以它的無能去維持一個連貫的訊息。這通常發生，當現實可在世界見到卻與講壇上他們宣示的現實背道而馳。
In the final days of Nazi Germany, elite officers were all huddled in their Berlin bunker, eating foie gras and drinking champagne, as the Red Army closed in on their capital. Even in the 11th hour, Hitler was convinced that the righteous armies of the Fatherland would regroup and stem the Soviet tide. After all, Germany had achieved so much in such a short time, and they had no reason to think that their epic revolution of “National Socialism” would not succeed.
在納粹德國的最後日子，精英官員都蜷縮在他們的柏林地堡在吃鵝肝和喝香檳，當紅軍在包圍他們的首都。即使在第11個小時，希特勒被說服祖國的正義軍隊會重組和遏制蘇聯的大潮。畢竟，德國在這麼短的時間已經達成這麼多，及他們沒有理由認為他們的史詩式“國家社會主義”革命會不成功。
It seems now that, in the face of more and more record-breaking winters, increased polar ice cover and an endless string of academic scandals, that Al Gore and the global warming/climate change movement are having their own Berlin bunker moment.
現在看來，在面對越來越多的破紀錄冬季，增加的極地冰蓋和一串沒完沒了的學術醜聞，那戈爾和全球變暖/氣候變化運動都有他們自己的柏林地堡時刻。
Having watched Gore’s recent 24 Hours of Reality internet media show this past week, I could see that very same level of desperation present in all of the day’s presentations. I saw a level of incoherence not seen before in the climate change crusade. I saw a faith-based movement clearly facing a rapidly unraveling ideology. Even traditional global warming activists have been wary of having anything to do with Gore’s telethon, where presenter upon presenter attempted in vain to cherry pick any extreme region weather event on the globe and connect it to man-made global warming.
過去一周已看了戈爾最近的24小時互聯網媒體節目的現實，我可以看到同一非常絕望的水平在全天的演講當中，我看到一個之前從沒有在氣候變化遠征見過的不連貫水平，我看到一個信仰為基的運動清楚地面對著一個迅速地瓦解的意識形態。即使傳統的全球變暖積極分子已對戈爾的長時間電視廣播節目小心翼翼，其中主持人之上的主持人，妄圖作最佳挑選任何地球上的極端的地區天氣事件及連接它到人為全球變暖。 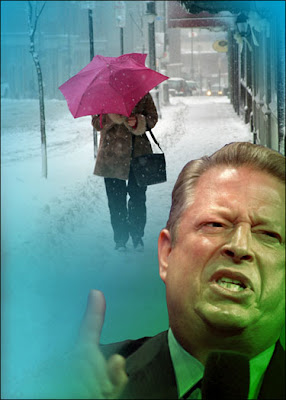 One of the more disturbing thrusts of the presentations streamed that day was a rallying call for academics and education professionals to do a better job in delivering their message of man-made global warming and climate Armageddon… to young children. In other words, there appeared to be a need to indoctrinate kids at a young age if the movement is to survive. Presenters were quite vocal about their disdain for “deniers”, upset about the scourge of intelligent adult skepticism. One presenter even called on children to ‘put pressure on their parents to be more responsible’. One last propaganda blitz before the fall.

I could not help but feel here that global warmists must be feeling as Joseph Goebbels did, faced with the horror of his dream of a Utopian Reich disintegrating before his eyes, a man whose final move was a campaign to mobilize children, getting the kids to man gun posts in hopes of repelling the inevitable Soviet advance towards ground zero. When educated adults are finally coming to their senses, gathering enough courage to go and look outside, and determine for themselves that the sky is not falling, then it is perhaps the most cynical and ruthless area of exploitation for a fundamentalist movement to target the innocent minds of young children to do their bidding.

A real dose of reality is on the way however, one not apparent in Al Gore’s media montage. If you live in the Northern hemisphere, you can expect record-breaking cold spells this winter, including early blizzards… and a string of sub zero temperature events.

In past years the UK’s official weather forecaster, the Met Office, has come under heavy fire from critics having failed to predict with any level of accuracy a succession of record-breaking freezes in their country. As a result, municipalities failed to stock up on grit for the roads, allocate money for snow ploughs and other key provisions. This had dire consequences- a number of deaths last winter in the UK were related to unforeseen weather conditions. This year appears to be different as weather experts, in a bid to salvage their credibility and distance themselves from the likes of the IPCC’s failing projections and scandals like Climategate, for the first time in years are sounding the cold alarm.

As a recent Daily Mail report explains, forecasters are warning that Britain is about to experience an early winter, with snow expected to arrive as soon as next month. The Met Office now admits that we can expect cold temperatures as early as October, and Weather Services International agrees, saying that in October, November and December we will be hit with temperatures approximately two degrees lower than the average.

James Madden of Exacta Weather also agrees, “I expect to see the first signs of some moderate to heavy snowfalls as early as October or November in certain parts of the UK. Huge swirly low-pressure systems also offer the potential for widespread disruption from heavy snowfall across many parts of the UK including the South, as they clash with the predominant cold air.” Madden also added that Scotland and the North would face the worst weather, including possible ‘blizzard-like conditions’ brought on by snow from the Arctic for prolonged periods.

Another vocal opponent of Al Gore and the climatist fundamentalist movement is Weather Action, a UK-based long range weather forecaster led by scientist Piers Corbyn. Weather Action has also issued a stark warning that four major storms are coming in the next 6 weeks and that it is very important that emergency services are aware of what is over the horizon. The organization has worked out, with about 80% accuracy, what are the real factors that drive climate on this planet, namely, a combination of solar activity, lunar cycles and changes in the earth’s magnetic fields.

Weather Action has also identified that cold weather can have disastrous consequences for agricultural production if farmers are not prepared. For instance, in the production of Maize, frosts forecasts means the crop should be planted late, and those who planted early lost out. In Dairy production, a cold spring forecast means that grass would be late so it would be worth spending on fertilizer.

Weather Action’s calculations and forecasts are based on the use of mathematics and physics, unlike the IPCC’s elite group of ‘climate scientists’ who have been basing their apocalyptic predictions of the future on a collection of rigged computer-modeled projections. Herrs Gore, Strong, Hansen, Mann and Jones relied on these sacred computer-modeled climate mock-ups to get their initial gravy train going, and it worked. Now the wheels are beginning to come off that gravy train.

As global temperatures have declined since 1998, one can only deduce that the alarmist tone of Al Gore’s self-styled “scientific consensus” has already been discredited, and people and their governments around this planet should move back on track with reality as soon as possible.

The most bizarre turn of green ideology is that many top climate zealots have been claiming“that global cooling is caused by global warming”. It’s a rather bizarre idea that has been successfully implanted into the minds of a faithful flock, but it is quite obviously the death pangs of a flock who have lost their way.

In this twisted zone of eco-spin, millions could perish from famine or a spike in food prices brought on by early frosts, and elderly residents might die trapped in their homes without sufficient heat, and yet, climate fantasists will tell you that this is all down to man-made global warming, in much the same way that Pat Robertson told us that Hurricane Katrina and and the Haiti earthquake were brought on by God’s vengeance for those peoples’ sins. Climate fundamentalists, whether they are cognisant of this or not, are operating on the same level of misdirection as Pat Robertson.

Still there are millions of dollars a day around the globe being spent researching quack Victorian science fiction ideas as ridiculous as a man-made simulated volcano in England, or a giant cold blanket to cover Greenland’s glaciers.

The longer mainstream society entertains the sort of intellectual indulgence that the Man-Made Global Warming movement is offering out, the more valuable time and money we continue to waste on an ideology that was actually never based on real science- or hard facts. The whole ideology fusing man-made global warming and an illusion of climate crisis was always based on one main element- fear, followed by a powerful politically correct idea of collective guilt. These were deployed against populations in order to achieve the end goal, which was the collectivization and control of society through various legal and economic instruments like carbon emissions trading, an expensive process which will ultimately end in a redistribution of society’s wealth upwards.

Meanwhile, after 10 years and hundreds of billions in precious public and private money spent on an ideological crusade to save the planet from a nemesis that never existed, real environmental threats have gained ground on mankind. The consolidation of genetically modified food production, the introduction of cross-breed chimera species into our ecosystem, the continual dumping of toxic waste and chemicals into our oceans and water supplies, known carcinogens being spread via popular consumer products and the mass release of radioactive pollution through a series industrial incidents- all of which actually threaten mankind’s place and progeny on the planet, and still we see little progress made in pushing them back to truly safe levels.

In the end, Gore’s “24 hours of Reality” only reinforced my belief that there is no “climate crisis”- therefore we should do nothing to solve it, let alone fight it. Still, his CEO and President for the media event, Maggie Fox, implores her troops to soldier on. “It is up to you to continue to stand up for reality and share the truth about the climate crisis. We will succeed because we must.”