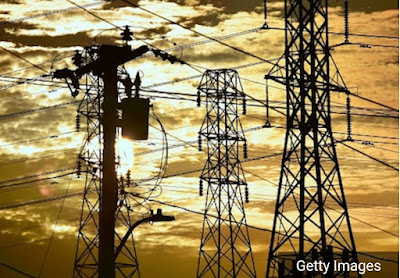 Several nations, including China and Russia, are building powerful nuclear bombs designed to produce super-electromagnetic pulse (EMP) waves capable of devastating all electronics—from computers to electric grids—for hundreds of miles, according to a newly-released congressional study.

A report by the now-defunct Commission to Assess the Threat to the United States from EMP Attack, for the first time reveals details on how nuclear EMP weapons are integrated into the military doctrines of China, Russia, North Korea, and Iran.

The report discloses how those states could use EMP attacks in theaters of battle in the Middle East, Far East, Europe, and North America.

"Nuclear EMP attack is part of the military doctrines, plans, and exercises of Russia, China, North Korea, and Iran for a revolutionary new way of warfare against military forces and civilian critical infrastructures by cyber, sabotage, and EMP," the report states.

"This new way of warfare is called many things by many nations: In Russia, China, and Iran it is called Sixth Generation Warfare, Non-Contact Warfare, Electronic Warfare, Total Information Warfare, and Cyber Warfare."

Nuclear-electronic warfare also is called "Blackout War" because of its effects on all electronic devices.

EMP attacks will be carried out at such high altitudes they will produce no blast or other immediate effects harmful to humans. Instead, three types of EMP waves in seconds damage electronics and the strikes are regarded by adversaries as not an act of nuclear war.

"Potential adversaries understand that millions could die from the long-term collateral effects of EMP and cyber-attacks that cause protracted black-out of national electric grids and other life-sustaining critical infrastructures," the report said.

The attacks are regarded by enemy military planners as a relatively easy, potentially unattributable means of inflicting mass destruction and forcing opponents to capitulate.

EMP strikes can be adjusted in the size of the area and the intensity of the wave by detonating at different altitudes. The closer to the earth the more powerful is the pulse. The higher the altitude, the wider the area of impact.

"A single nuclear weapon can potentially make an EMP attack against a target the size of North America," the report said. "Any nuclear weapon detonated at an altitude of 30 kilometers [18.6 miles] or higher will generate a potentially catastrophic EMP."

Super-EMP bombs produce gamma rays that generate a peak EMP field of 200,000 volts per meter—enough to fry strategic communications and intelligence systems. China, Russia, and probably North Korea are said to have these arms, according to the commission. The United States has no super-EMP weapons in its nuclear arsenal.

The bombs do not require accuracy and the weapons do not require a re-entry vehicle, heat shield, and shock absorbers required for nuclear warheads detonated in the atmosphere above targets.

The weapons can be delivered through a variety of means including satellites, long- or medium-range missile; short-range missiles launched from a freighter; from some cruise missiles and anti-ship missiles; from jets or a commercial jetliner; or a meteorological balloon.

The declassified report was cleared for release by the Pentagon after a security review and provides graphics showing for the first time in an official government publication how nuclear detonations triggered 18.6 miles to 248 miles above the earth will produce targeted electronic waves stretching up to 1,500 miles.

Portions of the report are redacted in order to prevent adversaries from learning U.S. electronic vulnerabilities.

The report shows how Iran—a state U.S. intelligence agencies have assessed is one year away from building a nuclear weapon—could use a single nuclear weapon fired on a medium-range missile to black out Israel, Egypt and Israel together, or Saudi Arabia without creating blast damage.

China also could use EMP weapons to plunge the island of Taiwan into electronic darkness and disable aircraft carrier strike groups sailing to defend Taiwan from a mainland attack. 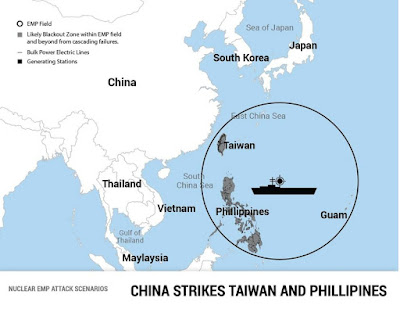 North Korea could set off a nuclear bomb in space over Japan. Both Japan and Taiwan are heavily reliant on electronics that are vulnerable to EMP.

Russia could fire off one of its super-EMP bombs over Europe to throw NATO and the continent into darkness and create chaos as well, according to the report.

The Islamic State might acquire a nuclear weapon from North Korea or Iran along with a short-range missile that could loft it into space and detonate over Italy.

For the United States, an EMP war scenario is shown as the result of conflicts involving Russian strikes on Canada and U.S. retaliation using conventional precision strikes.

In a major conflict with either China or Russia, the first shot in the war could be a space burst of a super EMP weapon designed to knock out U.S. nuclear command and control and weapons.

"A super-EMP warhead, in the possession of Russia or North Korea, could put at risk the best protected U.S. assets, even threatening the survival of the U.S. nuclear deterrent," the report said.

Moscow has adopted a new nuclear strategy called escalate to de-escalate a conflict with nuclear arms that the report suggests is tailored to space-based EMP attacks.

Russian nuclear missile submarines could use super-EMP warhead to paralyze U.S. strategic and conventional forces and blackout the national grid.

The report states that 14 EMP bursts up to 60 miles would create powerful electronic waves for key facilities, including national missile defenses at Alaska and California; the command center at the Pentagon outside Washington; and the North American Aerospace Defense Command (NORAD) in Colorado.

Bomber wings in Missouri, Louisiana, South Dakota, and Texas also could be blacked out along with nuclear missile submarine bases in Washington and Georgia.

A U.S.-China conflict over Taiwan could lead to Beijing conducting a black-out EMP strike on the lower 48 states that it hopes would disrupt military command and control and communications and knock the United States out of the regional Asian conflict. 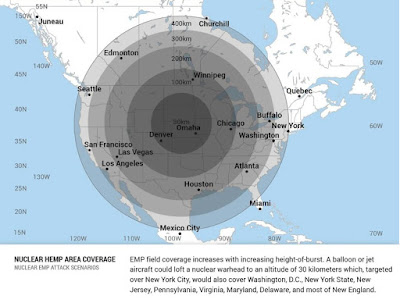 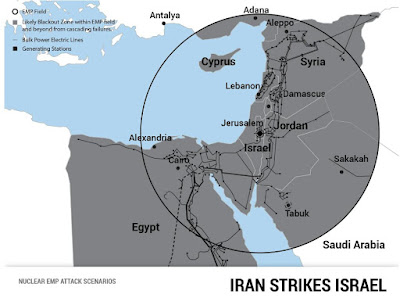 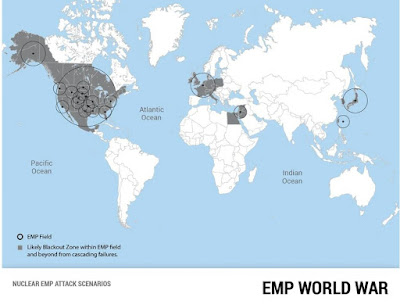 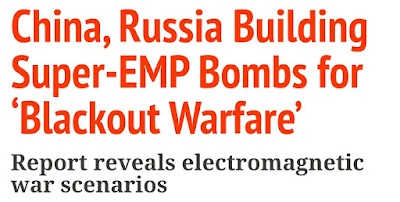