The Making Of Juan Guaidó: How The US Regime Change Laboratory Created Venezuela's Coup Leader 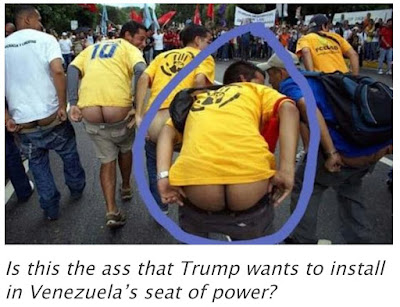 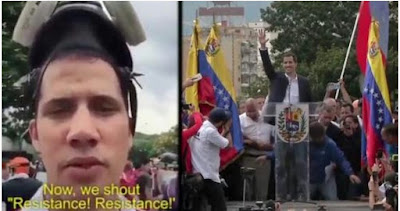 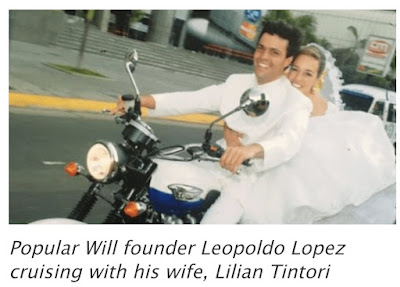 Juan Guaidó is the product of a decade-long project overseen by Washington’s elite regime change trainers. While posing as a champion of democracy, he has spent years at the forefront of a violent campaign of destabilization.
Before the fateful day of January 22, fewer than one in five Venezuelans had heard of Juan Guaidó. Only a few months ago, the 35-year-old was an obscure character in a politically marginal far-right group closely associated with gruesome acts of street violence. Even in his own party, Guaidó had been a mid-level figure in the opposition-dominated National Assembly, which is now held under contempt according to Venezuela’s constitution.


But after a single phone call from from US Vice President Mike Pence, Guaidó proclaimed himself president of Venezuela. Anointed as the leader of his country by Washington, a previously unknown political bottom-dweller was vaulted onto the international stage as the US-selected leader of the nation with the world’s largest oil reserves.
Echoing the Washington consensus, the New York Times editorial board hailed Guaidó as a “credible rival” to Maduro with a “refreshing style and vision of taking the country forward.” The Bloomberg News editorial board applauded him for seeking “restoration of democracy” and the Wall Street Journal declared him “a new democratic leader.” Meanwhile, Canada, numerous European nations, Israel, and the bloc of right-wing Latin American governments known as the Lima Group recognized Guaidó as the legitimate leader of Venezuela.
While Guaidó seemed to have materialized out of nowhere, he was, in fact, the product of more than a decade of assiduous grooming by the US government’s elite regime change factories. Alongside a cadre of right-wing student activists, Guaidó was cultivated to undermine Venezuela’s socialist-oriented government, destabilize the country, and one day seize power. Though he has been a minor figure in Venezuelan politics, he had spent years quietly demonstrated his worthiness in Washington’s halls of power.

“Juan Guaidó is a character that has been created for this circumstance,” Marco Teruggi, an Argentinian sociologist and leading chronicler of Venezuelan politics, told The Grayzone. “It’s the logic of a laboratory – Guaidó is like a mixture of several elements that create a character who, in all honesty, oscillates between laughable and worrying.”

Diego Sequera, a Venezuelan journalist and writer for the investigative outlet Misión Verdad, agreed: “Guaidó is more popular outside Venezuela than inside, especially in the elite Ivy League and Washington circles,” Sequera remarked to The Grayzone, “He’s a known character there, is predictably right-wing, and is considered loyal to the program.”


While Guaidó is today sold as the face of democratic restoration, he spent his career in the most violent faction of Venezuela’s most radical opposition party, positioning himself at the forefront of one destabilization campaign after another. His party has been widely discredited inside Venezuela, and is held partly responsible for fragmenting a badly weakened opposition.

“‘These radical leaders have no more than 20 percent in opinion polls,” wrote Luis Vicente León, Venezuela’s leading pollster. According to León, Guaidó’s party remains isolated because the majority of the population “does not want war. ‘What they want is a solution.’”

But this is precisely why he Guaidó was selected by Washington: He is not expected to lead Venezuela toward democracy, but to collapse a country that for the past two decades has been a bulwark of resistance to US hegemony. His unlikely rise signals the culmination of a two decades-long project to destroy a robust socialist experiment.


Since the 1998 election of Hugo Chávez, the United States has fought to restore control over Venezuela and is vast oil reserves. Chávez’s socialist programs may have redistributed the country’s wealth and helped lift millions out of poverty, but they also earned him a target on his back.
In 2002, Venezuela’s right-wing opposition briefly ousted Chávez with US support and recognition, before the military restored his presidency following a mass popular mobilization. Throughout the administrations of US Presidents George W. Bush and Barack Obama, Chávez survived numerous assassination plots, before succumbing to cancer in 2013. His successor, Nicolas Maduro, has survived three attempts on his life.
The Trump administration immediately elevated Venezuela to the top of Washington’s regime change target list, branding it the leader of a “troika of tyranny.” Last year, Trump’s national security team attempted to recruit members of the military brass to mount a military junta, but that effort failed.
According to the Venezuelan government, the US was also involved in a plot, codenamed Operation Constitution, to capture Maduro at the Miraflores presidential palace; and another, called Operation Armageddon, to assassinate him at a military parade in July 2017. Just over a year later, exiled opposition leaders tried and failed to kill Maduro with drone bombs during a military parade in Caracas.
More than a decade before these intrigues, a group of right-wing opposition students were hand-selected and groomed by an elite US-funded regime change training academy to topple Venezuela’s government and restore the neoliberal order.

On October 5, 2005, with Chavez’s popularity at its peak and his government planning sweeping socialist programs, five Venezuelan “student leaders” arrived in Belgrade, Serbia to begin training for an insurrection.
The students had arrived from Venezuela courtesy of the Center for Applied Non-Violent Action and Strategies, or CANVAS. This group is funded largely through the National Endowment for Democracy, a CIA cut-out that functions as the US government’s main arm of promoting regime change; and offshoots like the International Republican Institute and the National Democratic Institute for International Affairs. According to leaked internal emails from Stratfor, an intelligence firm known as the “shadow CIA,” “[CANVAS] may have also received CIA funding and training during the 1999/2000 anti-Milosevic struggle.”

CANVAS is a spinoff of Otpor, a Serbian protest group founded by Srdja Popovic in 1998 at the University of Belgrade. Otpor, which means “resistance” in Serbian, was the student group that gained international fame – and Hollywood-level promotion – by mobilizing the protests that eventually toppled Slobodan Milosevic. This small cell of regime change specialists was operating according to the theories of the late Gene Sharp, the so-called “Clausewitz of non-violent struggle.” Sharp had worked with a former Defense Intelligence Agency analyst, Col. Robert Helvey, to conceive a strategic blueprint that weaponized protest as a form of hybrid warfare, aiming it at states that resisted Washington’s unipolar domination. 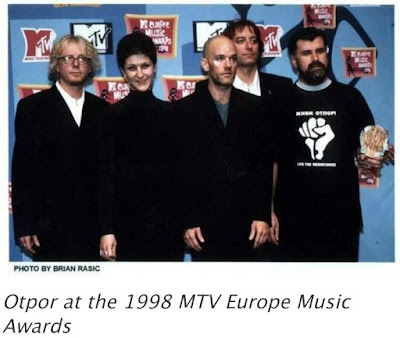 Otpor was supported by the National Endowment for Democracy, USAID and Sharp’s Albert Einstein Institute. Sinisa Sikman, one of Otpor’s main trainers, once said the group even received direct CIA funding. According to a leaked email from a Stratfor staffer, after running Milosevic out of power, “the kids who ran OTPOR grew up, got suits and designed CANVAS… or in other words a ;export-a-revolution’ group that sowed the seeds for a NUMBER of color revolutions. They are still hooked into U.S. funding and basically go around the world trying to topple dictators and autocratic governments (ones that U.S. does not like ;).”
Stratfor revealed that CANVAS “turned its attention to Venezuela” in 2005 after training opposition movements that led pro-NATO regime change operations across Eastern Europe.
While monitoring the CANVAS training program, Stratfor outlined its insurrectionist agenda in strikingly blunt language: “Success is by no means guaranteed, and student movements are only at the beginning of what could be a years-long effort to trigger a revolution in Venezuela, but the trainers themselves are the people who cut their teeth on the ‘Butcher of the Balkans.’ They’ve got mad skills. When you see students at five Venezuelan universities hold simultaneous demonstrations, you will know that the training is over and the real work has begun.”

The “real work” began two years later, in 2007, when Guaidó graduated from Andrés Bello Catholic University of Caracas. He moved to Washington DC to enroll in the Governance and Political Management Program at George Washington University under the tutelage of Venezuelan economist Luis Enrique Berrizbeitia, one of the top Latin American neoliberal economists. Berrizbeitia is a former executive director of the International Monetary Fund who spent more than a decade working in Venezuelan energy sector under the oligarchic old regime that was ousted by Chavez.
That year, Guaidó helped lead anti-government rallies after the Venezuelan government declined to to renew the license of Radio Caracas Televisión (RCTV). This privately-owned station played a leading role in the 2002 coup against Hugo Chavez. RCTV helped mobilize anti-government demonstrators, falsified information blaming government supporters for acts of violence carried out by opposition members, and banned pro-government reporting amid the coup. The role of RCTV and other oligarch-owned stations in driving the failed coup attempt was chronicled in the acclaimed documentary, The Revolution Will Not Be Televised.
That same year, the students claimed credit for stymying Chavez’s constitutional referendum for a “21st century socialism” that promised “to set the legal framework for the political and social reorganization of the country, giving direct power to organized communities as a prerequisite for the development of a new economic system.”
From the protests around RCTV and the referendum, a specialized cadre of US-backed class of regime change activists was born. They called themselves “Generation 2007.”
The Stratfor and CANVAS trainers of this cell identified Guaidó’s ally – a street organizer named Yon Goicoechea – as a “key factor” in defeating the constitutional referendum. The following year, Goicochea was rewarded for his efforts with the Cato Institute’s Milton Friedman Prize for Advancing Liberty, along with a $500,000 prize, which he promptly invested into building his own Liberty First (Primero Justicia) political network. 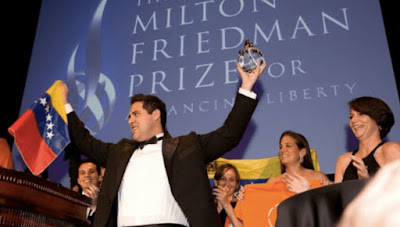 Friedman, of course, was the godfather of the notorious neoliberal Chicago Boys who were imported into Chile by dictatorial junta leader Augusto Pinochet to implement policies of radical “shock doctrine”-style fiscal austerity. And the Cato Institute is the libertarian Washington DC-based think tank founded by the Koch Brothers, two top Republican Party donors who have become aggressive supporters of the right-wing across Latin America.
Wikileaks published a 2007 email from American ambassador to Venezuela William Brownfield sent to the State Department, National Security Council and Department of Defense Southern Command praising “Generation of ’07” for having “forced the Venezuelan president, accustomed to setting the political agenda, to (over)react.” Among the “emerging leaders” Brownfield identified were Freddy Guevara and Yon Goicoechea. He applauded the latter figure as “one of the students’ most articulate defenders of civil liberties.”
Flush with cash from libertarian oligarchs and US government soft power outfits, the radical Venezuelan cadre took their Otpor tactics to the streets, along with a version of the group’s logo, as seen below: 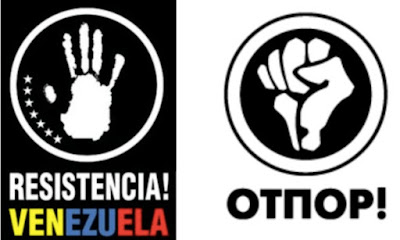 In 2009, the Generation 2007 youth activists staged their most provocative demonstration yet, dropping their pants on public roads and aping the outrageous guerrilla theater tactics outlined by Gene Sharp in his regime change manuals. The protesters had mobilized against the arrest of an ally from another newfangled youth group called JAVU. This far-right group “gathered funds from a variety of US government sources, which allowed it to gain notoriety quickly as the hardline wing of opposition street movements,” according to academic George Ciccariello-Maher’s book, “Building the Commune.”
While video of the protest is not available, many Venezuelans have identified Guaidó as one of its key participants. While the allegation is unconfirmed, it is certainly plausible; the bare-buttocks protesters were members of the Generation 2007 inner core that Guaidó belonged to, and were clad in their trademark Resistencia! Venezuela t-shirts, as seen below: 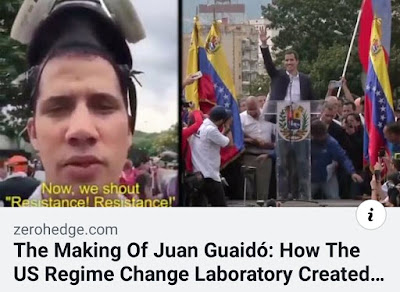