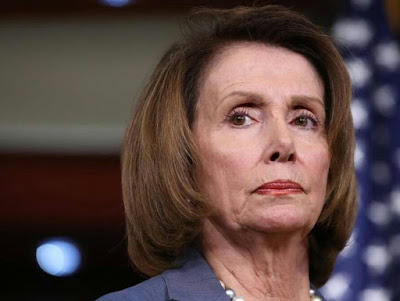 Meet your new acting President, at least that is what the Russians are saying. She has defeated Trump’s wall, border security and she was even allowed to get away with cancelling the State of the Union Speech. This is unprecedented and it is called a coup.

Recently, I wrote a piece entitled “The Trump Train Is Dead On Arrival“.  Briefly I asserted that the Trump administration is dead in the water. He had been defeated by the Deep State and their minion Nancy Pelosi.

Taking the Temperature of the Nation

I told my colleagues that this was a bell-weather article that would gauge the mood of conservatives by how they responded to my assertion that Trump is losing is base and his administration is absolutely paralyzed on key issues. I expected there to be a strong backlash against my conclusions. Although there was the occasional name-calling, about 90% of the people that wrote to me in response to the article, were overwhelmingly in agreement with the facts and the conclusions which arose from the article. Here are examples of both positions.

…Hodges is a treasonous bastard, his mother is a whore…his father laid down with .___…
…Mr. Hodges gives the Independent Media a black eye. Trump cares about all of us. At the end of the day, Hodges will be proven wrong… Hodges must be some kind of  a transvestite who____…

These people represent some who believe that I have stopped supporting Donald Trump. That is not the case. If election day were today, I would still cast my ballot for Trump. Why? Because he is is the “only girl on this desert Island”. Every other candidate is not your friend and their candidacy (eg Kamala Harris, Elizabeth Warren) constitutes a real and present danger to the people.

How much of a danger? With the arrest of Roger Stone I believe that we are witnessing a landmark event where, as Stone stated himself, Nazi Gestapo tactics are being rolled out by the Deep State. This will culminate in what Obama’s benefactor, Weathermen Underground’s Bill Ayers told former FBI informant, the late Larry Grathwohl, “When we take over, we will have to send 5o million to re-education camps and we will have to do away with, meaning murder, 25 million”. Bill Ayers prediction is being fast- 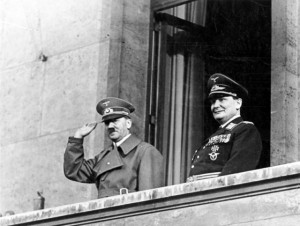 tracked as witnessed by recent events. When we look at the arrest of Stone, it is easy to see where America is at. A man in his 70’s, wanted on a bogus non-violent criminal charge, is swat-teamed at 5AM. This is also a man, because of his age, who probably could not fight his way out of a wet paper bag, was dragged out of his house in leg irons when two agents without handcuffs could’ve arrested him.

Even the State owned media (CNN) was there to film and subsequently intimidate all conservative members of the Independent Media.  However, when we get around the inappropriateness and look at content, there are no facts to refute my assertions that Trump is dead in the water and his base is rapidly disintegrating because he has failed to deliver on key issues.

Excerpts From People Jumping Off the Trump Train

This is what some of my readers said about yesterday’s article:

…I knew Trump was Deep State all along…
Mr. Hodges, it took you long enough to see through the facade, Trump is clearly illuminati…
…I know you are correct….they must threatened his family…
…he is going to get assassinated, what would you do?…  (this came from a 4 page email)

I sympathize with the emotional, non-intellectual outbursts expressed by some of my readers for asserting that the Trump train is derailed. I am angry with myself for printing the story, except that it is true. America needed to Trump to deliver and for where we are presently at, I am in a deep state of deep mourning and suspect that the excerpts of the following followers of the CSS accurately expressed.

Trump Has Turned Into a Weak Excuse Maker

Following the arrest of Roger Stone, Trump tweeted out the following:

Donald J. Trump
✔@realDonaldTrump
If Roger Stone was indicted for lying to Congress, what about the lying done by Comey, Brennan, Clapper, Lisa Page & lover, Baker and soooo many others? What about Hillary to FBI and her 33,000 deleted Emails? What about Lisa & Peter’s deleted texts & Wiener’s laptop? Much more!
130K
6:42 AM – Jan 26, 2019
Twitter Ads info and privacy

Forgetting for a moment that Trump has the power of pardon and Roger Stone could immediately be placed outside the power of the DOJ, Trump could also fire Mueller. Clearly, Trump’s tweet is addressing the DOJ (ie the “they” that is  referenced). The last time I looked, Trump, as President is in charge of both the FBI and the DOJ. He can order the arrest and indictment of all the above-named perps in his tweet. Instead, he is conveying the message that the DOJ is in charge of him. Under the Constitution, Trump can fire any FBI or DOJ person who does not follow his orders. Eventually, Trump would find a moderately loyal Deep Stater who would to hell with this, I need my federal pension and prosecute these Deep State crooks that Trump’s tweet identifies. IN SHORT, TRUMP HAS ACQUIESCED THE POWER OF THE PRESIDENCY TO A FEDERAL BUREAUCRACY WHO HE’S IN CHARGE OF. AND HIS ACQUIESCENCE, OR COWARDICE DOES NOT END WITH THE DOJ AND THE FBI…

Cowering in the Corner of the Oval Office

In the following short video, I appear to be engaging in sarcasm, I am not. I suggested that Trump allow Pelosi to deliver the State of the Union Address. Why, because committed the unprecedented act of letting a lower ranking federal official cancel the speech over the objections of the President. The previous partial government shutdown has nothing to do with the President speaking to the people about the condition of the country. 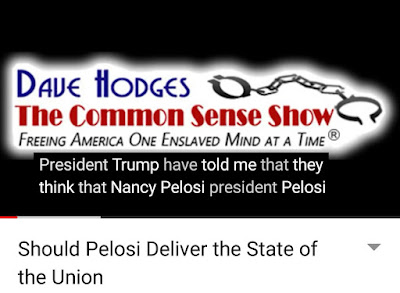 
It is interesting to note that the above video drew the ire of many and that is a good sign. There is still some life in this country.  However, at this point in time we cannot look for Trump to step up, he is cowering in the Oval Office. The answer to our dilemma falls to us. What are WE THE PEOPLE GOING TO DO?  We don’t have long, because it won’t be long until Mueller is not arresting the Roger Stone’s of the country, he will be arresting Pence and Trump. And since Trump is seemingly paralyzed, WE THE PEOPLE, need to decide what we are going to do about this current state of affairs? And by the way, how could we expect Trump to act since most of this country has sat on their fat ____ and done absolutely nothing to push back against the Deep State takeover of this country. To Trump I would say that you are obviously a marked man and I am sympathetic. But wouldn’t you rather die on your feet than on your knees?
The Russians and the Chinese have stated that Pelosi is running the country. Some other allies are stating that America is being run in two opposite camps. In other words, Trump is not really in charge. This makes it very likely that we will be attacked in a preemptive military strike and this will be the topic of the next article.
Before concluding, I want to deliver a stern warning. IF the American people do not stand up to the Deep State we will surely be attacked and invaded. We should look at France very carefully. They are showing us our future and France will soon experience a civil bloodbath like they have not seen since the French Revolution. I do not want to be misquoted here. Every time Trump backs down, you and me are in more danger on a number of fronts. Some of you will understand exactly what I am saying here and some of you need me to explain it further in the next installment of this series. 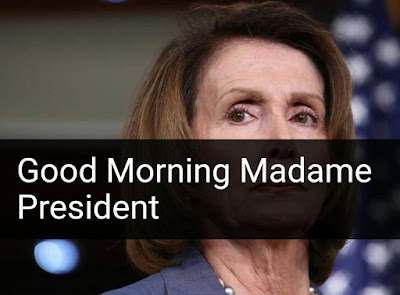