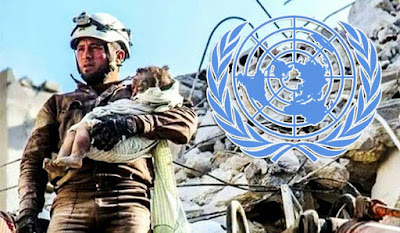 The Facts:Western corporate media has completely ignored a more than one-hour-long panel on the White Helmets at the United Nations on December 20 that details their involvement in organ harvesting and false flag terrorism.

Reflect On:Why have we not heard anything about this in the west? Why did mainstream media outlets who were present completely ignore the evidence of false flag terrorism and organ theft? They didn't even ask about it...
-


When I first watched the trailer for the Oscar-winning documentary The White Helmets, I cried. It paints a beautiful picture of saintlike, peaceful soldiers saving innocent civilians from the terror in Syria, with the song “When the Saints Go Marching In” playing in the background. It ignited a fire of compassion and empathy within me for the Syrians plagued by war. I knew I needed to watch the documentary and, more specifically, learn more about this heroic group. Yet to my surprise, I learned that this group isn’t quite as “heroic” as the documentary and North American mainstream media paints them to be. Perhaps the only reason this group deserved to win an Oscar was for their acting skills – not their humanitarian efforts. – Kalee Brown

-
The narrative above shared by one of our former writers is now holding true for a lot of people. It seems the more the ‘powers that be’ have presented the White Helmets as a humanitarian organization, the more they seem to have been exposed, and the massive propaganda campaign in the west that’s highlighted them as ‘heroes’ is finally coming to an end.

Entertainment is a huge distraction in the western world, which is why this topic received even more attention when Rogers Waters, the frontman for Pink Floyd, stopped his concert in 2017 in Barcelona to address the crowds about the propaganda being spread about what’s happening in Syria. He pointed out that The White Helmets are an organization that exists for the sole purpose of propaganda.  Collective Evolution reported on the corrupt nature of the White Helmets in 2017 and we’re now seeing it here again. The White Helmets have been caught staging events to create propaganda for media.

This idea was also emphasized by politicians overseas like Vladimir Putin, and in turn had some people calling this narrative ‘Russian Propaganda.’ With regards to the chemical gas attacks in Syria, Putin flat out said it was a “false flag” event and that “more are being prepared in Syria.”  An interesting report by Robert Fisk, a multi-award winning Middle East correspondent of The Independent and a journalist who has risked his life to visit the Syria clinic at the centre of a global crisis, also argued this, amount countless others.

Eva Bartlett, a Canadian journalist and human rights activist, divulged that the White Helmets’ video footage actually contains children that have been ‘recycled’ in different reports; so you can find a girl named Aya who turns up in a a report in say, August, and she turns up the next month in two different locations.

Bartlett has extensive experience in the Gaza Strip and Syria. Her writings can be found on her blog, In Gaza.

The latest revelation that’s been ignored by western mainstream media is the fact that the United Nations recently held a panel discussing, according to Bartlett, the “irrefutable documentation presented on the faux-rescue group’s involvement in criminal activities, which include organ theft, working with terrorists — including as snipers — staging fake rescues, thieving from civilians, and other non-rescuer behaviour.”

It turns out that the White Helmets aren’t the heroes we thought, but rather a strategic terrorist group that’s funded by the U.S. and other interested countries and parties.  In regards to the “recycled” children footage, you can read more about that in this 21st Century Wire article. They show numerous examples of the White Helmets posting the exact same photos of children, claiming they were taken on different dates.

The one-hour long panel on the White Helmets was held at the United Nations on December 20th, 2018, and yet nobody seems to have heard about it. Why? Because it’s not in the best interests of the deep state to tell you.

It’s important to understand the evidence as well, which connects mainstream media to western intelligence agencies and corporations. You can find links to that documentation and real examples from mainstream media journalists themselves in this article we recently published.

As Bartlett points out about the panel:
-


On the panel was one of corporate media’s favourite targets to smear, British journalist Vanessa Beeley, who gave a fact-based lecture on her years of research into the founding, funding and nefarious activities of the White Helmets, research which includes numerous visits to White Helmets centers, countless testimonies from Syrian civilians, and even an interview with a White Helmets leader in Dara’a al-Balad, Syria.


Maxim Grigoriev, the director of the Foundation for the Study of Democracy (a member of the UN’s Global Counter-Terrorism Research Network) spoke at length, detailing some of the over 100 eyewitnesses his foundation has conducted interviews with.


These include over 40 White Helmets members, 15 former terrorists, 50 people from areas where terrorists and WH operated, with another over 500 interviewed by survey in Aleppo and Daraa.

-
Among the testimonies presented, many of them provided details of organ harvesting, which is big business on the black market. A head of nursing in Aleppo was cited as seeing the body of his neighbour who had been taken by the White Helmets for treatment, she “lifted the sheet and saw a large wound cut from the throat to the stomach… I touched him with my hand and understood there were clearly no organs left.”

According to  a Syrian civilian, Omar al-Mustafa, “almost all people who worked in nearby White Helmets centers were al-Nusra fighters or were linked to them. I tried to join the White Helmets myself, but I was told that if I was not from al-Nusra, they could not employ me… I saw them (White Helmets) bring children who were alive, put them on the floor as if they had died in a chemical attack.”

The list goes on, and if you know anything or have done any research into organ harvesting, this is not a surprise. There are mountains of evidence corroborating these stories. Just like arms dealings and human trafficking, organ harvesting is right up there.

Syrian journalist Rafiq Lotef and Russian and Syrian Representatives to the UN, Ambassadors Vassily Nebenzia and Bashar al-Ja’afari, described these events in detail.

Below is a video of the full panel discussion. 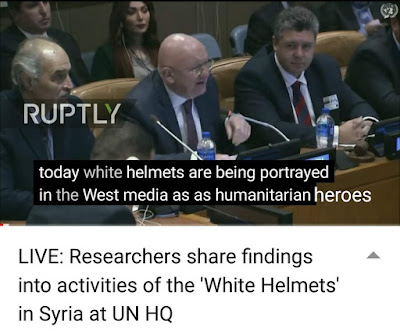 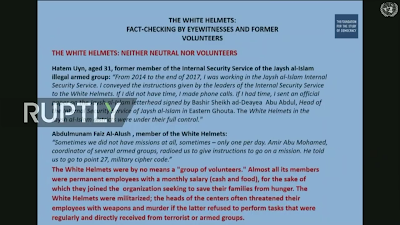 No Interest From Corporate Media

According to Bartlett, media at the panel didn’t even follow up on questions regarding organ theft and false flag terrorism, staged rescues, etc. Instead, they simply asked questions about other issues.

This is unbelievable, but not surprising, as this type of rhetoric is spouted as ‘fake news’ in the west by mainstream media organizations. CBS news was present, but again, didn’t have a single question to ask about anything that was presented.


Four days after the UN panel, to my knowledge, not a single corporate media outlet has covered the event and its critical contents. This is in spite of the fact that the Western corporate media has been happy to propagandize about the White Helmets for years, and to attack those of us who dare to present testimonies and evidence from on the ground in Syria which contradicts the official narrative.


Why haven’t the media written about the panel, or as per the corporate media norm, issued yet more smears against panellists? They haven’t because they are cornered, and while they can always try their standard juvenile character smears and libel, they cannot refute the facts, the countless testimonies which corroborate yet still more testimonies taken by independent journalists over the years.

-
Or as Ambassador Nebenzia said:
-


“We understand why White Helmets are being defended by Western capitals. They do not hide that they provided substantial financial support to this organization and instrumentalized it to pursue political goals under humanitarian cover. It’s logical to protect your asset.”

-
It doesn’t really matter, because more and more, Western corporate media and the propaganda they construct including the White Helmets are becoming exposed.

The deep state manufacturing events in order to justify western infiltration is nothing new. This has become a frequent strategy for them, and there is more than enough information to see it. The sad thing is that this information has been publicized for a long time, yet it goes hidden and untouched by the media. For example, when Syria elected president Shukri-al-Kuwaiti, he did not approve the Trans Arabian Pipeline, an American project intended to connect the oil fields of Saudi Arabia to the ports of Lebanon via Syria. In his book, Legacy of Ashes, CIA historian Tim Weiner recounts that in retaliation, the CIA engineered a coup, replacing al-Kuwaiti with the CIA’s handpicked dictator, a convicted swindler named Husni al-Za’im. Al-Za’im barely had time to dissolve parliament and approve the American pipeline before his countrymen deposed him, 14 weeks into his regime.

Thankfully, many people are starting to see through this narrative. The consciousness of the planet is shifting in all aspects regarding humanity, and politics is one of them. Never before have so many people ‘woken up’ to what’s really happening, and as a result, the deep state is pushing even harder to create propaganda and change the narrative. 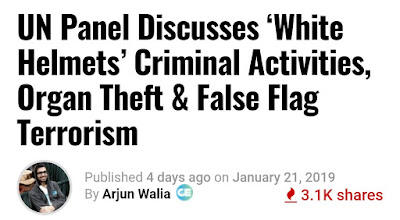