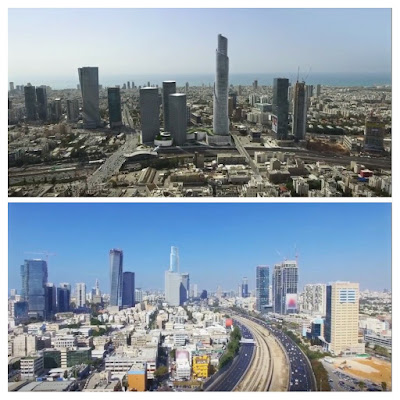 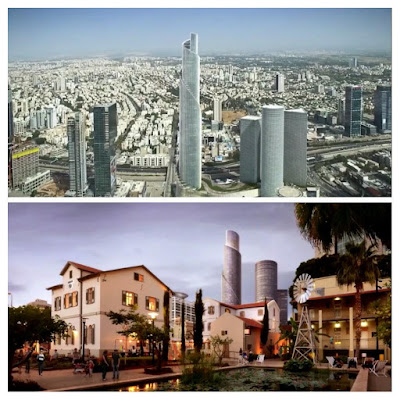 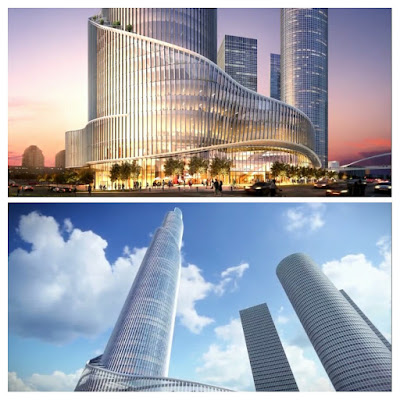 發展商的商標:
The logo of the developer: 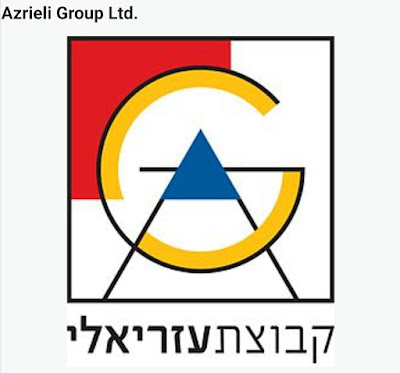 一圖勝千言，對我來說，上面的商標代表這些:
One pic tells a thousand words. The above logo means these to me: 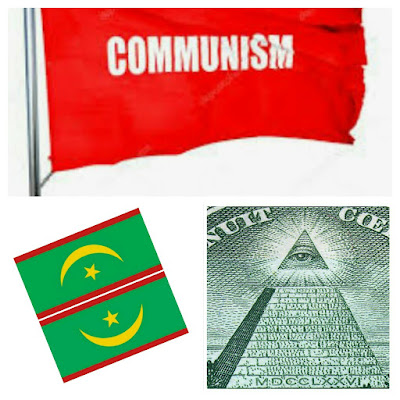 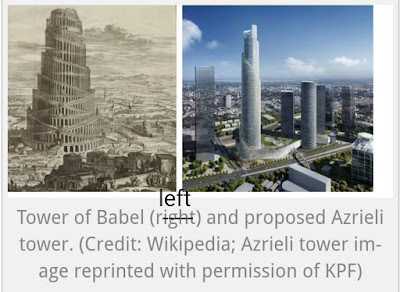 One of the largest real-estate developers in Israel revealed plans for the soon-to-be tallest building in Israel that looks surprisingly similar to images of what the Tower of Babel may have looked like. But a closer look reveals the new building may be much more, what one rabbi thinks could be a dry-run for building the Third Temple.

The Azrieli Group, an Israeli real estate and holding company, announced their plan to build Israel’s tallest building as an addition to their already impressive Azrieli Center Complex in Tel Aviv. Topping out at 91 stories and reaching 1,150 feet toward the heavens, it is estimated that the Spiral Tower will take six years to complete at an estimated cost of $666 million. The new tower will take its place next to the iconic circle, square and triangle towers that make up the Azrieli Complex. By building the Spiral Tower, the Azrieli Group will outdo itself as they built the current tallest building in Israel, The Azrieli Sarona Tower which stands 782 feet high with 53 floors, just two years ago.

The plans are ambitious, with around 150,000 square meters containing commercial space, offices, residences, and a hotel. Six underground parking levels, covering an area of 45,000 square meters, will be built at the base of the structure, in addition to a commercial floor connected directly to the light rail. The tower’s peak will include space for conferences and meetings, recreational space, and a 360-degree view of Tel Aviv and the surrounding area. it is predicted that approximately 100,000 people will pass through the center every day.

The unique design was produced by Kohn Pedersen Fox Associates (KPF), a New York-based architecture firm which is responsible for five of the 10 tallest skyscrapers in the world. According to the press release, the architects took their inspiration from nature as well as Jewish heritage.

“The tower was planned and developed in a unique geometric shape, never before seen in Israel, which captures the eye and the imagination. The main challenge for the initiators and architects was to create harmony between the three iconic towers that form Azrieli Center and the new tower, an impressive, one-of-a-kind structure which stands on its own. The tower’s design takes inspiration from the twists of a snail’s shell, attempting to imitate their natural form. The design also draws inspiration from ancient biblical scrolls and the way they unfurl upwards.”

More cynical critics of the design might draw a comparison between the elegant design presented by the developers and certain depictions of the Biblical Tower of Babel. Though the Biblical account contains no details other than it builders aspirations for it to reach great heights.

And they said, “Come, let us build us a city, and a tower with its top in the sky, to make a name for ourselves; else we shall be scattered all over the world.” Genesis 11:4


Traditional Jewish sources provide additional details. Midrash (homiletic teachings) described “an idol on the top holding a sword, so that it may appear as if it intended to war with God.” The Midrash also described a structure built on tall columns designed to protect the tower from another divine flood.

Some modern scholars have associated the Tower of Babel with known structures, notably the Etemenanki, a ziggurat dedicated to the Mesopotamian god Marduk built by Babylonian King Nabopolassar in 610 BCE. Indeed, the Spiral Tower Design closely resembles a ziggurat, an ancient structure from the Middle East built as a terraced compound of successively receding stories or levels. at the top of each ziggurat was a shrine. Also, similar to the Azrieli Towers,  each ziggurat was part of a larger complex that included a courtyard, storage rooms, bathrooms, and living quarters, around which a city was built.

Rabbi Yisrael Rosenberg is an author who has a powerful connection to the spiritual implications of construction. His daytime job is as a tour guide for the Western Wall tunnels.

“The main of the sin connected to the Tower of Babel was not in their action but in their intention. The bottom line is that the intent of the builders and the architects of the Azrieli tower is l’shem shamayim (in the name of heaven). The fact that they envisioned a Torah scroll while designing the building is remarkable. Even if it was just for beauty, beauty can be to praise God’s creation.”

Rosenberg noted that the builders of the Tower of Babel came together to challenge heaven, hence their punishment was to be divided and scattered.

“Tel Aviv needs high towers since it is becoming densely populated,” he said. “This is a Tikkun (fixing) for what happened after the Tower of Babel. It allows people to be together in Israel.”

He also noted that for the 2,000 years of exile, Jews excelled in many fields but were less represented in architecture and land development.

“Everything we learn about construction in Israel is just one step away from the Beit Hamikdash,” the rabbi said. “Just like Solomon’s Temple, the Third Temple will be with the agreement and blessings of every nation in the world and it will be the greatest construction project ever seen. We need to learn how to lead the world in this project.” 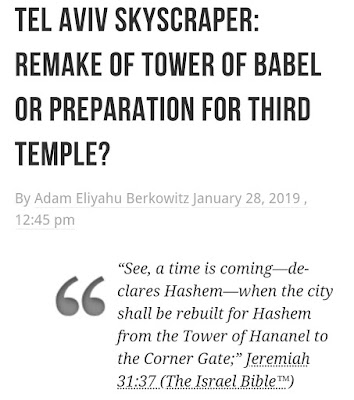