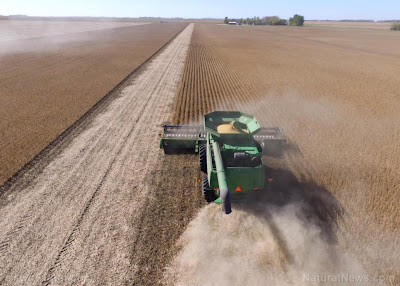 (Natural News) Natural News and other members of the independent media have been warning about the dangers of glyphosate – the primary ingredient in Roundup, the world’s most popular weed killer – for many years. Not so the Environmental Protection Agency (EPA) or any other American governmental authority. In fact, while country after country banned glyphosate or limited its use, the United States government continued to insist that it was safe, as long as certain levels were not exceeded.

Back in 2014, the United States Geological Survey (USGS) funded a study to assess just how widespread glyphosate and its by-product aminomethylphosphonic (AMPA) were in the environment.

Even though the study’s authors went to great lengths to insist that “glyphosate is no more than slightly toxic to birds, fish, and aquatic invertebrates; and exhibits relatively low oral and dermal acute toxicity to humans,” it nonetheless admitted that both glyphosate and AMPA “occur widely in the environment.”

Nothing to see here

The EPA and Monsanto, the company that produces Roundup, have a long and dishonorable history of collusion. For decades, the EPA was aware that glyphosate increased the risk of cancer, but for at least 35 years the agency protected Monsanto by continuing to hide the evidence.

Natural News previously reported:
Data has been released that Monsanto and the EPA knew that glyphosate causes cancer in mammals as early as 1981. In fact, studies conducted as early as the late 1970s documented cancer caused by glyphosate in lab animals, including, dogs, mice and rats.
Monsanto, with the EPA’s cooperation and complacency, intentionally and knowingly hid this information from investors, consumers and the public.

Uncovered EPA memos and internal correspondence from the early 1980s show a very different story. The same studies that Monsanto misrepresented to state that Roundup was a safe product, in fact state that glyphosate causes irreversible damage to the kidneys as well as hyperplasia in rats.

Hyperplasia is the increase of healthy cells in tissue or organs, and typically represents a precancerous condition.
The independent media was ridiculed for its insistence that glyphosate was dangerous, with the mainstream media – reliant on Monsanto’s advertising revenue – throwing its full weight behind the product and declaring it to be safe to animals and humans alike.

That all changed in 2015, when the World Health Organization’s International Agency for Research on Cancer (IARC) classified glyphosate as “probably carcinogenic [cancer-causing] to humans” after evaluating 1,000 studies which examined human exposure to glyphosate in the working environment – for example, farmers – as well as experimental studies which examined glyphosate’s cancer risk.

The IARC is universally respected and free of conflicts of interest. Its findings are based on independent scientific studies and “rigorous criteria and procedures.”

Suddenly, Americans sat up and took note of the dangers of glyphosate and the other chemical agents (adjuvants) which are added to it to increase its destructive power.

Hundreds of plaintiffs are taking Monsanto to court, claiming that exposure to glyphosate has caused them or their loved ones to develop cancer.

If only that 2014 USGS study that confirmed just how pervasive glyphosate was in the environment had taken it a step further and warned farmers and other people about its dangers.

Instead, the report stated:
Most observed concentrations of glyphosate were well below existing health benchmarks and levels of concern for humans or wildlife, and none exceeded the U.S.
Environmental Protection Agency’s Maximum Contaminant Level or the Canadian short-term or long-term freshwater aquatic life standards.
Thank goodness for the honorable scientists at the IARC who took the brave step of going against the mainstream and proclaiming that glyphosate is dangerous to human health. And we can only be grateful to the independent media for declaring the same thing, in the face of great ridicule.

Learn more about the dangers of Roundup at Glyphosate.news.