隨心：DARPA的新任務是用你的心跳找你
Follow Your Heart: Darpa’s Quest to Find You by Your Heartbeat
By Adam Rawnsley
November 18, 2011
Translation by Autumnson Blog 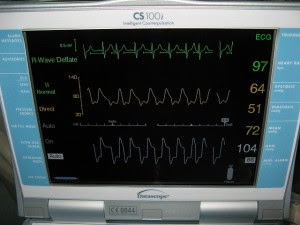 The U.S. military can see you breathing on the other side of that wall. It can even see your heartbeat racing while you crouch behind the door. But if you think running farther away or hiding in a crowd will make you invisible to the Defense Department’s sensors, you might be in for a surprise. The Pentagon’s geeks are looking to tweak their life-form finder so they can spot your tell-tale heart no matter what you do.
美國軍方可在那堵牆的另一邊看到你呼吸，而當你在門後蜷伏時它甚至可以看到你的心跳疾走。但如果你認為走得更遠或隱藏在人群中會使你在國防部的傳感器前看不見，你可能有驚奇。五角大樓的怪胎是正在尋求調整他們的生命形式尋找器，這樣他們就不管你做什麼，可發現你的告密心臟。
Darpa, the Pentagon’s mad-science shop, announced last week that it’s looking to improve on technologies that sniff out biometric signatures like heartbeats from behind walls. Dubbed “Biometrics-at-a-distance,” the program seeks to build sensors that can remotely identify humans from farther away and tell them apart in a crowd.
五角大樓的瘋狂科學店DARPA上週宣布它在尋求改善技術，以嗅出生物識別簽名例如來自牆壁背後的心跳。被稱為“在一個距離的生物識別技術，”，計劃尋求建造傳感器可遠程地從較遠識別人類，並在人群中告訴他們。
Seeing or “sensing” human life through walls can be a pretty helpful trick. For troops that have to clear houses in search of terrorists or insurgents, it’s always nice to know what’s on the other side of that door. Picking up “life-form readings” may sound like science fiction straight out of Star Trek, but the Defense Department has been able to do it for years now.
穿牆看到或“感到”人類生命可以是非常有用的一招，給要清理家居以搜尋恐怖分子或叛亂分子的部隊，它總是好的去知道門的另一側有什麽。取起“生命形式的讀數”可能聽起來像直出自“星空傳奇”的科幻小說，但國防部現在已能夠做到多年了。
In 2006, Darpa developed Radar Scope,which used radar waves to sense through walls and detect the movements associated with respiration. A year later, the Army invested in LifeReader, a system using Doppler radar to find heartbeats. More recently, the military’s been using devices like the AN/PPS-26 STTW (“Sense Through the Wall“) and TiaLinx’s Eagle scanner, which can sense the presence of humans and animals through walls.

Handy though these gadgets may be, Darpa wants to one-up them with some new and better capabilities.

First off, Darpa wants its biometric device to be able to work from farther away. Right now, it says the accuracy of most systems taps out at around eight meters. And while some see-through devices can see through up to eight inches of concrete, they don’t do as well in locations with more or thicker walls. So Darpa’s looking for the next system to push that range past 10 meters, particularly in cluttered urban areas.

Finding humans hiding in a particular room is nice, but being able to tell them apart is even better. Like your fingerprints, irises and even your veins, your heartbeat can be a unique biometric calling card to distinguish you in a crowd. Darpa’s hoping its sensor can capitalize on this by using electrocardiography — the analysis of the heart’s electrical activity — to identify and track up to 10 different individuals.

But don’t be too scared of Darpa’s heart hunter. There are plenty of non-terrifying applications that the Pentagon’s geek shop envisions for the device. For instance, being able to sniff out life signs at longer distances and behind thick concrete slabs could be very useful in disaster scenarios. In the aftermath of an earthquake, rescue workers could use Darpa’s longer-range biometric sensors to find survivors trapped under rubble.