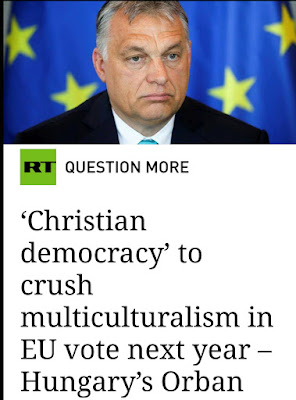 匈牙利總理奧班:明年歐盟選舉非自由主義的'基督徒民主'將粉碎多文化主義
‘Christian democracy’ to crush multiculturalism in EU vote next year – Hungary’s Orban
28 Jul, 2018
Illiberal “Christian democracy” will replace multiculturalism after the European Parliament vote in 2019, Hungarian Prime Minister Viktor Orban has predicted, adding that the EU elite have failed the people and should step down.
The European Parliamentary elections in May 2019 will decide the fate of the European “elite” and they’re “visibly nervous” about it, Orban told a crowd of ethnic Hungarians in the Romanian town of Baile Tusnad on Saturday.

It’s time for the current Western leadership of the EU to go, as it has failed to protect the bloc from immigration, he said.

“Their big goal is to transform Europe, to ship it into a post-Christian era and into an era when nations disappear – this process could be undermined in the European elections. And it is our elementary interest to stop this transformation,” the PM said.

The liberal values and multiculturalism promoted by Brussel will crumble in the face of what he called “Christian democracy.”

According to Orban, “Christian democracy is not liberal... It is illiberal, if you like.” This ideology rejects not only immigration and multiculturalism, but Communist values as well, he explained.

Next year’s vote will be “a big moment” that will see Europe “saying goodbye not simply to liberal democracy... but to the 1968 elite,” he said, referring to a wave of liberal protests in Europe and US that paved the way for the decline of conservative ideologies.

"There’s a general shift towards the right in the whole of Europe," the PM told his audience, adding that, in order for a shift to “illiberal democracy” to happen, the European elections must be focused on “one common theme – immigration." https://www.rt.com/news/434549-orban-eu-christian-democracy/
張貼者： Autumnson 於 下午4:39