In part 3 of this corrective history of the Syrian proxy war, we chart ISIS' rapid advance into central Syria and inroads into the Damascus suburbs, as well as Russian intervention and the resulting failure of US regime change plans. See Part 1 here and Part 2 here.
Part 3: The Myth of US 'Inaction' in Syria, by William Van Wagenen via The Libertarian Institute 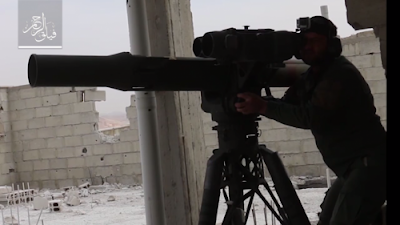 On May 20, 2015 ISIS conquered the city of Tadmur at the site of ancient Palmyra, famous for its Roman ruins, and which lies in Homs province on the road between Deir Ezzour and Damascus. CNN reported of the ISIS assault to take Palmyra that “After at least 100 Syrian soldiers died in fighting overnight, Syrian warplanes carried out airstrikes Thursday in and around Palmyra.”

Shortly after capturing the city, ISIS released video of its fighters throwing two allegedly gay men from the top of a building, and then stoning them. CBS News cited an eyewitness as claiming that "ISIS militants blared on loudspeakers for men to gather".

Then a black van pulled up outside the Wael Hotel, and Mallah and Salamah were brought out. The first to be thrown off was Mallah. He was tied to a chair so he couldn’t resist, then pushed over the side. He landed on his back, broken but still moving. A fighter shot him in the head. Next was Salameh. He landed on his head and died immediately. Still, fighters stoned his body, Omar said. The bodies were then hung up in Palmyra’s Freedom Square for two days, each with a placard on his chest: ‘He received the punishment for practicing the crime of Lot’s people.’”