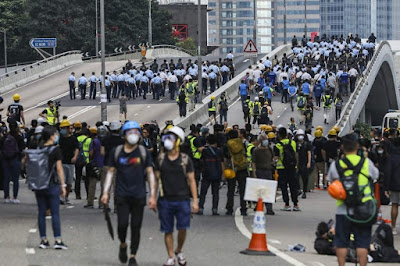 by Courtesy
Police Tactics and How To Defeat Them
The local, state and federal governments have unlimited tax dollars to use to control crowds at demonstrations and insurrections. We must develop ways to combat these technologies, and although we are in reality in a fight against technology, it would be naive to think we can use spears against these maniacs. Therefore, we need to find ways to eliminate police tactics. The following information are some common used tactics and best effective ways to beat them.
Riot Cop Gear and Equipment
To crush protests, police departments all over the world have invented countless methods. Some are new, others only adaptations of battle tactics from the ancient times. Just as importantly, new and much improved equipment has been issued to riot police squads, making them nearly unstoppable. On the right you can see how a regular American riot cop looked like at Seattle. In most European countries, similar equipment is used, although full body armor is not standard yet, therefore Plexiglas shields are used.
Much like a renaissance knight, a modern riot cop is wearing full body armor, heavy boots and a large helmet completely encasing the head and neck. He is practically invulnerable even to the hardest punches and kicks, as well as moderately protected against fire. Armed with a long baton and those killer boots, he can attack aggressively and efficiently.
What makes such a riot cop really effective, though, is constant radio communication. As you can see from the picture, each cop has two radio sets, one in the helmet and another for backup. This allows the riot police to coordinate their moves and sweep the streets with ease. If extra firepower is necessary, they can fire tear gas, rubber bullets or even deploy armored vehicles and water cannons.
Police Tactics and Their Defeat
Anyone with some knowledge of history can clearly see that most crowd control tactics are simply copied from ancient warfare. Riot police fight much like a Macedonian phalanx would back in 330 BC. There are adaptations, of course, but the basic concept is the same, meaning that similar countermeasures that had caused the demise of the phalanx as a military unit would have a similar effect if deployed nowadays against the police.
Most of the time, riot police are deployed in a long line formation, usually standing in front of important buildings or blocking streets. When these line formations are present, they are usually just one man deep, especially when they stand to protect property (see picture). These line formations only work when each officer is standing side by side to eachother. When dealing with narrow paths and small sidewalks, large obstacles (barricades) will split these line formations and cause their entire formation to fall apart.

When line formations have already formed, you can run your line into theirs.If they feel threatened, they can increase the distance between them and the protesters by firing tear gas, stun grenades and rubber bullets. Tear gas and pepper spray are also used to disperse crowds or at least soften them up prior to an attack. This where gas masks and shields come in. The police will not disperse any chemical agents unless they are wearing gas masks themselves. If they are wearing masks, and the Bloc is less than 20 feet away from the police formation, they will not fire tear gas cannisters because it may be damaging to the officers’ safety. They will however disperse pepper spray. To protect yourself from being directly hit with pepper spray, shields are a good idea. Click here for shield construction methods. When pepper spray is dispersed in an area, it can cause lung and throat difficulties to everyone surrounding it, even if they have not been directly sprayed. For this, a large cloth soaked in vinegar works great. Make sure that you carry plenty of water. When you are sprayed or gassed, pour lots of water over the exposed area. Gas masks are another alternative, yet are not always safe, being that they are illegal and can get you a nice conspiracy charge.
In attack, the line formation usually advances only after tear gas has been fired. On the move, policemen tend to march fairly slowly, not just because of the heavy armor but because they have to maintain the original formation at all costs. Only if the protesters are fleeing the scene will they sometimes try to chase them down.
First of all, it soon became apparent that no government could suppress large-scale protests just with the elite riot police. Their equipment was just too expensive and inevitably, regular police forces had to be called in as well. Of course, riot police was always tasked with guarding only the vital objectives while the regular police would normally just perform less important duty. Protesters would often take advantage of that and split themselves in two groups. One would attack the poorly defended positions by hurling rocks and firebombs. Since regular police could not sustain that for any longer period of time, the riot police would have to come to their aid. Then the second group of protesters would attack the now much weakened main objectives and possibly seize them.
If more aggressive approach was desired, one group of protesters would lead the police in a trap by making a quick assault and falling back immediately afterwards, as if fleeing the scene. The police would usually pursue them haphazardly, falling easy prey to a flanking attack of other protesters who would suddenly rush out from side streets.
Barricades
Barricades are a great tool in creating chaos in the streets. When line formations start to advance on the Bloc, or when vehicles are called in (like the armored tank in Seattle), barricades are a great way to stop them. Barricades can be created out of just about anything. In the past, the concrete has been torn from the ground and piled up in the streets. Construction sites have those neat little barricades that can be stolen at night time. Take one and add your own things to it: barbed wire, bricks, basically anything that is heavy. You can also liberate police barricades from the scene and pile them up. Cars can be wonderful barricades and can be easily set on fire. Once again, be creative. Its not that hard to make a wonderful barricade. …source
http://www.crookedbough.com/?p=2372