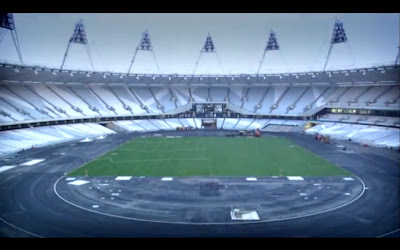 The security precautions being taken for the Olympics are not only gigantic in their extent, but seem to be increasing every day. It's the inflationary tendency within security advice that should concern us, not its temporary extent. When something shows signs of growing bigger and bigger, with no tendency to deflate, it's up to us to question the power these things are acquiring over our lives. The madness of the Olympics is one thing. We should worry about this madness becoming normal, and the security industry taking over our everyday lives.
奧運會採取的安全預防措施，不僅在其程度是巨大的，而且每天似乎在越加越多。安全建議內的膨脹趨勢應該引起我們的關注，而不是它的暫時程度。當一些事情顯示有越來越大的跡象，沒有緊縮的傾向，這是要靠我們質疑權力當局這些東西在侵佔我們的生活。奧運會的瘋狂是一件事，我們應該擔心這種瘋狂變得正常，而保安業在接管我們的日常生活。
I enjoyed Lord Coe's most recent statement about the security to be deployed. I thought it had real comic potential. He said, in case you missed it, that "there has to be proportionality here. You don't want people coming to London thinking they've walked into siege city, being filmed every 20 paces they take and being bundled off pavements. It's certainly not what you're going to get legacy tourism from. There is no appetite for risk."

Particularly amusing is Lord Coe's promise that people who come to London are not going to be filmed every 20 paces. This morning, taking a walk down Clapham High Street, I decided to count the cameras. It's 550 metres long, and this morning I counted 40 CCTV cameras, including ones performing the vital work of guarding the entrances to a Belgian moules restaurant, the worse of the two dry-cleaners, and a crap bar. I may have missed a few, but "being filmed every 20 paces" sounds about right to me.

Let's take a look at some of these "proportional" measures, and how they have grown in recent months. The number of security personnel within the venues is increasing from 10,000 to 23,700 – let us not be cynical, and suggest that the advice came from people keen to see the 100 metres final – and 12,000 extra police and 6,000 soldiers will be on the streets. A warship is to be deployed in the Thames – what against, the Spanish Armada? Surface-to-air missiles will be on standby.

Let me just write that again: surface-to-air missiles will be on standby. Well, I've been on holiday in some fairly unlikely places, including Khartoum in the middle of a civil war. I amused myself by driving up and down slowly outside the Presidential palace, where the bored military will salute you if you lower the window and make an ambassadorial gesture. But this is London. Warships? Surface-to-air missiles? An army of 42,000? Wellington only needed 68,000 at Waterloo. What kind of "proportionality" is being served here?

Of course, nobody knows what "proportionality" means until the threat emerges, and the defensive measures are shown to be grossly inadequate, or totally unnecessary. If somebody decides to explode a dirty bomb outside a crap Clapham bar tomorrow, making the area uninhabitable for years to come, then I don't think surface-to-air missiles will be much use. On the other hand, if the biggest threat turns out to be a nutty jihadi on a soap-box on the Common, the surface-to-air option starts to look like an expensive waste of time.

The security industry, which by now contains some of the largest employers in the world, and the military industry with which it overlaps, have this in common with other major industries. They constantly need to expand, to find new sources of income and enterprise. If they can persuade customers that they require new security measures, however exotic, they will have succeeded in exactly the same way that the fashion industry survives by persuading rich women that they absolutely must have an expensive new handbag.

And, as Lord Coe says, there is sadly no appetite for risk in this area. Not just at the Olympics – ever. Who wants to be the person who decides, just before a second 9/11, that we really don't want warships and surface-to-air missiles in the Thames? CCTV cameras are perfectly pointless, and have been shown to have absolutely no effect on crime figures after a year. Still, who wants to be the one shop in the street without a CCTV pointing impotently at the punters? Who wants to tell the security salesman, "You know, I really don't want a thuggish doorman standing outside my suburban shoe shop. I don't think it's necessary"?

It's easy to persuade people that security measures ought to be installed, however patently absurd, however much an invasion of personal freedom they may be. Suddenly, last year, it was necessary to film air passengers naked. Suddenly, we need more than twice as many security guards and a warship in the Thames because of a festival of minor sports in London. And afterwards, who wants to be the person to decide that the new security measures are no longer necessary, that the warship may be stood down?

Once they arrive, they are here to stay. The surface-to-air missiles will be needed for the Paralympics, the Commonwealth Games, the FA Cup Final, the Proms, the Baftas, May Week and the Henley Regatta. There will always be someone from the industry to argue that Soviet-style levels of control and bristling threats of defensive violence are necessary and "proportionate". It's for us to be brave, and remind ourselves that a healthy appetite for risk is part of living in a free country.