What's spreading faster than coronavirus in the US? Racist assaults and ignorant attacks against Asians 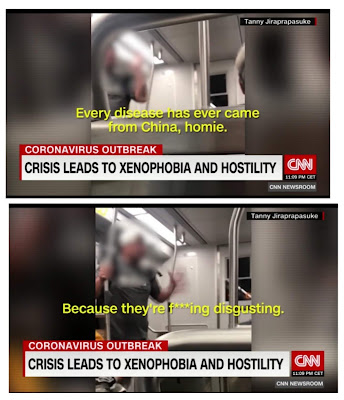 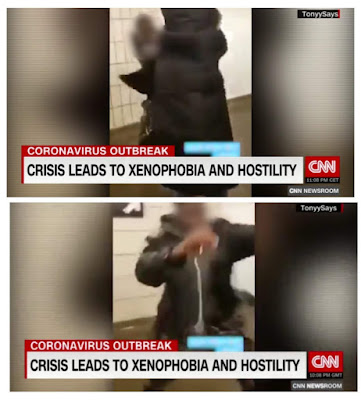 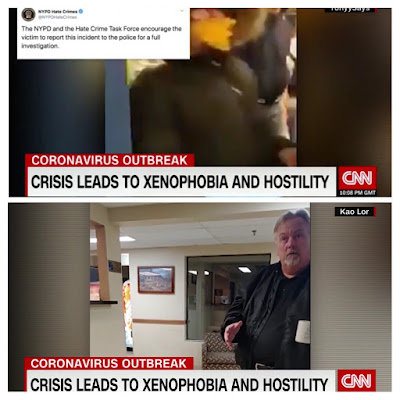 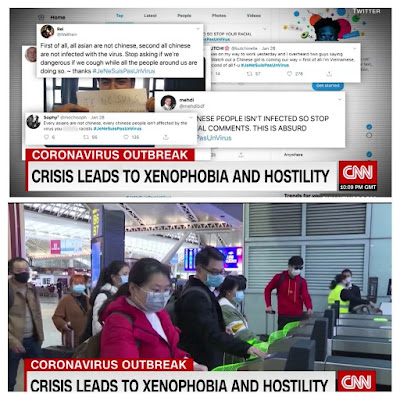 (CNN)In New York City, a man assaults a woman wearing a face mask, calling her a "diseased b****."
On a Los Angeles subway, a man proclaims Chinese people are filthy and says "every disease has ever came from China."
Rampant ignorance and misinformation about the novel coronavirus, experts say, has led to racist and xenophobic attacks against fellow Americans or anyone in the US who looks East Asian.


"With news of the coronavirus, we've seen an uptick in fear of people who look like this," said Rosalind Chou, a sociology professor at Georgia State University. "Real people are affected."
And the pain ranges from physical to verbal to financial.
"We, the Asian community, are under attack," said Tanny Jiraprapasuke, who was born and raised in Los Angeles.
Here's what's happening across the country, the facts about coronavirus, and what people can do if they witness attacks.

A tirade on an LA subway goes viral

Jiraprapasuke isn't even Chinese. But that didn't stop an irate passenger on the Los Angeles subway from singling her out and claiming Chinese people are putrid and responsible for all diseases.
Jiraprapasuke, who is Thai American, said the man ranted for about 10 minutes and was specifically looking and gesturing at her.


She started recording the tirade as the man lectured another passenger.
"Every disease has ever came from China, homie. Everything comes from China because they're f****** disgusting," the man said.
"They can be so smart and be like, 'Oh yeah, I developed this, I developed that.' But like yeah, you can't even wipe your a**."
Jiraprapasuke went online and discovered many other people of Asian descent have been harassed or attacked because of misguided coronavirus fears.
Many are using the global hashtag #JeNeSuisPasUnVirus -- French for "I am not a virus."


A woman gets attacked out of the blue

On the other side of the country, a woman at a New York subway station was assaulted by a stranger February 2.
The woman was wearing a face mask -- something many East Asians have done long before the coronavirus outbreak, including for protection from pollution.
One witness said she heard a man call the woman, who appeared Asian, a "diseased b****."


"To which she responded, 'Yeah, yeah, OK go away,'" the witness wrote in a statement to CNN.
"I started getting my phone out after I saw this interaction, but in the process, the man hit the woman on the head."
The witness, who did not want to be identified to protect her privacy, said she started filming shortly after the man hit the woman on the head. The video then shows the woman chasing after the man, who turned around and attacked her.
The New York Police Department is asking "the victim to report this incident to the police for a full investigation."
The witness said although the attack was a "terrifying" situation, "I believe that this incident has immense potential in opening up the discussion of Asian American-directed racial tension that has been caused by the" novel coronavirus.
"The sad trend that I've observed about racially directed hate is that almost all of (it) stems from fearful ignorance," she wrote.
"Racial tensions are indeed escalating, and we now have significant reason to take agency in acting."

Kao Lor and his uncle Lee Lor were traveling through Indiana when they tried to get a room at a Super 8 Motel in the city of Plymouth.
It didn't work. The two relatives, who are of Hmong descent, quickly faced extra scrutiny.
Kao Lor said an employee asked whether he was Chinese. Lor began recording the encounter.
"If you're from China, I need to know," the employee said.


"Because why?" Lor asked.
"Because of the coronavirus going around," he replied. "And anyone from China, I am told, has to be picked up and quarantined for two weeks."
That's not accurate. It's US citizens who have recently returned from China's Hubei province who must be quarantined for up to two weeks upon their return to the United States.
When CNN asked the motel for comment, an employee provided a statement.
"The views and what the employee said is not the view and policy of Super 8 by Wyndham Plymouth," the statement said. "Management is handling the employee involved. We are deeply saddened and embarrassed by the action of our employee."
Super 8 wasn't the only hotel that harassed the Lors.
Kao Lor went to a nearby Days Inn and asked an employee on video if Asians are not allowed. The employee appears to say no, Asians aren't allowed.
Wyndham Hotels, which franchises both the Days Inn and Super 8 brands, sent a statement to CNN.
"We're deeply troubled by these incidents as they're not reflective of our values or our expectations of franchisees," the statement read. "While these locations are individually owned and operated, it's important to note that the 'corporate policy' referenced in the video does not exist." 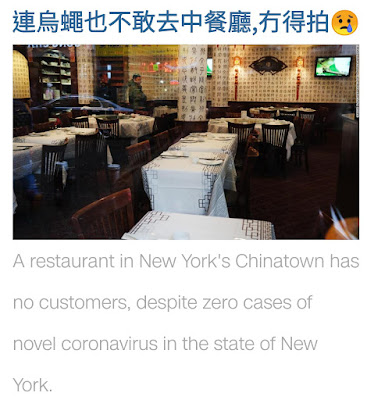 Sometimes the most devastating hits are financial. At many Chinese restaurants, income has been decimated.
"On a normal day, we'd have around 100 tables a day," said David Zheng, an employee at New Shanghai Deluxe restaurant in New York's Chinatown.
But now, "for a full day of business, we'd get only 20 to 30 tables."
Owner Rose Wu says New Shanghai Deluxe has served the city for 19 years. Now it's suffering from a 70% to 80% loss of business.
"We had table reservations from customers a couple months in advance," but many have canceled, she said.
"A customer called and said, 'Mainland China has this disease. We are not going to come out anymore,'" Wu said.
"No one in my restaurant has this disease. No one in Chinatown has this disease."
Indeed, no one in the entire state of New York has been diagnosed with novel coronavirus.

Why are some fears misguided?

While the novel coronavirus has infected more than 75,000 people and killed over 2,100 worldwide, it's caused far fewer deaths than the flu.
Globally, an estimated 290,000 to 650,000 people die from the flu each year, the World Health Organization says.
In the United States alone, an estimated 12,000 people have died from the illness so far this flu season, which started September 29, the US Centers for Disease Control and Prevention said.