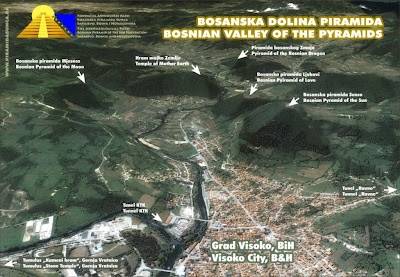 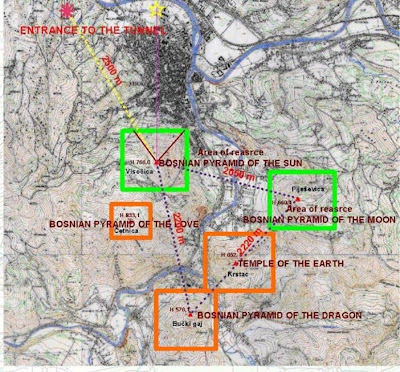 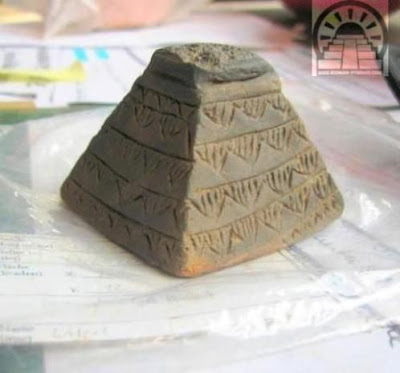 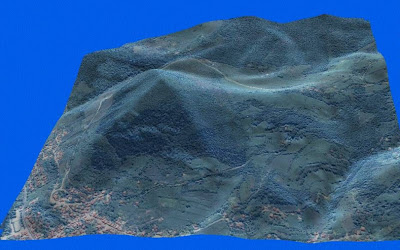 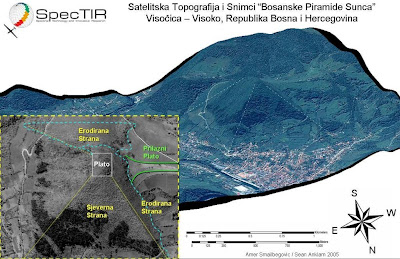 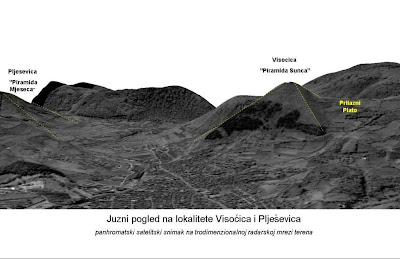 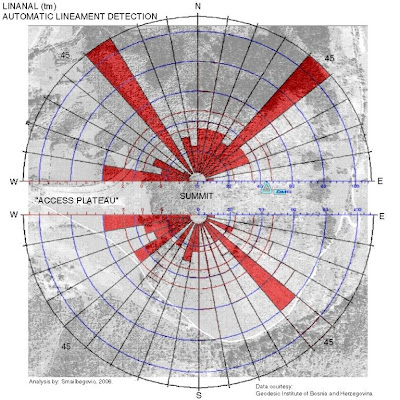 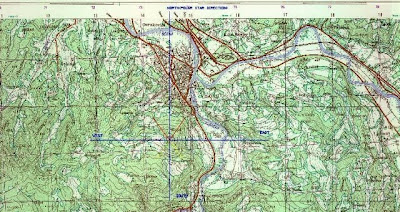 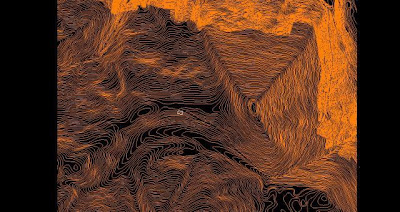 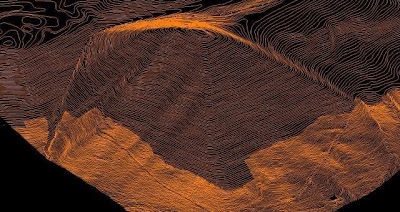 Aerial view of the Bosnian Pyramid of the Sun, the largest pyramidal structure in the world. With it's height of 220 meters it is higher than Great Pyramid of Egypt (147 m).
鳥瞰波斯尼亞太陽金字塔，是世界上最大的金字塔結構，它的高度為220米，高過埃及大金字塔（147米）。
Bosnian Pyramid
波斯尼亞金字塔
西元2009年08月30日

波斯尼亞金字塔下發現迷宮LABYRINTH DISCOVERED UNDER THE BOSNIAN PYRAMIDS
Written by Dr. sci. Sam Semir Osmanagich
Friday, 18 December 2009
Dr. sci. Sam Semir Osmanagich Founder of the “Archaeological Park: Bosnian Pyramid of the Sun” Foundation,
Foreign Member of the Russian Academy of Natural Sciences
俄羅斯自然科學院的外籍院士
I've seen and investigated thousands of pyramids all over the world: from Peru and Bolivia, Guatemala and El Salvador, Honduras, Mexico and Belize, Canary Islands and Mauritius, China and Egypt. Ancient people were aware of the concept of the pyramid construction everywhere. In most cases triangular pyramid faces match the cardinal points or summer solstice. In some cases inner passageways and chambers exist within these structures. Sometimes, sacral geometry and careful planning is obvious at the pyramid sites. Occasionally, underground tunnels connect the pyramids.
我見過和調查過數以千計世界各地的金字塔：從秘魯和玻利維亞，危地馬拉和薩爾瓦多，洪都拉斯，墨西哥和伯利茲，加那利群島和毛里求斯，中國和埃及，古代人都覺察到隨處可見的金字塔建築概念。在大多數情況下三角形金字塔的面匹配 (羅盤上的)方位基點或夏至，在一些情況下這些結構存在有內部通道和房間。有時，金字塔位置存有宗教典儀的幾何和審慎規劃是明顯不過的，間中金字塔由地下隧道連接。
All these elements are present in the case of the Bosnian Valley of the Pyramids in Visoko, Bosnia-Herzegovina. At the same time, this pyramidal complex in Bosnia is most mysterious and most exciting archaeological project in the world.
所有這些因素都存在在波斯尼亞維索科的金字塔谷過案內，同時，這波斯尼亞的複式金字塔是這世界上最神秘，最令人興奮的考古項目。
After I discovered the Bosnian Pyramid of the Sun and Bosnian Pyramid of the Moon in spring of 2005, I visited, together with the local children, what they called a "Ravne cave", couple of km away. Narrow entrance was followed by hundred meters passageway which was only one meter high. When I saw regular semi-circled ceilings I knew that it wasn't of natural origin.
在2005年春天當我發現了波斯尼亞的太陽金字塔和波斯尼亞月亮金字塔之後，我與當地的孩子們訪問一個幾公里外他們稱為“拉夫內洞穴”，狹窄的入口內跟着是只有一米高的幾百米通道。當我看到整齊的半盤旋天花板，我知道這不是自然產生的。
Soon after, in 2006 our teams started the cleaning process in the underground tunnels. Four archaeological seasons later (2006-2009) over 500 tons of the material (dirt, sand, pebbles, stones) is taken out from the underground tunnels. We still have a lot of questions, but some answers can be produced as well.
These are the facts so far:
•- Approximately 350 meters of existing underground tunnels have been cleared and secured by the wooden support;

•- Choice was made to follow the tunnel that lead in the direction of the Bosnian Pyramid of the Sun (South East-North West direction);

•- All side tunnels are sealed off with the fill in material and drywalls that are made from the rounded stones from the river beds;

•- Tunnel labyrinth was made in conglomerate; huge quantities of material (pebbles different granulation, sand) were taken out and most probably used to produce the concrete blocks needed to coat the sides of the Bosnian Pyramid of the Sun;

•- Number of sandstone blocks, different in size, have been discovered. Some of them have a peculiar shape and surface that looked shaped. They are all located on the top of clay and marl (natural floor) and all of them were covered by the conglomerate. Their weight is in the range from 1 - 8 tons. Conclusion: they were brought or made at this location before the conglomerate was formed.

•- According to the dowsers from several countries, sandstone megaliths are located over the underground water flows.

•- Some of the megaliths have the carved symbols on the surface.
•- Five radiocarbon dating have been performed in a period 2007-2009. (1) Piece of wood was discovered 50 cm deep in the conglomerate wall and 80 cm above the megalith. According to the Lab from the Christian-Albrechts University in Kiel, Germany and Sylesian University of Technology from Gliwice, Poland the age of the organic material is over 32.000 years. (2) Stalagmite was formed between ceiling and one collapsed section in side tunnel. According to the Gliwice Lab age is 5.080 years. (3) Age for the stalactite, also found in one side tunnel, as per the same Lab, is 3.560 years. (4) One piece of burned organic material is 3.090 years old, according to the University of Upsala (Sweden). (5) Another piece of discovered burned organic material is 4.610 years old as per Gliwice Lab.
So far, the following possible conclusions could be drawn about the cultural layers:
1."Megalithic culture" - Multi-ton sandstone blocks were brought to the open area more than 32.000 years ago by some unknown megalithic culture. Purpose of the megaliths is unknown, but there is a possibility that they were located the underground water flows (potent energy spots). That could subscribe them a ceremonial properties.
2."Tunnel builders" are most probably pyramid builders as well. They extracted hundred of thousands of stone material in order to make a huge underground labyrinth. But, there was no waste. Material was used as a component for the concrete blocks (clay was used as a binding material). Age of the tunnel builders: more than 5.080 years - less than 32.000 years (actually, much less than 32.000 years, because time was needed for conglomerate to form from the floods and conglomerate sedimentation)
3."Secret holders" - culture who knew for the tunnels and pyramids and who wanted to hide them for some reason. They carefully cleaned the tunnels from the artifacts, tools, bones and sealed all of them off bringing enormous quantities of the fill in material from the rivers. Age: more than 3.090 years - much less than 32.000 years.
4."Innocent users" - human societies older than advanced cultures that we know (Ancient Greek and Ancient Roman) but less than the pyramid builders. They were using some sections of the tunnel close to the entrance. Age: 3.090 years - 4.610 years.
Main questions still remain open:

• Who built the most-extensive underground tunnel network in pre-historical times?

• What was the purpose of the labyrinth?

• Why was the labyrinth sealed off?

• Who and why brought the megaliths in the area?

• When the symbols were carved on the megaliths?

The beauty of the new discoveries and magic of the archaeology is what we have in Bosnia. For the decades to come.
http://www.piramidasunca.ba/en/index.php/LABYRINTH-DISCOVERED-UNDER-THE-BOSNIAN-PYRAMIDS.html
http://www.abovetopsecret.com/forum/thread530205/pg1
波斯尼亞大型歐洲金字塔被發現