聖誕奇蹟的母親和嬰兒 抑或祇是生產藥物的副作用？
Christmas miracle mom and baby or just side effects of labor drugs?
January 2, 8:13 AMPregnancy Health Examiner
While there is no doubt, the blessings this family feels for having each other during the holiday season. No father should watch his wife die during childbirth and hold his stillborn son on Christmas Eve. Only to receive the wonderful miracle of having his wife and son brought back to life. However, there are some facts most mainstream media may be missing (or not revealing) to the public about this event. Here are just a few facts about maternal medicine in the United States:

The U.S.A. ranks 14th among developed nations for its maternal mortality ratio, the ratio of maternal deaths per 100,000 live births, meaning 13 other countries lose less mothers within 6 weeks of childbirth than the US does per year
American women who elect epidurals are FOUR times as likely to have cesarean sections
In 2006, the United States had the second worst newborn death rate in the world
The United States currently ranks 41st for maternal and infant mortatilty rate
Of the 4.3 million babies born annually in the U.S., 5% represent natural childbirth
So what happened to Tracey Hermanstorfer to go into cardiac arrest. Here is a little history about her:

Her first two births were unmedicated, meaning she used no pitocin and no epidural
Her water broke at 33 weeks gestation this time around
The last thing she remembers is the catheter being inserted
Whenever a mother receives pitocin, a synthetic form of oxytocin which.....

http://www.examiner.com/x-29454-Pregnancy-Health-Examiner~y2010m1d2-Christmas-miracle-mom-and-baby-or-just-hospital-procedures-gone-wrong
聖誕奇跡：母子產時雙雙死亡 繼而復活
Christmas miracle: The mother and baby who BOTH died during labour... then came back to life
By Richard Luscombe
Last updated at 8:01 PM on 30th December 2009
A father is claiming a Christmas miracle after his wife and newborn baby apparently came back from the dead.
Mike Hermanstorfer told how his wife Tracy went into cardiac arrest and stopped breathing just after being wheeled into a hospital delivery room on Christmas Eve.
Mike述說他妻子Tracy在聖誕節前夕用輪車推到醫院產房後，如何心臟停止跳動和停止呼吸。
Doctors performed an emergency caesarean section to try to save the baby’s life but then had to give Mr Hermanstorfer the heartbreaking news that his son had not survived either.
醫生進行緊急剖腹生產，試圖挽救嬰兒的生命，但之後卻要給Mike令人心碎的消息，他的兒子也存活不了。 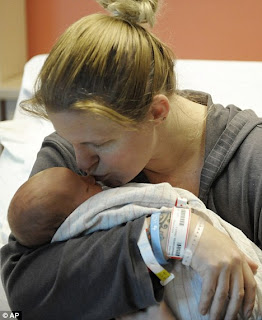 Unexplained: Mike,Tracey and Coltyn Hermanstorfer with Dr Stephanie Martin, who revived the mother she thought was

But as the sobbing father held his tiny son in his hands, he felt the boy slowly begin to move.
And at the same time Mrs Hermanstorfer, 33, began to breathe again.
但是當正在抽泣的父親用手抱實他的小兒子，他感到那男孩開始慢慢移動；和同時33歲的太太開始重新呼吸。
Her husband said: ‘My legs went out from under me. I had everything in the world taken from me, and then suddenly everything given to me. It was the hand of God.’
Doctors at Memorial Hospital in Colorado Springs, Colorado, said there was no logical explanation for the sudden recovery of the mother or her baby.
Dr Stephanie Martin, a maternal foetal medicine specialist, said: ‘She was dead. She had no heartbeat, no breathing, no blood pressure. She was as grey as her sweat suit and there were no signs of life. The baby was basically limp, with a very slow heart rate.
‘We did a thorough evaluation and can’t find anything that explains why this happened.’
Mr Hermanstorfer, 37, said: ‘We are both believers but this right here, even to a non-believer, you explain to me how this happened. There is no other explanation. Half of my family was lying right there in front of me in my hands, there’s no other way to say it, but dead.’
Mr Hermanstorfer said his wife had begun to feel sleepy as she was being prepared for the delivery.
‘She literally stopped breathing and her heart stopped. I was holding her hand when we realised she was gone,’ he said. ‘I lost all feeling. Once her heartbeat stopped, I felt like mine did too.’
Doctors and nurses began CPR in an attempt to restart her heart, but Mr Hermanstorfer recalls a doctor telling him: ‘We have been unable to revive her and we’re going to take your son out.' 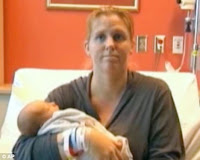 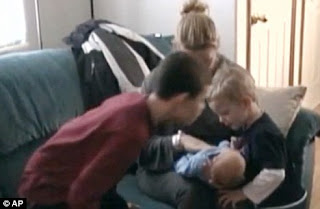 Glad to be here: The rest of the Hermanstorfer family meet their new brother


They began a caesarean section to remove the baby – and did not use anaesthetic on the assumption that the mother was dead.
After the caesarean, some of the medical team stayed with Mrs Hermanstorfer to continue efforts to resuscitate her, while other doctors began massaging the baby, named Coltyn, as he lay in his father’s arms in what they thought was a vain hope of reviving him.
‘They handed him to me, he was absolutely lifeless,’ Mr Hermanstorfer said. ‘But then they actually got him started right there in my hands. That’s a feeling like no other. Life actually began in the palm of my hands.’
Dr Martin said delivering the baby could have relieved the mother’s body of the stress of labour or unblocked previously clogged blood flow to the rest of her body. Mrs Hermanstorfer, whose heart was said to have stopped for about four minutes, said she recalled nothing of the incident.
She plans to tell Coltyn about his traumatic birth when he is old enough to understand.
‘I’ll tell him everything. That he had a tough time coming into this world, that he’s my miracle baby,’ she said.
Christmas Miracle: Mom and Baby Die, Then Revive
http://www.youtube.com/watch?v=zhXyRheuRWk&feature=player_embedded
http://www.dailymail.co.uk/news/worldnews/article-1239334/Mothers-breathing-stops-heart-fails--just-long-birth.html