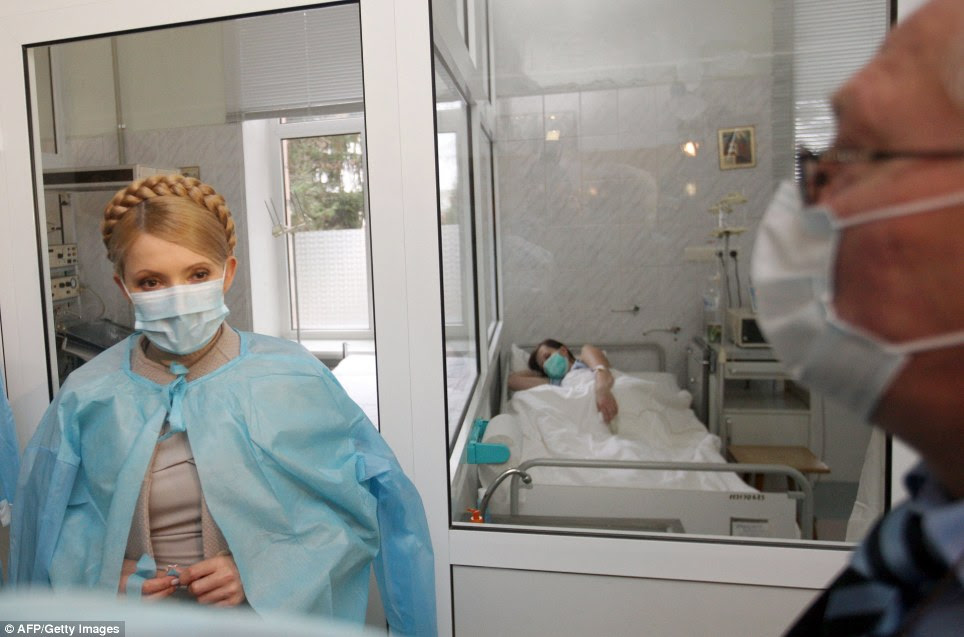 British scientists are examining the strain of swine flu behind a deadly Ukrainian outbreak to see if the virus has mutated.
A total of 189 people have died and more than one million have been infected in the country.
Some doctors have likened the symptoms to those seen in many of the victims of the Spanish flu which caused millions of deaths world-wide after the World War One.
An unnamed doctor in western Ukraine told of the alarming effects of the virus.
He said: 'We have carried out post mortems on two victims and found their lungs are as black as charcoal.

'They look like they have been burned. It's terrifying.'
Neighbouring Poland has called on the EU to take action, fearing the mystery virus may spread westwards.
Prime Minister Donald Tusk has written to European Commission President Jose Manuel Barroso and the Swedish Prime Minister, Fredrik Reinfeldt, who holds the EU presidency.
The letter said: 'The character of this threat demands that rapid action be undertaken at the European Union level.'
Russia, Slovakia, Poland, Hungary and Romania have already launched health checks on Ukrainians entering their territory.
Slovakia has closed two of five border crossings.

Ukrainian President Viktor Yushchenko has called in the World Health Organisation.
A team of specialists are carrying out tests in Kiev and Lviv in an effort to identify the virus.
President Yushchenko said: 'People are dying. The epidemic is killing doctors. This is absolutely inconceivable in the 21st Century.'
In a TV interview, the President added: 'Unlike similar epidemics in other countries, three causes of serious viral infections came together simultaneously in Ukraine: two seasonal flus and the Californian flu.
'Virologists conclude that this combination of infections may produce an even more aggressive new virus as a result of mutation.'
Four men and one woman have died from the flu in Lviv, said emergency hospital chief doctor Myron Borysevych.
Two of the dead patients were in the 22-35 age group, with two others over 60.
He diagnosed the disease as viral pneumonia.
'We have sent the analyses to Kiev. We don't believe it's H1N1 swine flu. Neither do we know what kind of pneumonia it is.'
Universities, schools and nurseries have been closed, public meetings have been banned and theatres shut.
The virus from the Ukraine is being tested at the Medical Research council labs in Mill Hill North London .
A spokesman said: 'We do not have a time scale for the results of the tests, although some preliminary results have been obtained. I cannot tell you what they are.
'We did not have enough of the virus samples so we will have to grow some more before we can come to a conclusive decision about its nature.'