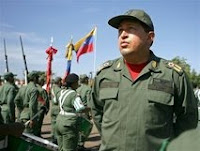 Chavez accused Colombia of preparing what he called a "false positive" operation, saying on Monday that it's feasible the neighboring country could build a makeshift camp in a remote location, then plant corpses and guns to make it look like a rebel camp had been discovered.

Colombian officials have said that leftist rebel commanders from their country are taking refuge in Venezuela. Chavez says that the officials are falsely trying to portray him as being in cahoots with the Revolutionary Armed Forces of Colombia, or FARC, which Colombia has been battling for decades.

"The verbal war against Venezuela began weeks ago, saying that we have I don't know how many guerrilla chiefs hidden here ... that in Venezuela there are rebel camps protected by the Venezuelan government, which is absolutely false," Chavez told troops during a televised speech in the western border state of Zulia.

"We have evidence that the Colombian government, instructed and supported, or rather directed by the United States, is preparing a 'false positive,'" Chavez said, without elaborating.

He said he believes Colombia could "kill people — I don't know who or how many — bring them to a mountain in Venezuelan territory, build some huts, an improvised camp, put some rifles there ... and say 'There it is, the guerrilla camp in Venezuela.'"

Chavez noted that some Colombian troops have previously been accused of killing Colombian civilians and then presenting them as guerrillas slain in combat to inflate rebel body counts.

Last year, Colombian troops raided a FARC camp inside Ecuador, killing 25 people including a FARC commander. That attack triggered sharp tensions with Ecuador and Venezuela, which said they would not tolerate any such cross-border strikes.

Chavez's accusations are the latest in a protracted diplomatic conflict with Colombia that has led to a sharp drop in trade this year and has prompted the Venezuelan leader to warn of a possible armed conflict.