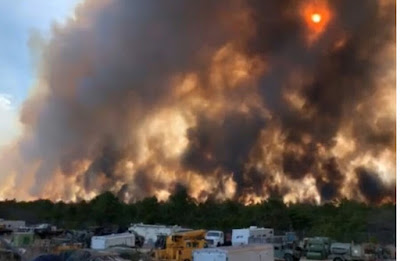 A major fire in the Penn State Forest in Burlington County, New Jersey has burned 1,000 acres so far and is zero percent contained.  Smoke from the fire has wafted north to Freehold and may soon reach New York City.

New Jersey Forest Fire Service crews are conducting a large operation in and around Route 72 west of Barnegat in order to contain the spread of the fire — which is moving north and could encompass thousands of acres before it’s placed under control, authorities fear.


The map below shows the location:
The New Jersey Forest Service has deployed its firefighting trucks and personnel, working side by side with local firefighters.
Most folks do not associate the word "forest" with "New Jersey" but the southern and central parts of the state have beautiful forests.
Significant rainfall is forecast for much of New Jersey late Saturday night-into-Sunday, which may help firefighters contain the blaze.