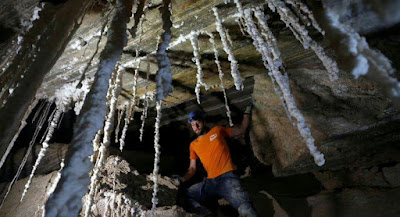 In a satisfying nod to the Bible, the world record for longest salt cave has been claimed by an enormous underground system near Mount Sodom on the Dead Sea, where Lot’s wife was transformed in the Old Testament.


The record has gone to Malham Cave following a recent survey by some 80 volunteers from nine countries who put in 1,500 work days to survey and plot the cave system.
The 10km (6-mile)-long labyrinth of underground caverns and passages overlooks the Dead Sea and is believed to be near the location where Lot's wife was turned to a pillar of salt for defying angels' instructions and looking back at the destruction of Sodom and Gomorrah, according to the Bible.
© REUTERS / Nir Elias
The salt cave complex, replete with glimmering, salty stalagmites and stalactites, contains at least a hundred different chambers, the longest of which extends for 5,685 meters.
© REUTERS / Nir Elias
Salt caves are rare geological features and typically do not extend longer than a mile. The previous record holder, was the the Cave of the Three Nudes (Namakdan), a 6,850 metre (4 mile)-long salt cave in Iran.
© REUTERS / Nir Elias
“Mapping Malham cave took hard work,” Efraim Cohen, a member of HU’s research team, told the Jerusalem Post.
“We worked 10-hour days underground, crawling through icy salt channels, narrowly avoiding salt stalactites and jaw-dropping salt crystals. Down there it felt like another planet.”
© REUTERS / Nir Elias
Radiocarbon dating techniques place wood fragments found inside the cave as being some 7,000 years old, giving a rough idea of when the cave itself formed.
https://www.rt.com/news/454990-longest-salt-cave-lots-wife/