“To the Gershonites of the levitical clans: From the half-tribe of Menashe, Golan in Bashan—the city of refuge for manslayers—with its pastures, and Beeshterah with its pastures—2 towns.” Joshua 21:27 (The Israel Bible™) 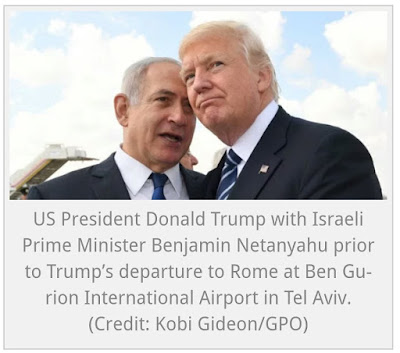 To paraphrase Israeli Prime Minister Benjamin Netanyahu, once again President Trump showed that the American people stand behind Israel by becoming the first world leader to officially recognize Israeli sovereignty on the Golan. And the timing of his act, coming while Hamas fired rockets at Israeli houses, could not possibly be more poignant.

On Monday, Trump
Last Thursday, on the Jewish holiday of Purim, Trump announced his intentions in a tweet. 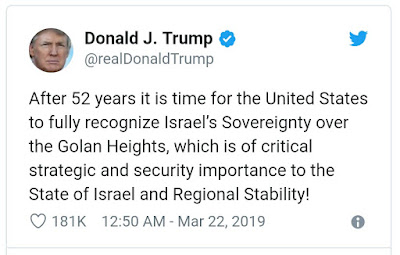 Netanyahu was in Washington for the  American Israel Public Affairs Committee but decided to cut short his visit when a Hamas rocket destroyed a house in central Israel, injuring the occupants. While the IDF responded to the attack with airstrikes and Hamas continued to fire rockets at Israeli communities, Netanyahu and Trump held a joint press conference in the White House Monday afternoon which was reported in detail by Israel National News.

“At this moment the American embassy stands proudly in Jerusalem, the capital the Jewish have established,’ Trump said to the media. “They wanted the embassy for many, many years, for many decades, and frankly, through many presidents. And we got it done.”
“We will confront the poison of anti-Semitism through our words, and maybe even more importantly, our actions. In the last century, humanity witnessed the horrific consequences of anti-Semitism and a world without a Jewish homeland. In the wake of those unthinkable horrors, the Jewish people built a mighty nation in the holy land, something very powerful, something very special and important,” Trump continued. “There can be no better example of greatness than what Israel has done starting from such a small speck of sand. Israel is an inspiration, a trusted ally, and a cherished friend. The United States will always stand by its side.”
Netanyahu was equally as complimentary, describing the growing relationship between the U.S. and Israel.
“You have shown consistently, incredible support for Israel, for our right to self-defense. When we exercise that self-defense you have never flinched. You have always been there, including today, and I thank you,” Netanyahu said.
“Over the years, Israel has been blessed to have many friends who sat in the oval office. But Israel has never had a better friend than you. You showed this time and again. You showed this when you withdrew from the disastrous nuclear deal with Iran … You said it you did it.”
“You showed it again when you restored sanctions against a genocidal regime that seeks to destroy the one and only Jewish State … You said it, and you did it.”
“You showed that when you recognized Jerusalem as Israel’s capital and moved the American embassy there … You said it. You did it.”
“And you have shown it once again today, Mr. President, with your official proclamation recognizing Israel’s sovereignty on the Golan Heights.”
In a powerful detour from political platitudes, the Israeli prime minister waxed Biblical, comparing the American president to Persian King Cyrus.
“In the long sweep of Jewish history there have been a handful of proclamations by non-Jewish leaders on behalf of our people in our land: Cyrus the Great, the great Persian King, Lord Balfour, President Harry S. Truman, and President Donald J. Trump.”
“And you, Mr. President, you’ve done it not once, but twice with your bold proclamation on Jerusalem, and your bold proclamation on the Golan.,” he said.
“On behalf of the people of Israel, thank you President Trump. Thank you for your leadership, thank you for your friendship, and thank you for all you have done to make the alliance between America and Israel stronger and greater than ever. Thank you, Mr. President.”

The Israeli Golan Heights comprise approximately 440 square miles. In addition to its strategic military importance, the Golan Heights is an important water resource, supplying 15 percent of Israel’s water. There are approximately 20,000 Israelis living in the Golan. An additional 20,000 residents, mostly Druze, live in the region.
Israel suffered from artillery attacks targeting civilian settlements in the Galilee region for years along with Syrian-aided attacks by the Palestinian Liberation Organization (PLO). The decision to conquer the Golan came after Syria began instituting a plan to divert most of the water flowing into the Sea of Galilee, denying Israel a major water source in contravention of international agreements. Israel conquered the Golan in the 1967 Six-Day War. During the Yom Kippur War in 1973, Syrian forces overran much of the southern Golan, before being pushed back by an Israeli counterattack. Israel and Syria signed a ceasefire agreement in 1974 that left almost all the Heights in Israeli hands. In1981, Israel passed the Golan Heights Law, effectively annexing the Golan Heights.  An article in JPost pointed out ironically that Israel has ruled over the Golan for more than twice as long as the Syrian government.
https://www.breakingisraelnews.com/125485/netanyahu-compares-trump-to-cyrus-for-recognizing-golan/