A 'cannibal killer' frat boy who ate his victim's face as the man lay dying on the floor was convinced he was Jesus and became obsessed with the Illuminati, a mental-health report states.

Austin Harrouff, now 22, is accused of murdering Michelle Mishcon and John Steven, and trying to eat Stevens' face while police desperately fought to drag the former Florida State student off.
A 38-page psychiatric assessment of Harrouff, seen by the DailyMail.com, which was conducted by the killer's attorneys as part of their insanity defense, lists a disturbing and frightening descent into alleged psychosis.
The three-week trial is scheduled for November 4. Harrouff's attorneys hope the report will be enough to convince a jury that their client should not be held criminally responsible for his actions.
The penalty for first-degree murder in Florida ranges from life without parole to the death sentence. 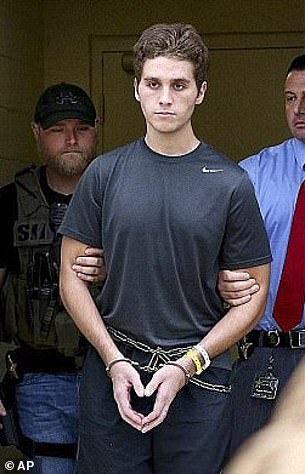 Austin Harrouff was found by eating Michelle Mishcon and John Stevens (right together) in the garage of their home in Tequesta, Florida, in 2016 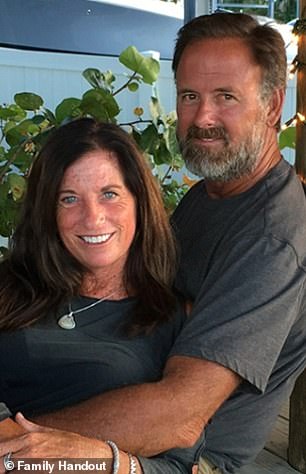 Austin Harrouff was found by eating Michelle Mishcon and John Stevens (right together) in the garage of their home in Tequesta, Florida, in 2016
Among the key points listed in Dr Phillip Resnick's report, which included a six-hour interview with Harrouff, as well as numerous interviews with family and friends, are:
Dr Resnick's report says the fact that he continued to bite his victim 'in the presence of police officers, in spite of threats of being shot, being tased and receiving multiple kicks to the head, suggests that Mr. Harrouff was actively psychotic.'
'He's going to eat you': Cannibal fratboy's bizarre 2016 rap song
Loaded: 0%
Progress: 0%
0:00
Play
Current Time0:00
/
Duration Time2:00
Fullscreen

It went on to conclude Harrouff at the time of the attack was suffering from severe bipolar disorder, and an 'acute manic episode with psychotic features.'
As part of his research, Dr Resnick held a six-hour interview with Harrouff at the Martin County jail.
He said he also reviewed Harrouff's journal, his online searches and videos, studied an interview with Dr Phil, and interviewed numerous friends and family members.
In the lead up to the attack, Dr Resnick said Harrouff researched words like 'mania' and 'hallucinations' and searched whether he was going crazy.
Also detailed in the report is Harrouff's increasing paranoia.
It states he thought there were evil forces in his home and he began sleeping near his sister in order to protect her.
In the days up to the attack he bought a knife for protection, the report says.
Just a day before the savage attack, Dr Resnick said Harrouff began to think he was half-man half-dog and could run 'super fast'.
Harrouff's sister said he began wandering through bushes to be 'one with the animals', and sat in the back seat of the car where dogs sit. 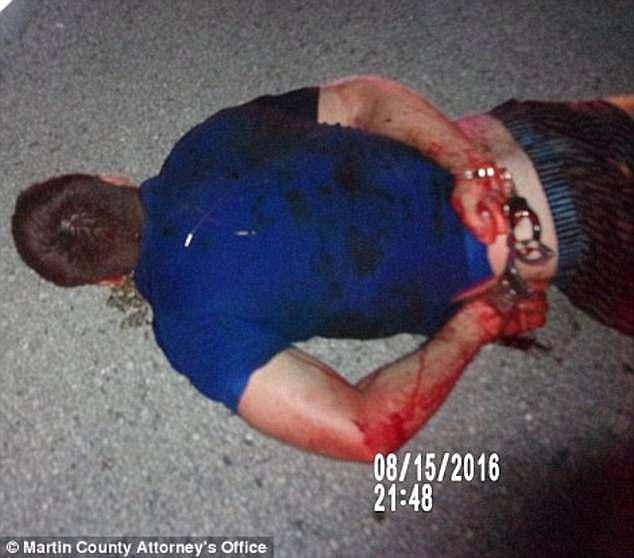 According to police, Harrouff told them he'd been 'eating humans' when he was arrested and begged to be killed
Full article and videos:
https://www.dailymail.co.uk/news/article-6864541/Doctor-Florida-man-believed-half-man-half-dog.html