美國和索羅斯嘗試泰國選舉
US and Soros Take Stab at Thai Elections 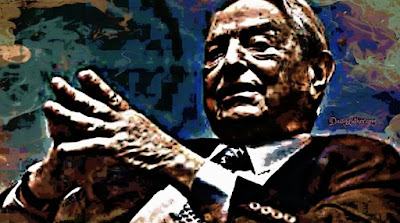 One such front – Human Rights Watch (HRW人權觀察) – has recently released a report condemning upcoming elections as undermining the “right to vote.”

To understand Soros-funded propaganda published by HRW, one must first understand why Thailand has been targeted for regime change in the first place.
Why Thailand?

The Southeast Asian Kingdom of Thailand serves as a pivotal regional hub economically and geopolitically. It has the second largest economy in ASEAN and remains the only Southeast Asian state to have avoided Western colonization.

While some analysts still cling to Cold War-era stereotypes regarding Thailand’s role in the US-led war against Vietnam, the country has since dramatically pivoted away from Washington.

Thailand has also become a key partner in China’s One Belt, One Road (OBOR) initiative. High-speed rail lines are already under construction with proposals for the construction of more lines entering final negotiations.

While Thailand – by necessity – still maintains ties with the West, and Western allies like Japan – it is clear that it has balanced out these ties – with the momentum of Thai foreign policy tilting decisively in favor of Eurasia at Washington’s expense.
For all of these reasons and more, the US has been involved in long-term regime change efforts in Thailand, starting at least as early as 2001 with billionaire and former Carlyle Group adviser Thaksin Shinawatra’s ascent into political power.

By 2001 it was already clear that China’s rise regionally and globally was imminent and that the process of encircling and containing Beijing had become a priority for US foreign policy.

Placing proxies like Thaksin Shinawatra into power in Thailand was aimed at creating a unified front of US client states along China’s peripheries.

Geopolitical analyst Jean Perier’s article, “After Bleeding Thailand Dry, Soros is Going in for the Kill,” provides a detailed history of the 1997 Southeast Asian financial crisis and the role Soros’ financial speculation played in – first precipitating it – then exploiting it. The crisis also created a vector for Western political subversion.

Shinawatra’s rise to power in the wake of the financial disaster was meant to rebuild Thailand according to Washington’s designs. Shinawatra quickly consolidated political power, attempting to built a one-party state under his and his Western sponsors’ control.

He also took multiple steps toward transforming Thailand into a US client state – including committing Thai troops to the illegal US invasion of Iraq in 2003, inviting the US CIA to use Thai territory as part of its global “rendition program,” the privatization of Thailand’s national oil and gas conglomerate PTT, and an attempt to pass an unpopular US-Thai free trade agreement without parliamentary approval.

He also indulged deeply in a myriad of human rights abuses and abuses of power, which eventually provided Thailand’s institutions with a pretext to finally remove him from power through a military coup in 2006.

While Shinawatra’s supporters – including the Western media – claim charges of corruption against him were politically motivated, Wikileaks in a published US diplomatic cable would reveal the US Embassy itself as impressed at the scale of Shinawatra’s corruption – especially in regards to his changing of foreign ownership laws on the same day of his tax-free selling of stocks in his company to Singaporean investors.

Despite the embassy’s admissions of Shinawatra’s corruption, they still supported him and even noted that the move would make it more likely foreign ownership laws could be further liberalized, claiming:

The fact that the deal was structured to get around Thailand’s restrictions on foreign investment nevertheless raises serious questions about the investment climate in Thailand, and shows the limits of liberalization to date. The outcome to hope for going forward is that any domestic political debate about policy issues such as foreign ownership of telecom assets may put to rest some of the Thais fears of market liberalization, and by extension a Free Trade Agreement with the United States.


Since then, Shinawatra has been tried and convicted of corruption and sentenced to 2 years in prison – a sentence he has since evaded as a fugitive hiding abroad.

Considering Shinawatra’s utility as a US proxy and his enthusiastic attempt from 2001-2006 to transform Thailand into a fully integrated US client state – it is obvious why the US and its European and corporate partners seek to return him and his associates to power.

It has, however, become an increasingly uphill battle. While still able to swindle elections through overt vote-buying upcountry and his regular use of organized terrorism, Shinawatra himself through his serial political failures and upon asset seizures by Thai courts – has gone from the 4th richest in Thailand to 19th. Impressive popular anti-Shinawatra protests in 2014 marked unprecedented, nationwide opposition to his return to power – a sentiment that will only likely to have grown since. 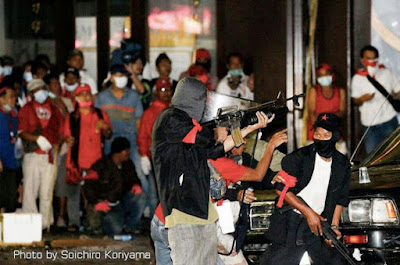 Image: Thaksin Shinawatra deployed hardcore terrorists (between 400-500) in Bangkok in 2010 to initiate now familiar “color revolution” violence aimed at regime change in Thailand. Fears persist that he and his Western sponsors will once again resort to terrorism if they fail to take power in upcoming elections, or are removed from office soon after.

But even if he is unable to take power – his ability to still divide and set Thailand back – including through additional violence – likewise serves Washington and Wall Street’s purpose of denying nations like China a viable partner.

Since Shinawatra’s ousting in 2006 – he and an army of political opposition parties, supposed “rights” groups, student “activists,” and media fronts have been openly backed by Washington, London, and Brussels through direct political support and lobbying, and through US-UK-European-funded NGOs (nongovernmental organizations) – with virtually all of them at least partially funded by George Soros’ Open Society Foundation.

Fronts regularly cited by the Western media ahead of Thai elections funded by either Soros’ Open Society or the US National Endowment for Democracy (NED) or both include media fronts Prachatai, Isaan Record, and BenarNews.

There are also entire political parties operating on behalf of Thaksin Shinawatra such as Future Forward which include US and Soros-funded “activists” as “co-founders.” 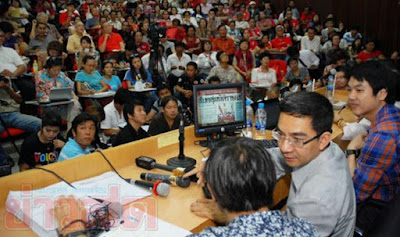 Rangsiman Rome has also joined the ranks of Future Forward. Rome was co-founder of the “Democracy Restoration Group” and regularly organized protests with US NED and Soros-funded TLHR member Anon Nampa, as well as Nuttaa ‘Bow’ Mahattana who was literally caught in bed with a senior member of Thaksin Shinawatra’s Pheu Thai Party. 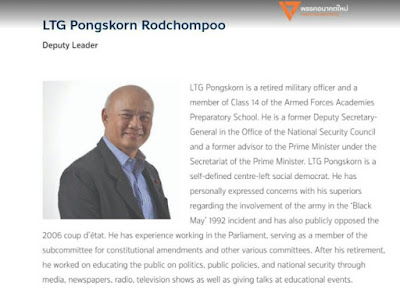 Future Forward also includes former Shinawatra loyalists including ex-army general Pongskorn Rodchompoo – who was promoted during the Yingluck Shinawatra administration in a bid to gain leverage within the military.

The Bangkok Post in a 2015 article titled, “NSC deputy chief shunted to PM’s Office,” would report:

Lt Gen Pongsakorn was appointed to the NSC by then-prime minister Yingluck Shinawatra, moving from the Supreme Command, two years ago.
He followed the same route as Paradorn Pattanatabut, who was earlier removed from the NSC secretary general’s job by Gen Prayut to a similar position as adviser to the prime minister.

And Future Forward itself is ceaselessly promoted by the myriad of US NED and Soros-funded fronts operating in Thailand and abroad as well as by the Western media.

While other candidates were invited, Thanathorn J. was singled out and promoted, particularly by the BBC’s Jonathan Head who fielded softball questions that even when fumbled by Thanathorn J., were in no way challenged or followed up. It is a pattern that is reflected throughout the entirety of not only the BBC’s coverage of Thailand’s upcoming elections, but across the entirety of the Western media.

Future Forward is only one of several proxy parties being promoted by the West as vectors of returning Thaksin Shinawatra – and the interests he represents – back into power.

But Future Forward’s internal and external factors fully illustrate how the US government through the National Endowment for Democracy and private financiers like George Soros and his Open Society Foundation are not only interfering in Thailand’s internal political affairs and upcoming elections – they are collectively creating and attempting to install into power an entire political party.

In it, only a single mention is made of Thaksin Shinawatra. His current role in running multiple parties to return himself to power is entirely omitted. The fact that HRW and the Thai opposition it is supporting are both funded by Soros via Open Society is also conveniently omitted.

In the same sense, HRW is citing allegedly repressive measures amid Thai elections without mentioning those targeted by such measures are working for Thaksin Shinawatra – a convicted criminal and fugitive – and his foreign sponsors. His participation in elections is both illegal and undemocratic, a fact unmentioned by HRW and the army of foreign-funded agitators it serves in the ranks of.

It is only through dishonest but deliberate omissions of these facts that the West is able to meddle in yet another election abroad and attempt to once again topple a government impeding its own self-serving agenda in a nation thousands of miles for its own shores.

Whether Western-backed regime change is successful or not – Thailand’s political crisis will likely continue – including another round of protests and counter-protests, deadly “color revolution-style” violence, and possibly another intervention by Thailand’s courts or military. Either way, it will at the very least impede Thailand’s continued pivot from West to East and divert resources away from the nation’s future development. 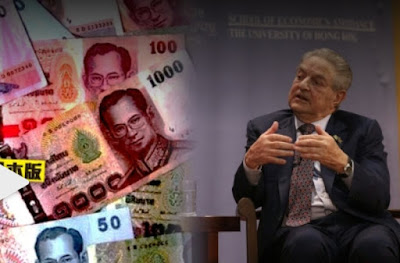