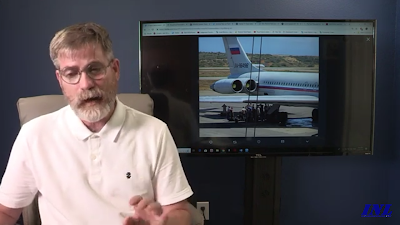 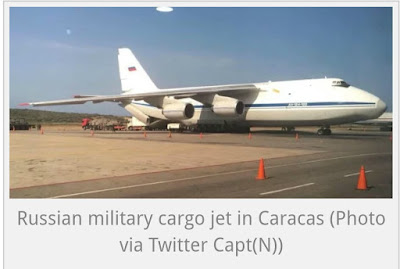 Two Russian planes carrying equipment and nearly 100 troops were spotted at the Caracas airport on Saturday, indicating that the relationship between Venezuela and Moscow has advanced to the level of military cooperation.

An Ilyushin IL-62 passenger jet and an Antonov AN-124 military cargo were tracked by flight-tracking website Flightradar24, reportedly stopping over in Syria where Russia has a military airbase near Latakia. The cargo plane left Caracas on Sunday afternoon, according to Adsbexchange, another flight-tracking site. 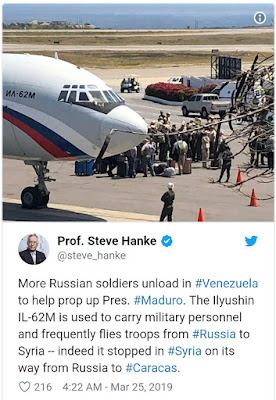 Sputnik News, a news site established by the Russian government, reported that a group of Russian military personnel were in Caracas to take part in consultations with country’s officials on defense industry cooperation. The article stated that the visit was the result of military contracts signed “years ago.”

The article described the dispute between Juan Guaido and Nicolas Maduro over who is the legitimate president of the country. Russia supports the claim Maduro who first assumed office in 2013. The U.S. supports Guaido who has been serving as President of the National Assembly of Venezuela and as the partially recognized acting President of Venezuela since January 2019.

Sputnik reported that both the Venezuelan and Russian governments are concerned that the U.S. will resort to military force to remove Maduro from office. The current White House administration has place economic sanctions on Venezuela’s oil industry while at the same time attempting to provide humanitarian aid for the country’s growing crisis. In February, Maduro’s government blocked U.S. humanitarian aid from crossing their borders. 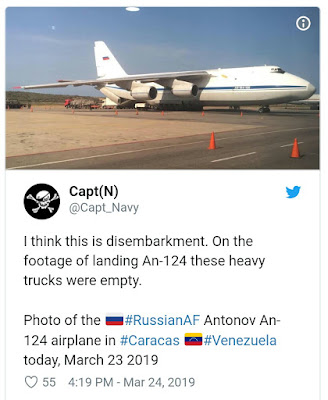