Could the next great Chinese advanced missile threat come disguised as an innocuous looking shipping transport vessel? A new report in The Washington Free Beacon suggests so, as it details China's new long-range cruise missile which can be launched directly from a shipping container device, which is meant to conceal detection of the threat right up until the moment of launch.
Alarmingly, it's already being flight tested, according to analysts cited in the report, which further finds the technology "could turn Beijing's large fleet of freighters into potential warships and commercial ports into future missile bases." If cruise missiles can be hidden in international shipping containers, China could be a major threat to western targets simply as it moves millions of tons of goods every year.

Rick Fisher, a senior fellow at the International Assessment and Strategy Center, told the Free Beacon, "Shipping container missile launchers can be smuggled through ports or via highway ports of entry and stored for years in a climate-controlled building within range of U.S. military based and taken out when needed for military operations.”
"Potentially, Chinese missile launching containers could be stored near the Port of Seattle, waiting for the day they can launch an electromagnetic pulse warhead-armed missiles over the Bangor nuclear ballistic missile submarine base,” he speculated.
The concealed nature of a launch-ready long-range missile also presents the nightmare scenario of ease of proliferation to rogue actors such as Iran or North Korea.  "Containerized missiles give China, Russia, and its rogue state partners new options for directly or indirectly for attacking the United States and its allies," Fisher added.
However, it should be noted that a defense company in Russia appears to have been the first to develop and marketshipping container weapons nearly a decade ago. Yet even at that time analysts began to worry of that Russian private sector defense technology development, “Unless sales are very tightly controlled, there is a danger that it could end up in the wrong hands.”
The new missile being developed as part of the container-launch device program is said to be a variant of an advanced anti-ship missile called YJ-18C, according to US defense officials cited in the report.

One career US military officer and former Pacific Fleet intelligence chief described how a container concealed Chinese cruise missile could be a game changer in terms of assessing threats near US waters and ports:

Retired Navy Capt. Jim Fanell, a former Pacific Fleet intelligence chief, said a containerized YJ-18 anti-ship cruise missile would add a significant threat to the Navy given the volume of Chinese container ships that enter U.S. ports on the west and east coast, well within range of the vast majority of the U.S. fleet.
"If this capability is confirmed, it will require a completely new screening regime for all PRC flagged commercial ships bound for U.S. ports," Fanell said.
Additionally the container-launched missiles could be targeted in foreign ports used by Chinese-flagged merchant vessels.

On that front, Washington military planners say there is much to be concerned about. One adviser and research professor at the US Army War College described China's military activities in Latin America and the Caribbean as "extensive".
A Russian company had previously simulated how its "container weapons" systems would operate. 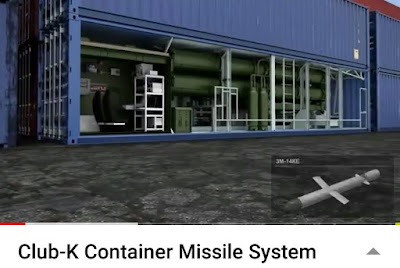