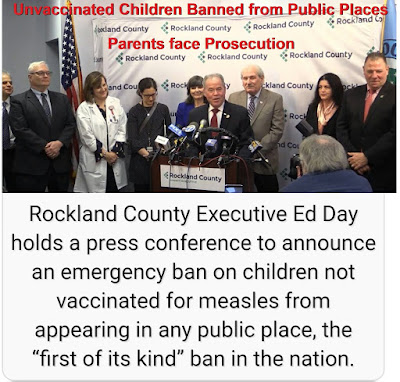 Rockland County Executive Ed Day held a press conference earlier today to announce that he had declared a “state of emergency” regarding the New York state county’s 153 cases of measles over a 6-month period, and placed a ban on all children under the age of 18 from appearing in any public area, which includes schools, malls and places of worship.
Mr. Day said that this was the “first such effort of this kind nationally.”
The emergency ban is clearly targeted towards parents of unvaccinated children, as Mr. Day stated:

Parents will be held accountable if they are found to be in violation of this state of emergency act. And the focus of this effort is on the parents of these children. We are urging them once again, now with the authority of law, to get your children vaccinated.

Mr. Day tried to downplay fears of police checkpoints and random checks for vaccination status, but he also stated that any parent found to be not in compliance with the emergency order would be referred to the district attorney’s office for possible prosecution.

If we have a situation where it comes to our attention that a parent is willingly, knowingly, not allowing a child to be vaccinated, under the emergency order, it will be referred into the district attorney.

The Rockland County Health Department, who recommended the emergency ban, has reportedly been going door to door and calling homes within the community in an effort to deal with the measles “epidemic.”
Day was critical of those who did not welcome the home visitations:

Our inspectors have begun to meet increasing resistance from those they are trying to protect.
Our health inspectors have been hung up upon or told not to call again. They’ve been told “we’re not discussing this – do not come back,” when visiting the homes of infected individuals as part of their investigations.
This kind of response is not acceptable, and frankly, irresponsible.
It is extremely difficult for our department of health to do their jobs when people refuse to cooperate with our investigators and fail to notify doctors when they are sick.

The Health Department and County Executive Ed Day plan to introduce legislation that would apparently make such a ban permanent in Rock County:

We’re in the process of drafting a local law to provide for the protection of county residents and visitor[s] in the events of outbreaks of communicable diseases for consideration of our partners in government the Rockland County legislature.
We owe this to the residents of our community so that we never have to go through this again.

During the question period of the news conference, someone asked a question about the possibility of legal challenges to the ban based on religious objections. Most of the measles outbreaks in Rockland County have occurred in Jewish communities, where travelers from Israel have allegedly been infected with the measles there.
Also, New York is one of the states in the U.S. that allows religious exemptions to vaccines by law.
Mr. Day was rather adamant in his reply:

So apparently, the county does not plan on honoring New York State’s legal religious exemptions.
When confronted with more specific questions about the MMR vaccine, such as one person who asked if the MMR vaccine was for the correct strain of measles currently being found in the community, Mr. Day chose to criticize those who had suffered from vaccine injuries, claiming a higher moral ground for “the greater good” of society:

If you are going to People Magazine, and Jenny McCarthy for your medical advice, then you need to start re-examining your life.
There’s risk in everything.
Could there have been a child or a few children who have been compromised by a vaccination? Of course there could be.
But there’s something called ‘The Greater Good’ here. Society has to come to an understanding at some point, that we have a responsibility to the greater good of the community.

Another question posed by reporters was why the ban only included children, when obviously adults in the community are also not fully vaccinated with the MMR vaccine, or had been vaccinated many years earlier where the vaccine would have worn off by now.
The reply was simply that the majority of the measles outbreaks were among children under 18.
Several other county officials joined Ed Day at the press conference, including Rockland County Social Services Commissioner Joan Silvestri who oversees the county’s Child Protection Services (CPS).
Does this mean parents face losing their children to CPS if they refuse to vaccinate their children?
Rockland County Executive Ed Day can be contacted here. His Public Facebook Page is here.
Watch the entire press conference:
https://vaccineimpact.com/2019/breaking-rockland-county-ny-becomes-americas-first-vaccine-police-state-bans-unvaccinated-children-from-public-places-health-dept-goes-door-to-door/


THESE ARE THE FASCIST TERRORISTS IN NEW YORK STARTING VACCINE POLICE AND SAYING CHILDREN UNDER 18 CANNOT GO IN PUBLIC WITHOUT BEING INJECTED WITH MMR. PLEASE LEAVE COMMENTS ON THEIR SITE.https://www.facebook.com/558689210875664/posts/2069321299812440/?sfnsn=mo 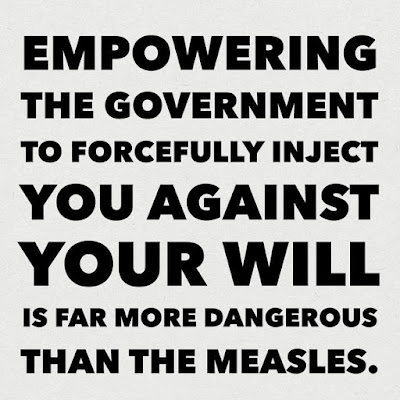 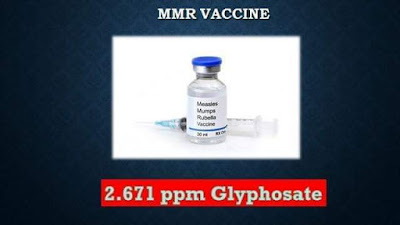 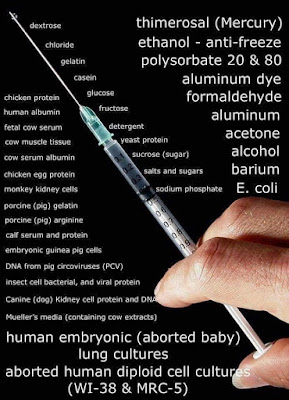 During this clinic, the Health Department will be offering non-immune residents one dose of measles, mumps, rubella (MMR) vaccine at no cost. 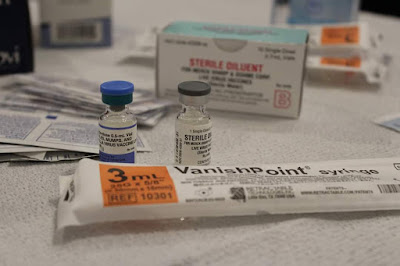