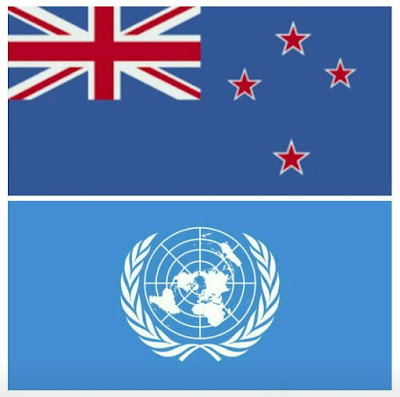 The United Nations has taken over New Zealand.
People from New Zealand are disappearing from my website. The loss of readership from this country, alone, is staggering. And now I know why. New Zealand is censoring, Chinese style, anyone who is conservative. New Zealand is in the process of remaking itself as a newly-orientated version of Communist China with strong Muslim overtones. Effectively New Zealand has been wiped clean a western nation.  New Zealand will be overrun very soon with overwhelming numbers of Muslim immigrants along with a very repressive government. A look at my website statistics with regard to New Zealand readers, illustrates the isolation of this soon-t0-be former western nation.

The CSS and New Zealand

In my website analytics, New Zealand accounts for about 4% of my total audience that visits my website. Here is the breakdown:

Dear Dave Hodges
We follow you religiously. I am presently on a business trip to Vietnam. I can view your website and read everything you have posted. However, my wife  can back in New Zealand cannot access your site. Her sister can but the articles are about 5 days old as we discovered when we compared notes. Your YT channel is not accessible at all.  We are all seeing UN officials in our businesses and around our politicians….
In short, conservative talk show hosts such as yourself are being banned from our internet. We are being turned into Nazi Germany. Everything conservative is now illegal…..

An there is a second email that is noteworthy.

Dear Dave,
I wanted you to know that you are being banned in New Zealand. I am presently in Hawaii and I could not access your platforms as recently as this past Sunday while in New Zealand. It is clear that our government has been overtaken by the UN. They are everywhere. One show said the UN is here for provide aid and comfort in the aftermath of Muslim murders. I am deep disturbed that John Podesta and the UN were in our country prior to the event an so many of know this.
Our government in a few short weeks has become so repressive. They want throw people in prison for accessing information on the internet that they consider harmful to the country. We are not allowed to watch the shootings on video. We cannot read the manifesto. We have been told not to talk about his event. It is my belief that a coup has been created for the purpose of taking over our political figures so they can control policy…

Finally, I received another communication from a person in New Zealand who I somewhat know. They sent me the following front page image from a major New Zealand Newspaper. It is clear that New Zealanders are being pushed toward accepting massive Muslim immigration.

If this headline is not self-explanatory, please see the following:
Just before receiving these emails, I was obtaining information that was highly suggestive of the fact that the UN was taking over the country of New Zealand. It is apparent that the elite are also moving many of their hideaways to this country as well when the SHTF with the coming war.

https://youtu.be/HUuxACKcB8E
I have had some personal experience with New Zealand. I once looked at a job opportunity there only to be told I would “have to lose the conservatism in the States”. Needless to say, I did not pursue the job.

New Zealand is witnessing a complete fascist takeover. Extreme censorship, draconian penalties and gun confiscation are all at work, as well as a United Nations takeover. Also included seems to be a government transformation from being a western nation to a Muslim nation with the public conversion of may elites to Islam. This just adds one more enemy to our growing list. The why behind this appears to center around that New Zealand is the new refuge from WW III. More on that in a future article.