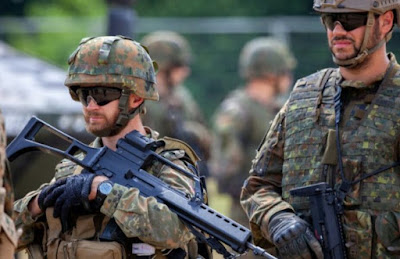 For a long time now, the German military has always made a conscious attempt rid its ranks of soldiers who harbor neo-Nazi sympathies. However, recent claims made by a number of prominent German news outlets suggest that the military is now targeting soldiers who merely support the national populist Alternative for Germany (AfD) for expulsion too.
Numerous investigations have professed that the Bundeswehr has now started to broaden the range of individuals who it considers “not fit to serve in the armed forces” which have encompassed “sympathizers of Alternative for Germany (AfD) and of Hungarian Prime Minister Viktor Orbán,” according to Il Giornale.
According to Der Spiegel, a German weekly news magazine, about 64 of the discharged soldiers were members of the anti-mass migration youth movement Generation Identity.
For a long time now, Generation Identity has been under observation by German security services and have been targeted by police raids in the past due to their nationalist politics. In Austria, the organization was accused of creating a ‘mafia’ organization, but were later acquitted of all charges following a trial in 2018. The group has also been banned on Facebook.
The Bundeswehr is said to have also discharged another 64 individuals who were members of the so-called Reichsburger movement, a movement that doesn’t recognize the legitimacy of the present day constitution in Germany, and who is said to idealize the historic 19thcentury German state.
Many have compared the Reichsburger movement to what some commonwealth countries and America refers to as ‘sovereign citizen movements’. The movement has been subject to a number of raids by German security forces. In January of 2017, two suspects from the group were arrested an accused of planning violent attacks against police officials, migrants, and Jews.
Huge growth in the Reichsburger movement was reported last year by the German domestic intelligence agency, the BfV. Intelligence reports suggested that the movement’s numbers had grown from 10,000 in 2016 to more than 16,500 by the end of 2017.
An anonimous source told Der Spiegel that at the very least there were 450 cases of expulsion for ‘far-right extremism’.
https://voiceofeurope.com/2019/03/report-german-military-is-purging-right-wing-populists-from-its-ranks/