'我相信UFOs...及我看過他們'：加拿大前國防部長指控美國政府的掩蓋
'I believe in UFOs... and I've seen them': Former Canadian defence minister accuses American government of cover-up
By Daily Mail Reporter
Last updated at 2:20 AM on 26th February 2011
Translation by Autumnson Blog

-He says he'd get fired for his views if in office today
-他說他會因他的看法被解僱，如果在今天的辦公室
-Claims U.S. military had weapons to use against UFOs and that aliens can help us learn about climate change
-宣稱美軍有對付 UFOs的武器，兼且外星人能幫助我們了解氣候變化

He is on an advisory body to the Queen, works as an environmental campaigner and is credited with integrating Canada's armed forces.
他是在一個對英女皇的諮詢機構，工作為一名環境活動家，並被讚揚因整合加拿大的武裝部隊。
But aside from all this, the ex-Canadian defence minister says UFOs are real, aliens have visited Earth and the U.S. government is covering up information about them.
但除了這一切，前加拿大國防部長說不明飛行物是真的，外星人已曾到訪地球和美國政府正在遮蓋它們的資料。
Paul Hellyer says he would probably get fired for his views if he was still Canada's Minister of National Defense today, but is adamant he has seen UFOs himself.
保羅赫利爾說他會可能因他的看法被解僱，如果他今天仍是加拿大的國防部長，但堅稱他自己已曾看到UFOs。 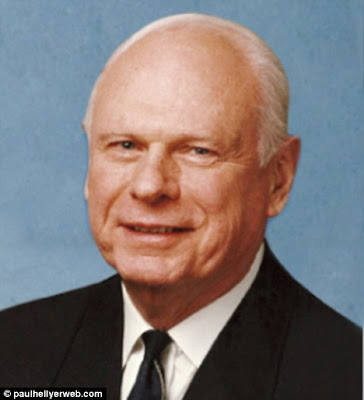 Paul Hellyer: The ex-Canadian Minister of National Defense says he is convinced that UFOs are real and alleges the U.S. has covered up information on them
保羅赫利爾：前加拿大國防部長說他相信UFO是真的，並聲稱美國掩蓋它們的資料

The 87-year-old, who is the longest-serving member of the Queen's Privy Council for Canada, said he never discussed his views with top officials when he was in office.
在女王的加拿大樞密院任職時間最長的87歲成員說，他從來沒有與高級官員討論過他的意見，當他在辦公室時。
‘This is the kind of thing that sometimes they don't tell politicians about,’ he said.
'這是那種東西有時他們不會告訴政治家有關的，'他說。
‘I have no doubt that there were probably people in my employ who would have been more knowledgeable than I was at the time.’
'我毫不懷疑，在那時我僱用的人中有人可能會比我知道得更多。'
‘I got periodic reports on sightings and I looked at them very casually. It was decided that about 80 per cent of them were natural phenomena of one sort or another and the other 20 per cent roughly were unexplained and therefore unidentified.’
'我得到定期的目擊報告，和我很隨意地看著它們。決定過約百分之八十的是一種或另一種的自然現象，和其他百分之二十粗略是原因不明的和因此難以辯明。'
Mr Hellyer is presenting his views on UFOs this week at the International UFO Congress in Scottsdale, Arizona, and says he is ‘convinced’ of their existence.
赫利爾先生在本週於亞利桑那州斯科茨代爾舉行的國際UFO大會，提出他的不明飛行物看法，並說他是'相信'它們的存在。
‘We lived too long in a sense of isolation, thinking that Earth was the centre of the cosmos, that we were the only species and, therefore, probably the most advanced.'
'我們在隔離感下活得太久了，認為地球是宇宙的中心，即我們是唯一的物種，和因此可能是最先進的。'
‘And when we come to the realisation that we're not any of those things, then I think we should be aware of it (and) learn to live with it,' he told AOL News.
'而當我們來到認知我們不是那些東西的任何其中，那麼我認為我們應該知道它（和）學會與它共處，他告訴美國在線新聞。 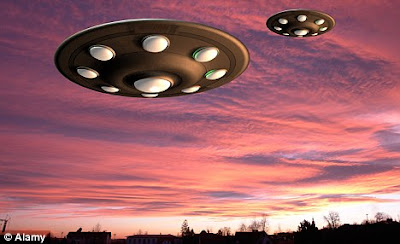 Proportions: Mr Hellyer believes about 80 per cent of sighting reports were natural phenomena and the other 20 per cent roughly were of UFOs
比例：赫利爾先生相信約 80%的目擊報告是自然現象，和其它的20%粗略是UFO的

Mr Hellyer claims to have seen a UFO with his wife when spending last Thanksgiving near Toronto, and they stared at the sky for 20 minutes watching it moving.
赫利爾先生聲稱和他的妻子一起看到一架UFO，去年感恩節時於多倫多附近，他們盯著天空20分鐘看它移動。 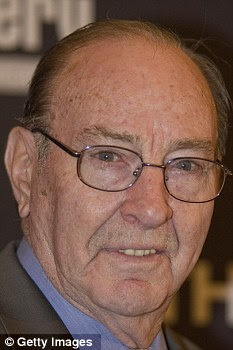 He told AOL: ‘By process of elimination, we determined it wasn't a star or satellite and it wasn't the space station, so there was really no explanation for it other than it was, in fact, a UFO. It looked like a star, but it manoeuvred in a way that stars don't.’
他告訴美國在線：'由消除的過程，我們確定它不是一顆星或衛星，和它不是空間站，所以真的沒有解釋給它除了它是它，事實上是一架不明飛行物。它看起來像星星，但它機動的方式星星是不會的。
He believes the U.S. has developed new forms of energy at secret ‘black operation’ units using alien technology and that a ‘shadow government’ is behind this activity.
他相信美國已發展出新形式的能量，在秘密的'黑色行動'單位利用外星人科技，而一個'影子政府'是在這活動的背後。
Apollo 14 astronaut Edgar Mitchell, founder of the Institute of Noetic Sciences research group, has described Mr Hellyer's theory as an 'important contribution' to literature.
阿波羅 14號宇航員埃德加米切爾，思維科學研究所的研究小組的創辦人，已形容赫利爾先生的理論對文獻是為一個'重要的貢獻'。
‘His experience in government, his interest in exo-politics and the issues of sustainability of civilization are significant areas of current discourse,' he said.
'他的政府經驗，他對外星政治的興趣和文明的可持續發展議題都是當前演講的重要區域，'他說。

Retired Army Colonel John Alexander, also speaking at this week’s conference, believes UFOs are real but says there has never been a cover-up.

Mr Hellyer added: ‘People keep talking about transparency and still not telling the truth, and this applies in various other areas as well as UFOs.

'It's just about time that we started getting open with each other and trying to get along and live together.’

He said he would 'probably be open-mouthed about it' and 'might get fired for it' if he talked about his opinions in office today.

He said in 2005 that the U.S. military was preparing weapons to use against aliens, and they 'could get us into an intergalactic war without us ever having any warning'. 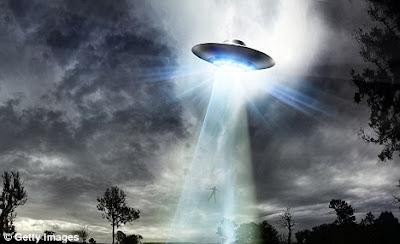 Sighting: Mr Hellyer says he saw a UFO when spending last Thanksgiving near Toronto and he stared at the sky for 20 minutes watching it moving
目擊：赫利爾先生說他看過一架UFO，當在去年感恩節時於多倫多附近，及他盯著天空看它移動20分鐘

He said two years later that governments should be using alternatives to fossil fuels from alien technology obtained during alleged UFO crashes to fight climate change.

Mr Hellyer was responsible in 1963 for creating the Canadian Armed Forces from the integration of the Royal Canadian army, navy and air force into one organisation.
He has also campaigned over issues such as monetary reform, the Middle East and the environment.

Mr Hellyer's website says that he is the 'first person of cabinet rank in the G8 group of countries to state unequivocally “UFO’s are as real as the airplanes flying overhead".'

Other public figures who have stated UFOs are of extra-terrestrial origin include former USSR leader Mikhail Gorbachev, Professor Stephen Hawking and Ronald Reagan.