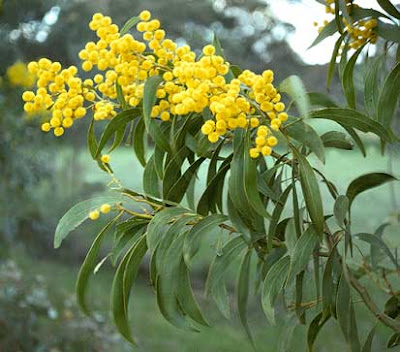 From info at Garden Freedom

Legislation being proposed in Australia would criminalize most permaculturists, farmers, gardeners, nurseries and bush regenerators by banning any plant that contains DMT – a naturally-occurring hallucinogen. Five plants are currently criminalized, but the new list will include hundreds (possibly thousands) of other species that are common garden plants and include a significant number of common native plants including the national flower, the wattle. [Image: Australia's National Flower, Acacia pycnantha]
澳洲正在擬議立法，將有機會判定大部份永久培養者、農民、園丁、苗圃和小樹林更生者為犯法行為，透過禁制合有二甲基色胺的任何植物 - 一種自然產生的迷幻劑。目前判定五種植物為犯法行為，但新名單將包括數百種（也許數千種）其它物種常見於園林植物，及包括有相當數量的普通原生植物包括國花 - 金合歡。 [圖片：澳大利亞國花-相思pycnantha]
Having any of these plants could get you charged with and convicted of a federal drugs violation. The list can be found here, comprising about four pages of the 41-page document.
擁有任何這些植物可讓你被控和定罪違反聯邦藥品法，名單可在下面找到，包括41頁文件的約四頁。
Garden Freedom is leading a campaign to block the legislation. The public is urged to contact the Minister for Justice, the Hon Brendan O’Connor MP with comments at Criminal.Law@ag.gov.au by March 11. (See instructions here).
花園自由正在領導一場運動阻止立法，市民被催促約在3月11日前聯絡司法部長、國會議員布倫丹奧康納向Criminal.Law @ ag.gov.au提出見。 （見說明此處）。
The purpose of this new legislation is supposedly to stop major drug trafficking, yet many of the targeted plants have never been traded for drugs and have no value as drug plants, because they only contain traces of the compounds.
這項新立法的目的據說是停止主要的毒品販運，但許多被針對的植物從未作出毒品交易，和作為毒品植物是沒有價值的，因為它們只含有微量的化合物。
The proposed laws will make hundreds or possibly thousands of plants illegal. Many of these are common garden plants that honest, law abiding citizens have legally grown for as long as they remember. The laws will affect the commercial propagators, nurseries, farmers, collectors, botanic gardens, seed merchants, landcare groups and most gardeners.

■Farmers may need to change their pasture grasses and legumes.
■Gardeners, collectors, and botanic gardens will have to remove precious plants from their collections.
■Landcare and dunecare groups may no longer work with the species they are used to and that are native to their region.
■Nurseries may no longer propagate many of the plants they normally propagate.
■Botanists may no longer collect samples from many plants.
■Seedbanks will need to destroy many of their precious seeds.
DMT (dimethyltryptamine) is ubiquitous in nature and is likely to be present in thousands of species. If DMT is found in one species within a genus then it is likely to be found in other species of that genus. Some common plants include grasses, wattles, peas, nutmeg, screwpines, buckwheat, citrus trees, and violets. Also included are legumes, the Leopard tree, Honey Locust, wisteria and cattle forage plants like Desmodium, wetland plants such as the Common Rush (Phragmites), and common pasture grasses (Phalaris spp) — even the ice plants in your Granny’s rock garden would be effected by the legislation.

The existing schedule of criminalized plants include:

The proposed new schedule will include: