俄中美將會否聯合瓜分委內瑞拉的財富抑或這會否是世三戰?
Will Russia, China and the US Jointly Carve Up Venezuelan Wealth or Is This World War III? 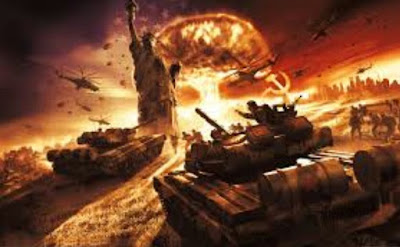 On the surface of the Venezuela conflict, we seem to have a case of the irresistible force facing off against the immovable object. Who is going to win? Will it be the United States or will it be the combined forces of Russian, China and Cuba? I think the answer is neither. This article will discuss why the most likely outcome is a joint venture that controls enezuelVa much to the chagrin of the Rothschild bankers.

A few months ago, the Rothschilds seemed to have the world’s powers where they wanted them. On one hand, we had the BRICS who are dedicated to not being under the influence of the American petrodollar and following gold backed purchases of oil from nations like Iran. On the other hand, the US would presumably want to promote the status quo and maintain the dollar as the world’s reserve currency as manifested in all oil purchases. It would also seem that the world is moving towards WW III among these two divergent groups. However, there has been a sea change and the Rothschilds central banking cartel is now being threatened.

Tyler Durden from Zero Hedge is reporting  the following as it has much bearing on the outcome of the Venezuela crisis:

Russian Security Council Secretary Nikolai Patrushev toldArgumenty i Faktythat the US is deploying military assets to Puerto Rico and Colombia for a future military intervention in Venezuela to remove President Nicolás Maduro from power.
“Showing sarcasm and arrogance towards the Venezuelan people, the United States is preparing a military invasion of an independent state,” Patrushev told the Russian newspaper.
According to his statements, Washington is transferring“American special operations forces to Puerto Rico, the landing of US forces in Colombia,” which “clearly indicates that the Pentagon is reinforcing the grouping of troops in the region.”
As he explained, Venezuela rejected humanitarian aid imposed on it by the US because itrecognizes that Washington uses aid as a precursor to military intervention.

“And the Venezuelan people understand this well. Hence, such a reaction, the refusal to accept cargo from the aggressor country and the support of their president,” Patrushev added.

The Russian security official said that Washington recommended holding several talks on Venezuela, and Moscow accepted. However, Trump administration officials started using far-fetched pretexts to circumvent these discussions, Patrushev added.,,
Last week, president Putin said that Russia is militarily ready for a“Cuban Missile-style crisis”, commenting on nuclear first strike capability amidst growing tensions with the US. The remarks were given to Russian media following a prior speech wherein he warned Moscow will match any attempt by the US to station intermediate-range nuclear missiles in Europe in the wake of the now collapsing INF treaty.
Putin specifically threatened deployment of hypersonic missiles on ships and submarines which could enter US territorial waters without detection if American intermediate-range missiles move into Europe….
While it remains unclear just how far Russia’s commitment to protecting the Maduro regime would stretch…

y
This is where the Durden article makes a lot of sense. I have a State Department source that tells me that these talks are already taking place. One of the possibilities is that Russia and the US will divide the economic boot in Venezuela into zones of influence with each country, including China, will divide up the vast oil and gold assets in VZ. The same source also said that this is being discussed, in secret, between Trump officials and the Chinese in their ongoing bilateral trade talks. I asked the obvious question as to why the Russians are threatening to nuke American targets like Camp David and the Pentagon. I was told that this is more than likely rhetoric designed to provide a smokescreen for what is really being discussed between the planet’s super-powers.
I have spoken to several economic experts that I rely on for accurate information and to a person, they do not believe that Putin will risk WW III over Venezuela. They feel that this is typical “art of the deal stuff” being employed by Trump and that the super-powers are going to carve up Venezuela like the proverbial Thanksgiving turkey that it has become. I asked my State Department source what that would look like and  they said Berlin, following World War II. I think it is likely that the Russia will turn on Venezuela, if it can find a way to harness some of their wealth. China, on the other hand, is in such dire economic straits, that they will accept any financial deal that keeps them a step or two ahead of the proverbial burning bridge. Has anyone noticed that the Trump administration is strangely silent about the Chinese military and their role in the confiscation of white farmers’ land in South Africa in which China is sharing in this tyranny by the South African government? It leads one to believe that the Trump administration has reached an understanding on China’s role in Africa in exchange for future considerations in Venezuela. That view is shared by some experts I have spoken with.

Maduro has no options as it relates to his autonomy of a leader of a country that has drawn the attention of the world’s super-powers. If Russia, China and Cuba keep Maduro in play as a leader, he will only operate as a puppet leader. His resources will be plundered by these BRICS nations and his people’s labor will be in support of propping up the economies of Russia, China and Cuba. And as I am predicting, America can have its name added to this list of imperial nations as well if all the players join forces and turn Maduro into a puppet.
Pompeo and Bolton, both extreme NEOCONS, are poised to go to war. However, the Colombian exercise is posturing. Neither side wants war because it would defeat the purpose of controlling Venezuela’s vast resources. Half a loaf is better than no loaf.

The Fly In the Ointment

Russia, China and the US are playing with fire. The globalist bankers, the Rothschild satanists. The Rothschilds want  a war of total destruction, so they can usher in their New World Order without interference. I would look for a series of economic actions coming out of the central banks that promote differences between the three super-powers. Further, I would look for Soros forces to continue fan the flames of civil war in the United States. And I firmly believe that President Trump has never been closer to assassination than he is right now. Russia, China and the US, from the Rothschild perspective has neutralized Europe and the central banks. Three months ago, Macron said the EU needed an army to respond to the Russian, Chinese and American threat. This is exactly what he was talking about.
Could the Rothschilds get World War III started. An assassination of Trump coule with the removal Pence could dramatically change the dynamics of this situation. Who will win out? Will the Rothschilds be able to reassert control over Russia and China. This is not very damn likely. Russia has passed a law which will force Putin to withdraw from the Internet. Russia has consistently tried to uncouple from globalist central banking. China is so desperate that they will do anything to stay afloat, but they do not want war because it would open the door to a new age Boxer Rebellion as the peasants in the outlying provinces might rise up against he Chinese Communist Party. As long as Trump is President, free trade agreements are largely dead in the water. This is the death of the hegemony of the globalists which bypasses legitimate government authority with free trade corporatism. Who will win out?  At this point, nobody knows. The Rothschilds do not know. China, Russia and the US do not know. As I alluded to, the globalists best bet to get their World War III going is start a civil war in the US and remove Trump.
Finally, it has become my belief that the Rothschilds will use terrorists to create a number of false flag scenarios designed to get the war started. It is also my opinion that the Mueller investigation was designed to keep Trump and Putin apart for fear of trump being impeached for russian collusion. If Trump and Putin ever joined forces, the Rothschilds would be in severe decline. At the end of the day, this go either way. We could see a three nation brand of imperialism in Venezuela. Or, we could see a provoked war. 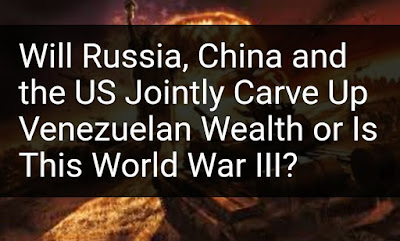