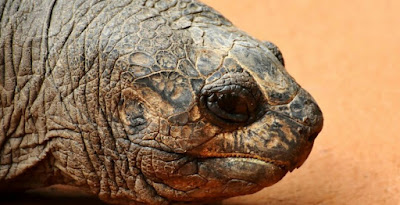 Defining extinction used to be so easy. If you find bones that don’t match any living creature, they must be from something that went extinct, like the T. rex. Then we started finding frozen flesh on a few bones and some extinct animals may soon be bought back into existence, like the woolly mammoth. Recorded history gave us documentation on when the last many living creatures officially expired, like the dodo and passenger pigeon. Now we have explorers searching for those recently-extinct animals and insects and showing that history may have been too hasty in writing them off. Two examples were announced this week when researchers revealed the confirmed existence of two such species that are now still alive – albeit in minuscule numbers – a giant tortoise and a giant thumb-sized bee that could possibly make even the tortoise run faster. 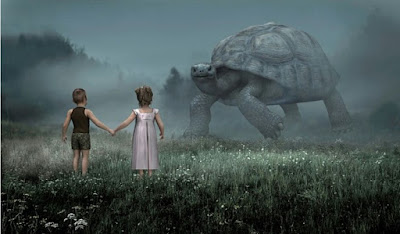 On February 20, Ecuador’s Minister of the Environment, Marcelo Mata Guerrero, announced that a female Fernandina Giant Tortoise (Chelonoidis phantasticus), a species that has not been seen since 1906, was discovered and captured on Fernandina Island by members of the Giant Tortoise Restoration Initiative (GTRI). The tortoise appears to be at least 100 and taken to the Giant Turtle Breeding Center in Santa Cruz, where it will be cared for while the expedition returns to the 638 square km (246 square miles) island. (Photos here.) How does something that big and slow hide and survive in such a tiny patch? No humans, or course. The two who discovered it — Jeffeys Malaga and Washington Tapia – are optimistic about finding more because they found excrements in other areas of the island that couldn’t be from this one because they were separated by lava flows from recent volcanic eruptions.

“It was absolutely breathtaking to see this “flying bulldog” of an insect, to have real proof right there in front of us of it in the wild.”


On January 25, 2019, natural history photographer Clay Bolt, entomologist Eli Wyman, behavioral ecologist Simon Robson and ornithologist Glenn Chilton joined the short list of just two other people who have ever seen a living Wallace’s giant bee (Megachile pluto), named for the first person on the list — naturalist Alfred Russel Wallace who discovered them in 1859 while exploring Bacan Island, part of the North Maluku islands of northern Indonesia. American entomologist Adam Messer became the second in 1981 when he saw one on Halmahera island. Last year, two specimens of the insect sold on eBay for thousands of dollars, so Bolt and company felt they had a chance to see one themselves.

“I climbed up next and my headlamp glinted on the most remarkable thing I’d ever laid my eyes on. I simply couldn’t believe it: We had rediscovered Wallace’s Giant Bee.” 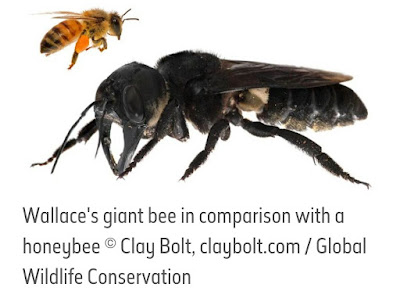 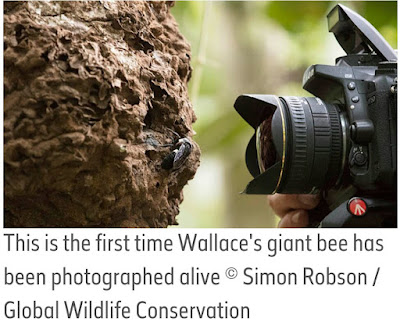 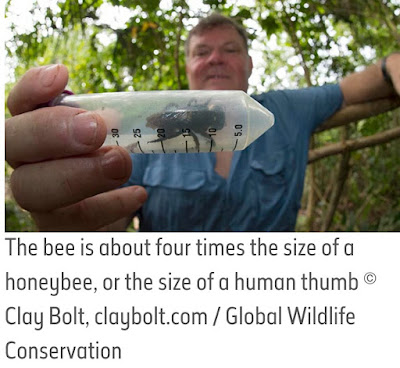 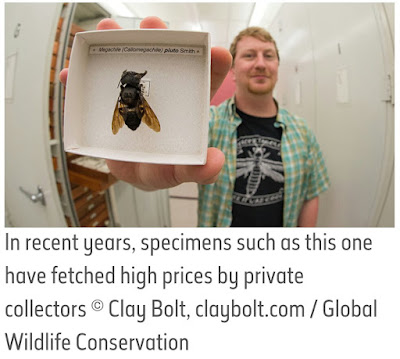 Bolt recounts the story on the Global Wildlife Conservation blog. After five days of searching termite nests (where the giant bees were thought to feed), Bolt saw one about eight feet up a mound (he climbed a tree to look in). After waiting a few hours for the female to come out for a selfie, the team got tired and poked the 1,5 inch (thumb-sized … yikes!) giant bee with a blade of grass. That did the trick and she crawled out for her close-up … and was immediately captured in a large tube! After taking a number of out-of-proportion pics of themselves holding what looked like the bee that ate Cleveland, they released her from the tube and Bolt got the flying money shots. (See the photos here.) 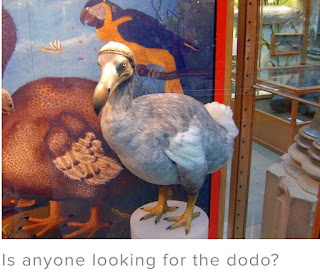 Did they follow the bee back to its hive and gorge themselves on giant bee honey while fighting off an army of angry monster worker bees? That would make a good movie but Bolt says the team was out of time and returned to the U.S. to brag … and philosophize.

“But no matter what, just knowing that this bee’s giant wings go thrumming through this ancient Indonesian forest helps me feel that, in a world of so much loss, hope and wonder still do exist.”


Two thought-to-be-extinct creatures being found IS hopeful, although they’re still endangered. Can they and other on-the-edge-of-extinction species be saved? That’s up to their greatest enemy … us.