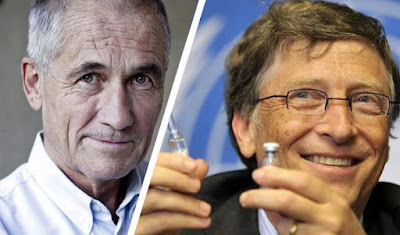 The Facts:The Cochrane Collaboration recieved a $1.15 million donation from the Bill and Melinda Gates foundation, and lo and behold, a little over a year later, Cochrane was busy putting out a review that sang the praises of the HPV vaccine.

Reflect On:If we know that our healthcare industry is nothing more than a business that is only concerned about profit, can this knowledge be more that a source of frustration and actually contribute to our awakening?

Anyone who has looked into the inner workings of the Western healthcare system–especially with regards to the relentless promotion of vaccines–can see that it is primarily a ‘business’, where ‘health’ is secondary at best. Following the money shows that vaccine research is primarily funded (or pseudo-funded through shell companies) by the pharmaceutical industry.

Such industry-funded research is demonstrably structured in ways that ensure that vaccines can be said to be safe and are not causally linked to serious conditions like autism. As this Health Impact News article points out,

ALL industry funded studies are designed to protect the company’s financial investment. That is THE overriding primary bias. In vaccine clinical trials in particular, there is a built-in bias; namely, the comparator arm. The so-called “placebo-controlled” comparative vaccine studies do not use a genuine placebo. They include an adjuvant such as aluminum or mercury in the so-called “placebo” comparators both of which generate serious adverse effects. They use these adjuvants precisely in order to mask the serious risks posed by vaccines.

But even this strategy is not fool-proof, and when things don’t work according to plan, more direct means are employed. As we saw in the case of CDC researcher William Thompson, deliberately deleting or fudging data is often in play if causal links with serious conditions like autism are indeed established in their studies. And the fraudulent behavior that we actually hear about is probably just the tip of the iceberg. For every brave whistleblower like Thompson who risks his livelihood, reputation, and possibly even his life to bring this information to the public, the vast majority of people privy to this knowledge have likely been kept silent by the carrot (continued employment and funding, promotions, outright bribes) or the stick (fear of loss of employment, damage to reputation, physical harm, or murder).

A supposedly neutral government agency, the Centers for Disease Control and Prevention (CDC) uses studies funded by the pharmaceutical industry to give the official government stamp of approval on vaccine safety. Furthermore, the CDC is a business partner of the pharmaceutical industry, acting as a wholesaler and distributor of vaccines with an annual purchasing budget of $4 billion. Conflict of interest? Nothing to see here, right?

Probably the only hope for people who want the objective truth about vaccine safety is with independent research companies. Sadly, it looks like one of the biggest and most respected companies of this kind have fallen under the control of corporate big money.

The Cochrane Collaboration, now known simply as Cochrane, is an international and independent non-profit organization established in 1993 aimed at providing up-to-date, accurate information about the effects of healthcare available worldwide. Cochrane produces and disseminates systematic reviews of healthcare interventions and diagnostic tests, and promotes the search for evidence in the form of clinical trials and other interventional studies.

Up until recently, the Cochrane Collaboration had been considered the “gold standard” in scientific integrity. That is, until it started making the move a few years ago from being a principled, proudly independent research company to one that started to come under the influence of certain sponsors based on ‘donations’ like this one proudly announced on their website: 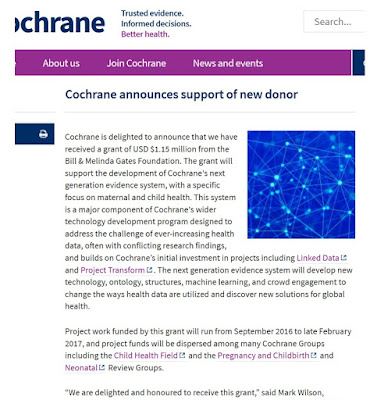 Once again, we are starkly confronted with what seems to be the underlying reality of the world we live in. Do we see any conflict of interest in the Cochrane Collaboration accepting over a million dollars from HPV vaccine-pusher Bill Gates? Do we have any reason to believe that this donation is designed to ‘support the development of Cochrane’s next generational evidence system,’ or do we suspect that this is just a bribe to garner Cochrane’s support and seal of approval for the HPV vaccine?

Well, fortunately, we didn’t have to wait very long for the answer to that question. A Cochrane Systematic Review from May 2018 entitled ‘Prophylactic vaccination against human papillomaviruses to prevent cervical cancer and its precursors‘ appears as the perfect payback for Gates’ ‘donation’ a mere year and a half earlier. In it, the reviewers came to conclusions that were sure to have pleased Gates:

There is high‐certainty evidence that HPV vaccines protect against cervical precancer in adolescent girls and young women aged 15 to 26…We did not find an increased risk of serious adverse effects. Although the number of deaths is low overall, there were more deaths among women older than 25 years who received the vaccine. The deaths reported in the studies have been judged not to be related to the vaccine. Increased risk of adverse pregnancy outcomes after HPV vaccination cannot be excluded, although the risk of miscarriage and termination are similar between trial arms.

For some of the researchers affiliated with one of Cochrane’s regional member centers (the Nordic Cochrane Centre), Cochrane’s HPV review was so biased that they felt compelled to write an exhaustive critique of  it, entitled ‘The Cochrane HPV vaccine review was incomplete and ignored important evidence of bias,’ published in BMJ Evidence-Based Medicine. Their conclusions demonstrate that they have taken notice of the change of policy at Cochrane and saw evidence of undue influence and conflicts of interest:

This review was co-written by one of the ‘old guards’ of the Cochrane Collaboration, Peter Gotzsche. Peter has published more than 70 papers in “the big five” (BMJ, Lancet, JAMA, Ann Intern Med and N Engl J Med) and his scientific works have been cited 30,000 times (source). With about 80 others, he helped start The Cochrane Collaboration in 1993 with the founder, Sir Iain Chalmers, and established The Nordic Cochrane Centre the same year.

Among other things, Peter has been an outspoken critic of the pharmaceutical industry, and saw his role in the Cochrane Collaboration as a counterbalance to their undue influence in the healthcare field. He is the author of the book Deadly Medicines and Organized Crime: How big pharma has corrupted healthcare. The video below will give you a taste of his stance on the pharmaceutical industry: 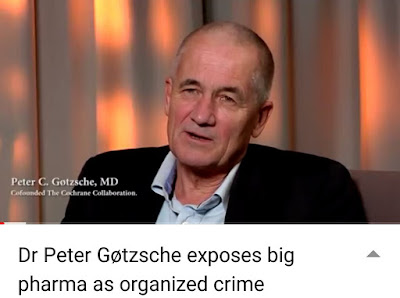 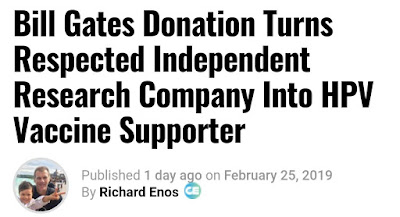