教皇: 那些指控教會的人是魔鬼的朋友
Pope Says Those Who Accuse the Church Are Friends of the Devil

Those who spend their time accusing the Church show themselves to be friends and family of the devil, Pope Francis said Wednesday.

The “fashion” today is to destroy the Church with words, the pope said on the eve of the Vatican summit on clerical sex abuse, but this does not come from God but from the devil.

“Because the Church is holy, she is the Bride of Christ, but we, the children of the Church, are all sinners – some big ones!” Francis told a large group from the southern Italian province of Benevento, speaking of how Saint Padre Pio loved the Church as she was.

The pope said that it is fine to point out flaws so they can be corrected, but if this happens without love for the Church, “that is of the devil.”

This is not the first time that Francis has likened accusers to Satan.

Last September, Francis said that the devil, the “Great Accuser,” had been unleashed against the bishops of the Church, in what many understood as a reference to a Vatican whistleblower, a former papal nuncio to the United States.

The nuncio — Archbishop Carlo Maria Viganò — had accused a number of prelates, including the pope, of dereliction of duty in dealing with clerical sex abuse.

In an 11-page testimony published on August 25, Viganò claimed that he had personally informed Pope Francis in 2013 of the serial homosexual abuse perpetrated by then-cardinal Theodore McCarrick, along with sanctions imposed on him by Pope Benedict XVI, and yet said the pope had lifted those sanctions and rehabilitated McCarrick to a position of influence in the Vatican.

“The Great Accuser, as he himself tells God in the first chapter of the Book of Job, roams around the earth looking for someone to accuse,” Francis said in his morning homily at Mass in the chapel of the Santa Marta residence in the Vatican.

In these times “it seems that the Great Accuser has been unleashed and has it in for the bishops,” the pope said.

“It is true, we are all sinners, we bishops,” he said, but the Great Accuser “seeks to unveil sins so that they may be seen, to scandalize the people.”

That same week, the pope preached a second homily, making a series of similar points.

We cannot “enter into the logic of the accuser,” he said, because “the only legitimate accusation that we Christians have is to accuse ourselves. For others there is only mercy, for we are children of the father who is merciful.” 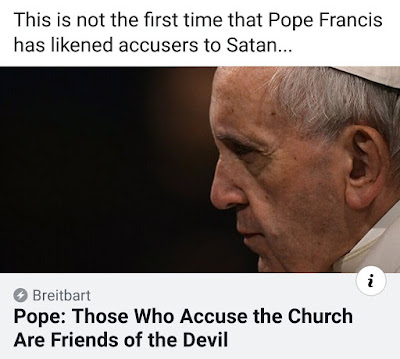