Over the past year or so South Africans have been so focused on the implications of land seizures that the ANC’s plan for the country, that I believe they might have overlooked one of the most dangerous elements to South Africa’s future on the African continent as a whole.

First we gotta realise that China sucks. China holds the all-time world record for the number of your own people killed off due to self-induced starvation, which sits at between 30 and 60 million people starved during the great leap forward. During the 1960s under MAO.

One day he also woke up and was like, hey let’s kill all the birds and so they did. Nature sucks in China, thats why the prime champion for pollution in the world is of course the chinese.China has 18 of the worlds 20 most polluted cities in the world.

Even the United Nations didn’t actually recognise China as China until the 1970s because taiwan was actually the real government of China, they were just driven out during the Chinese civil war in which the Communists took over.

After that, religion is also banned in China in the form of State Atheism. All of this basically means China is this planned communist economic dystopia

Economics are pretty much the only people that like China for some reason. I guess it’s because they have achieved the total growth productivity in a materialist oriented way of running a country, which basically corporations secretly loves and wants for the entire planet.

China is really pre-match copy and paste, like the shirt you wearing, the Eiffel tower or the Chengdu F’7Ni Widdow Maker, or just themselve. They even have their own internet where you get a few cents per post when you post something positive about the government

It’s no wonder that the folks living in such a place seems to have been stripped of all semblance of humanity, to a point when someone injured around them does not elicit any emotional response. Couple this lack of empathy with a government that wants to be the worlds factory and you have a great recipe for the worse working conditions known to man, where things break crush or incenerate people on a regular basis…but who cares, they have a lot more people where that came from.

Now, economists might not agree with me, but essentially China’s massive economic power is an inflated meme, mostly due to its population size. All they can do is injest natural resources and spew out cheap crap that bends, snaps, crashes or spontaneously combusts if you so much as stress test it. A lot of its growth is just thanks to constantly building useless crap essentially

To be the disaster factory that it is China needs resources. To secure these resources it needs political influence and military power.

As we all know China has been looking to Africa into being its piggy bank of raw materials. South africa of course being one of china’s biggest trading partner not just because of BRICS, but because South Africa quite literally supplies all of it chromium.

The Chinese needs chromium that is later used for steel manufacturing. However they now seek to cut out the middle men, that being the African governments themselves, and they are moving in for good.

China loves to build things. They build dams and roads in Africa, with the only cost being the countries basically selling their souls to the Chinese. That means Chinese workers coming to take those resources back to China. We have Chinese equipment and Chinese facilities especially built for them in a deal that basucally states that the resources still on the ground basically already belongs to China. China puts France to shame when it comes to indirect colonialism.

You can go to Angola and find  pre-built cities waiting for its Chinese colonizers. They are planning ones for South Africa too. Heck why do they even need to fit in when the South African government can outrightlt just classify the Chinese as an honorary blacks so that they can enjoy the full benefit of affirmative action while African migrants are being butchered in xenophobic attacks…. oh wait they have already done that.

Recently angry South Africans have been tweeting about the new Chinese police stations. Supposedly the 13th such ones in South Africa that was opened in Port Elizabeth by a very uncomfortable looking provincial commissioner lol.

This whole thing was organised by the Chinese Community and Police Coperation Centre, the CCPCC. The CEO of this organisation insists that it is not a Police station, only a form of liason between the Police and Chinese nationals living in South Africa. The second function that it emphasises is that of a language program.

There is a Chinese program in which they train South African officers to speak basic Mandarin. A statement released by the Chinese consulate general confirmed that this initiative is as a result of the murder of a Chinese national this february. What is South Africans are doing is that they’re effectively paying to delegate many policing duties in areas with many residents of Chinese origins all over the country to this Chinese organisation.

If you look at the rest of Africa you will find out that nearly all Chinese nationals are part of the new 60 billion industry that is Chinese INVESTMENT in African infrastructure. The Chinese are mad they lost resource rich West Africa to the United States and France. So now they have trained their eyes on the South.

South africa is a promising new target for the covert colonization of Africa. If china waits until the shit hit the fan, the americans of the french will jump in, and as such miss their shot. So they have to start now if they want to assured South Africa will be a captive market.

They have already started. Earlier this year South Africa began to fall into the depths trap that has befallen so many poor smaller african countries like Zambia already.

In September South Africa’s new President Cyril Ramaphosa accepted a R370 billion loan from China that it will be incapable of paying back. On top of the $60 billion of loans that China pours into the rest of Africa annually. 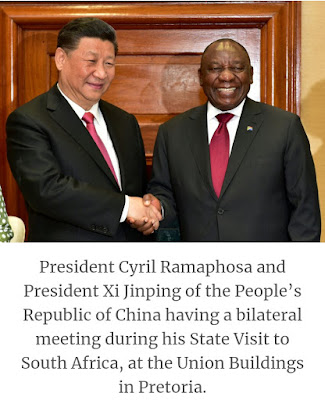 Then in the same vein it is announced that China will build a new power station in Limpopo reportedly to boost South Africa’s suffering power grid, but in reality it is meant to be used exclusively for the proposed industrial zone which two would be entirely under control of the Chinese government.

South Africans are angry migrants are coming to steal their jobs, Nigerians are coming to steal their women and so on. They should be angry that their governments is basically delegating duties to an organisation control by the Chinese government. They should be angry that their government is irreversibly selling their country to a foreign power so that they can continue stuffing their pockets with incomes from unpayable loans and unprofitable investments, why leaving the rest of the country to deal with the fallout.

I don’t think China isn’t playing the long game here. They have been increasing their military presence in Africa for quite some time. Perhaps the most stunning development of late is the deployment of two batteries of China’s most advanced Surface to Air Missiles in ZIMBABWE !!! 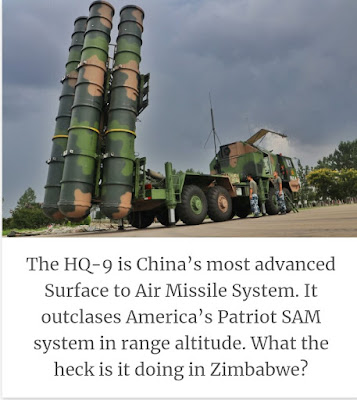 I mean, it doesn’t take much of mental gymnastics to wonder who their advanced surface-to-air missiles installations are meant to the deter. I don’t think it’s Botswana, or Zambia or Angola.

I think it might very well be a move against the United States denying China their piggybank. After all they already have taken over West Africa, its only fair they leave Southern Africa to China.

Lastlt, there’s a good reason to believe the expropriation of land from Afrikaans without compensation is also fueled by Chinese interests AFRI FORUM has already suggested. I mean it should not be strange at all as during the cold war the Chinese basically thoughts black nationalist how to employ terror tactics in a population in order to exert control they were also one of the main suppliers of weapons to them as well as the soviets

The scramble for Africa is steaming up folks. I suggest you grab your popcorn. With %30 of the worlds natural resources in Africa it’s gonna be a very interesting couple of years in the global power struggle for control and dominance. 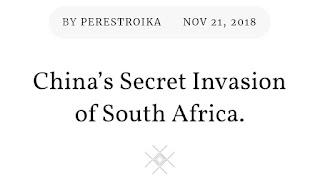 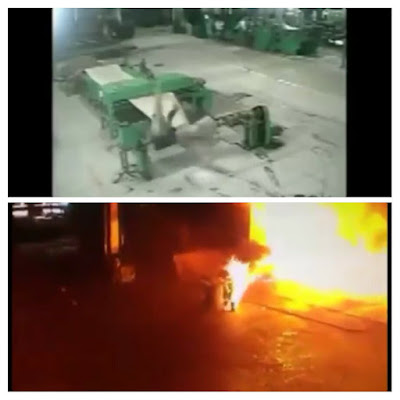 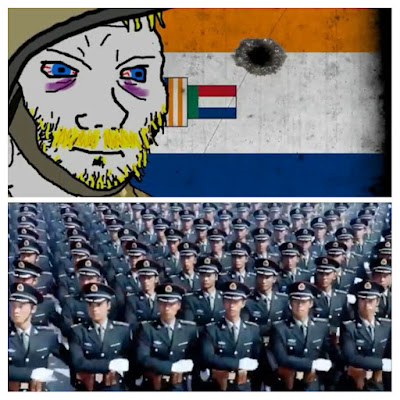 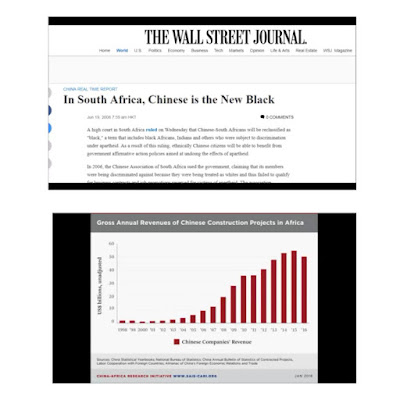 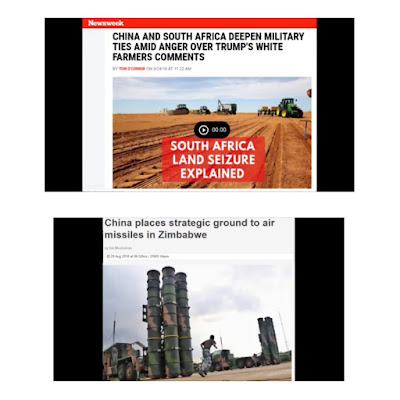 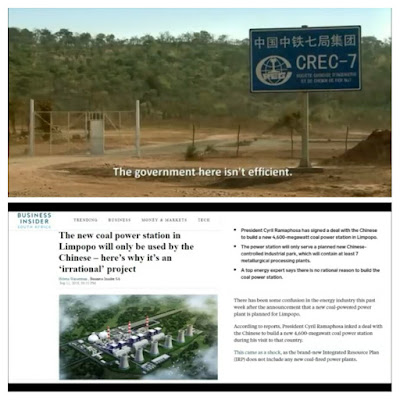 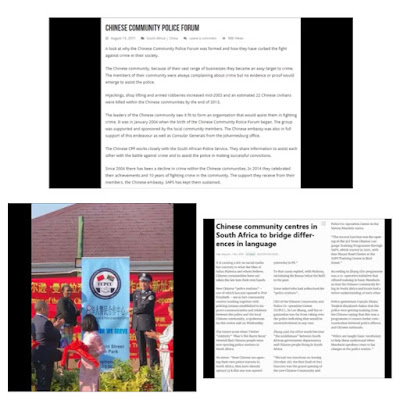 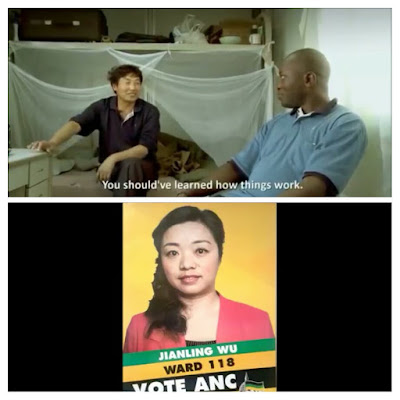